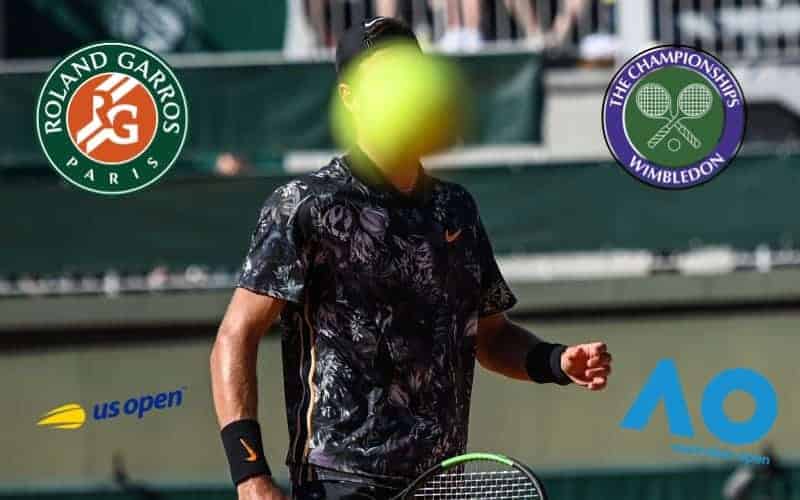 For many of us, our first experience of the game of tennis is gained from watching the world’s best players battling it out for a major trophy on television. The highest profile tournaments, and the ones almost everyone watches first, are those which are now known as the ‘grand slam’ events. These offer the most prestige for the players, as well as, usually, the highest prize money. Among the all-time greats of the game, the number of grand slam titles won is often used as a means of measuring who had the greatest career.

The tennis grand slams are the four most prestigious events, consisting of Wimbledon, the US Open, the Australian Open and the French Open. Oddly, the term ‘grand slam’ is derived from a term used in card games. The players with the most grand slam titles are vying to be known as the GOAT, a battle which is still ongoing.

What Is A Grand Slam In Tennis?

To be accurate, the term ‘grand slam’, in a tennis context, refers to the extremely rare achievement of winning all four major tournaments in a single 12-month period. In more recent times, however, the term has been used to refer to each of the four individual tournaments that make up a true grand slam.

Thus, it might be said that Roger Federer has won 20 ‘grand slams’, but this would mean 20 tournaments, not 20 sets of four!

What Are The 4 Grand Slams?

The grand slam events are those which for many years have been designated as the most important in the game. There have been four such events since 1925 when the French opened up their national championships to players based outside France. The tournaments are Wimbledon, the French Open, the Australian Open and the US Open.

Why Is It Called A Grand Slam?

The term ‘grand slam’ originated in whist-type card games, when it referred to winning all of the tricks, and it was subsequently used in contract bridge. The term was next adopted by the sport of golf to refer to the winning of all four major titles, and this in turn led to its use in tennis for a similar achievement.

In more recent times the term has been applied to describe any one of the four major titles, but this is inaccurate and a little confusing.

Male Players With The Most Grand Slam Titles

Tennis fans have been fortunate in recent years to see three of the game’s all time greats, Roger Federer, Rafael Nadal and Novak Djokovic, battling for supremacy. Each of these players would like to be remembered as the Greatest Of All Time (GOAT), but to do so they will probably need to win more individual ‘grand slam’ titles than either of the other two.

At present, Federer and Nadal have each accumulated a remarkable 20 titles, with the slightly younger Djokovic just behind on 18. The next highest on the all-time list is the long-retired Pete Sampras with 14.

Federer has shown remarkable longevity, but it will be an amazing achievement if he adds more than one to his total in whatever time his career has left to run. Nadal is also nearing the end of the road, but his dominance on clay is such that he could still add two or three more French Opens if he stays fit. Djokovic has the best chance of finishing with the highest total, but anything could happen over the next couple of years.

Female Players With The Most Grand Slam Titles

A different kind of drama is playing out in the women’s game. The highest all-time number of singles titles was achieved by Australia’s Margaret Court, with 24. 11 of these were earned at the Australian Open, during a period when many of the top players did not enter it, but nonetheless it is an impressive figure.

Just one behind on 23 sits the legendary Serena Williams, now reaching the end of her career but determined to at least match Court’s record before she retires. This pursuit has particularly captured people’s imagination because Court’s apparently homophobic views have rendered her a divisive figure.

Although she has come close on several occasions, Serena has not won a ‘grand slam’ singles event since early 2017, and it is beginning to look increasingly like she may have to settle for second place. No other current player is close, although Steffi Graf retired with 22, Helen Wills Moody accrued 19, and Chris Evert earned 18.

The ‘grand slam’ tournaments are the most prestigious and glamorous events in tennis. All of the best players are desperate to win them, both for the immediate glory and the long-term perception of their career. The battle to be regarded as the GOAT is ongoing in both men’s and women’s tennis, and each has its own dramatic storyline. If you get the chance to attend one of the major tennis events, make sure you take the opportunity to witness all of the drama first-hand.