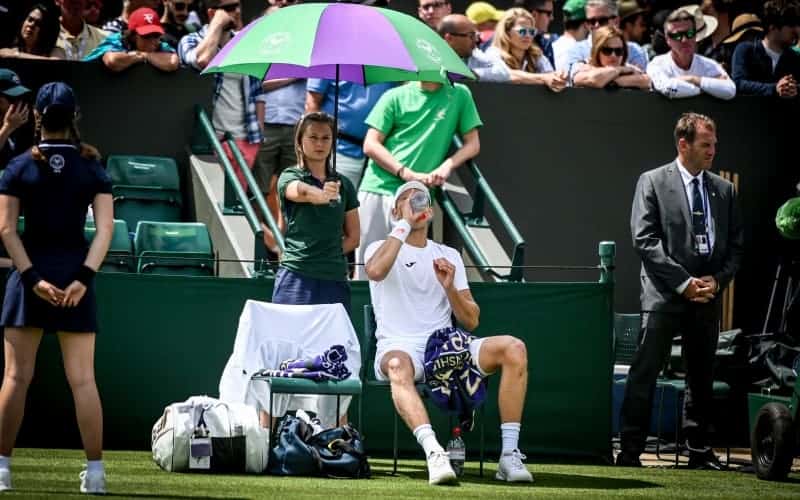 The Championships at Wimbledon in Greater London is the oldest and most traditional of the four major tennis tournaments making up the grand slam. It is still played on grass, and players are required to wear predominantly white clothing and shoes. It is synonymous with enjoying top class tennis whilst eating strawberries and cream in an, admittedly rather crowded, immaculately kept grassy oasis.

In this guide, we will give you all of the important information about the event, including typical tournament dates and the cost of tickets. We will talk more about some of the most famous traditions, including the ongoing preference for grass courts, the quirky trophy design, and the reasons for the high status of the tournament.

Why Is Wimbledon Played On Grass?

The game of lawn tennis was devised in the 19th century. For much of the 20th century, three of the four major championships (the exception being the French Open) were played on grass. Although the US and Australian Opens eventually began to use hard courts, the All England Club, who run Wimbledon, were not keen to change.

Perhaps the strongest reason for sticking with grass is the fact that it is traditional, and Wimbledon is all about tradition. Many would argue that it is also good for the sport, as grand slam events played on hard courts can begin to look very similar, whereas grass is visually distinct and requires a different game style.

Why Is Wimbledon Considered The Most Prestigious Tournament?

Wimbledon’s prestige has a lot to do with the fact that it is the oldest of the four Grand Slams. The All England Club tries to maintain something of an ‘old world’ feel to the event by retaining rules like the requirement for clothing and footwear to be ‘predominantly white’, which were long since abandoned elsewhere.

Staging the tournament on grass also contributes to the feeling that you are playing tennis the way it used to be played. Competitors are encouraged to feel that they are fortunate to be playing at the historic home of the game, which enhances the prestige of the event. The All England Club has also continued to develop the facilities, with two courts now having a retractable roof, so that the site still stands in comparison with those of the other major events.

Why Is There A Pineapple On The Wimbledon Trophy?

The presence of a pineapple on the top of the Wimbledon men’s singles trophy is one of those oddities for which nobody has a definitive explanation. There are three popular theories.

Firstly, it may be mimicking the tradition of British Navy Captains placing a pineapple on top of their gatepost when they returned from sea, implying celebration and hospitality.

Secondly, it may simply be a reference to the association of pineapples with wealth, particularly in the 17th century when they were regarded as rare and exotic, and could only be purchased by the rich.

Finally, in the 18th and 19th centuries, pineapples were often included in paintings to represent hospitality and symbolized the welcoming of guests. Whatever the precise explanation, the trophy has become iconic in the world of tennis.

When Is Wimbledon Played?

The Championships take place between late June and mid-July, a few weeks after the French Open. For 2021, the dates are Monday 28 June until Sunday 11 July. Scheduling the event in the middle of the English summer gives the best chance of dry weather.

How Much Do Wimbledon Tickets Cost?

The All England Club takes an interesting approach to ticket prices, meaning that they are not as easy to access as those for the other major championships. Ground-pass tickets cost about £25, while main court tickets cost between £43 and £225. Companies and investors can also purchase hospitality packages that have main court tickets.

If you are wealthy, you can buy a ‘debenture’. This is a traded security, the most recent version of which was issued at a cost of £80,000 for Centre Court, and which covers a five-year period.

In return for this kind of money, the All England Club offers a ticket for a specified show court (the debenture prices vary by court) on each day of the Championships, plus a variety of perks like special lounges and restaurants. Debenture holders are free to resell their tickets by whatever means they choose.

Companies can purchase corporate hospitality packages, allowing them to entertain clients and guests at the Championships. These are not cheap either, being likely to cost something in the range of £1-10,000 per person.

After the rich investors and corporations have had their pick of the tickets, the remainder of the show court tickets are normally sold to the public by means of a range of ballots. These ballots are necessary because ticket prices are kept lower than the free market price, which explains why ticket holders, other than debenture holders, are banned from reselling them.

In 2019, Wimbledon show court seats were priced between £43 and £225 for days when main draw matches were scheduled. There was a ballot for the general public, but, on top of this, a number of tickets were distributed to tennis clubs, who would normally hold ballots among their membership to distribute these. Another batch of tickets was made available to people who fulfilled voluntary roles within the game.

It is also possible to obtain ground passes at Wimbledon, for around £25, to watch matches on the outside courts and soak up the atmosphere. Some of these are offered to coaches and players, but the bulk is normally distributed via a queue outside the grounds, which can form hours or days in advance.

The queue is another of Wimbledon’s great traditions, and the excitement is enhanced by the fact that the first few hundred in the queue each day earn the right to purchase show court tickets.

In 2021, because of the uncertainty about capacity due to coronavirus, there will be no ballots or queue, with the relevant tickets being sold online instead.

Wimbledon is a unique and historic event. You should try to visit at least once in order to experience the atmosphere.

The French Open is played in Paris, on the European clay courts at Roland Garros. It is the only one of the four major championships played on clay, which means that it produces a very different...