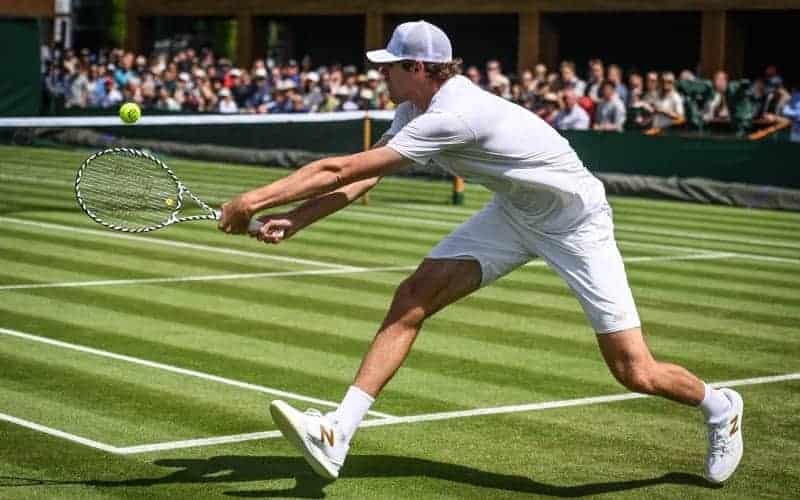 Although it is played all year round across the world, a lot of us still see tennis as a summer sport. Wimbledon encapsulates this, with its grass courts and strawberries. When Federer or the Williams sisters step out into the glare on the almost permanently sunny Centre Court (or perhaps the fluorescent lighting, with the rain beating down on the roof!), they are always in pristine white outfits, presenting an extremely summery image. Roger somehow seems to look cleaner than humanly possible, even after he has played.

Nonetheless, it’s not just the champions who wear white at Wimbledon: anyone who does not will be quickly escorted off the court to change. There are a number of clubs around the world that operate a similar rule. So, where does the idea of wearing white clothes for tennis come from?

There are 3 main reasons for the white clothing rule: historic social trends, club traditions, and the way it reflects heat. Historically, white clothes were a symbol of wealth and class which is why some clubs only allow this color. Additionally, white clothes absorb less heat – which helps players stay cool throughout the match.

Let’s look at the logic behind the use of white clothing in general, and then focus on the place where it is most famously required.

Scientists will tell you that white material reflects as much of the visible spectrum of light as possible, so it does not absorb much heat. This means that if you are going to play sport on a hot day, white clothing will keep you cool. So far, so logical, but that does not explain why players should not be given the choice of what color to wear.

In fact, the idea of white outfits for sport goes back to the 17th century, when the first mention is found of a tennis player wearing white. This may have been to stop them from getting too warm, but social pressure would soon become a major factor.

Gradually, all-white was adopted as the leisurewear of the wealthier classes on both sides of the Atlantic. This was partly a status symbol: the working classes could hardly wear white clothing in their daily lives, as any dirt was obvious. Those who did wear it were basically saying that they were upper class and did not need to work. White clothes also tended to be expensive, reinforcing their association with the social elite.

Nonetheless, gradually, the middle classes also adopted the trend, in order to present a successful image. By the early 20th century, participants in summer sports played by the wealthier classes, like tennis, cricket, bowls, and croquet, were expected to wear white.

Wimbledon is run by the All England Lawn Tennis and Croquet Club (AELTC), who see their job as putting on a great tennis tournament while maintaining the traditions of the club. With the trend towards white clothing for summer sports, it was no surprise when, in 1890, the club introduced a requirement for predominantly white clothing to be worn by all players.

During this era, such rules were common, but in recent years other major tournaments have decided that players can be allowed the freedom to dress in whatever colors they like. Wimbledon has emphatically not followed suit, with the AELTC making their requirements even stricter. They see the traditions of Wimbledon as part of what makes it unique and have no plans to change this rule.

The Wimbledon dress code for players currently extends to 10 paragraphs. In summary, players have to wear clothing that is ‘almost entirely white’. They need to be careful when doing their washing, as ‘off-white’ and ‘cream’ are excluded. Colored trim or small areas of color in a pattern are allowed if the colored part is no more than 1cm wide.

These same rules apply to everything from caps to tracksuits and medical supports. Even underwear that might become visible has to be white! Logos are outlawed, and shoes are subject to strict requirements. These rules have been tightened up by the AELTC in recent years so that some outfits which were acceptable a few years ago are no longer allowed.

The rules are a lot more relaxed for spectators, and as long as you are not expecting to be invited into a Members’ area or a hospitality suite you can more or less wear what you like. If you are watching the matches on Centre or Number One court, smart casual dress is preferred but will not be strictly enforced.

Ripped jeans, vests, sports shorts, and dirty trainers are discouraged, but the key thing to avoid is clothing with political slogans or large logos. The club expects to avoid ambush marketing and political protests, so the security staff will be on the lookout for this kind of thing. Apart from that, feel free to dress comfortably, and keep in mind that even in England it can get very hot sitting in the sun watching tennis.

The requirement to wear white clothing at Wimbledon, as well as some other clubs, can be looked at in two ways. Some will think that it makes players look smart and clean, and the rule should be retained in order to keep the old-school qualities that make the game what it is. Others would say that it comes from the days when only the wealthy or upper-class could play, and it emphasizes the fact that tennis is not an inclusive sport.

In my opinion, it is fine at Wimbledon, where the world’s top players are happy to dress up and pretend they are in the 19th century. If the club wants to retain its traditions for marketing or other reasons, they are not doing any harm. I worry more about other clubs that still apply this rule. If even one person is made to feel uncomfortable or unwelcome by the image or expense of all-white clothing, then the rule is not good for the game.