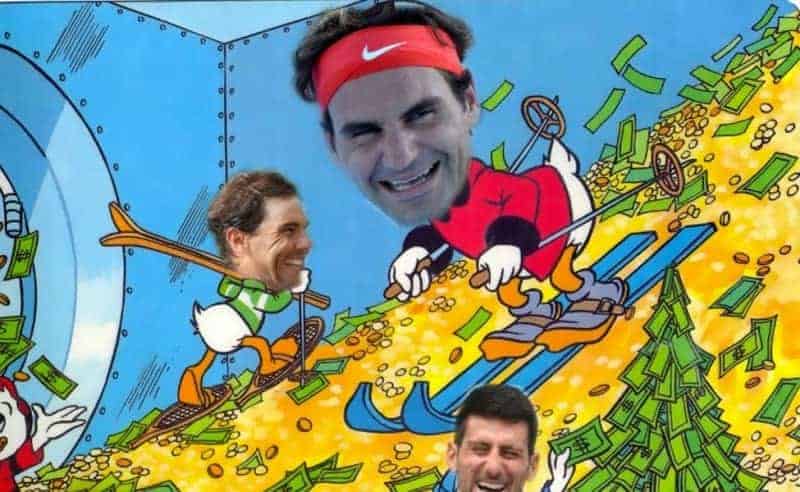 At one point or another, we have all wondered what it would feel like to live the life of a famous athlete. You get to be recognized for your talent anywhere you go, you get to do what you love in front of millions of people, and – on top of that – you still get paid more money than you can possibly count.

The majority of the highest-paid athletes play team sports like soccer, football, or basketball since a great share of their income comes from the salary they get paid by their team. Tennis players do not get paid a salary, so they rely mostly on other sources of income. And yet, the top tennis players still get paid pretty well – Roger Federer was the #5 highest-paid athlete in 2019, making about $93.4 million, while Novak Djokovic came in #17, with a total of $50.6 million.

So how do tennis players get paid? Professional tennis players get paid through 6 different income sources: tournament prize money, appearance fees, endorsement deals and sponsorships, exhibition fees, bonuses, and club tennis deals. The ranking, nationality, and popularity of players will determine how much they get paid from each source.

Players who qualify to play in Grand Slams and in big tournaments will earn significantly more money than players who get most of their points playing Futures or Challenger tournaments. In addition, popular players can score more lucrative sponsorship deals. We will cover the 6 ways tennis players get paid more in-depth below.

One of the main ways tennis players get paid is through the prize money they receive from participating and winning rounds in tournaments. The level of tournaments a player participates in will determine how much money he or she will make. In 2019, Roger Federer made $7.4 million in prize money (roughly 8% of his total income), while Djokovic made $20.6 (about 41% of his total).

Tennis players get paid even if they lose. The way the prize money works is that – before a tournament starts – the tournament’s organization announces how much money a player will make depending on which round he or she exits the tournament. There is always a flat amount that players will receive just for participating, even if they lose in the first round. If players continue winning, they will increase the amount they get paid.

Below is the prize money distribution for the 2019 US Open, in which you can see how much each player gets paid depending on the round they exit the tournament. The numbers are the same for both men and women.

Pretty hefty amounts, no? Making $58,000 for one match doesn’t sound too bad after all. However, notice that in order to qualify for a Grand Slam like the US Open, you mostly need to be ranked among the 104 best players in the world (see all ways to qualify for a Grand Slam here). Unfortunately, this reality is not enjoyed by every professional player. Below is a breakdown of the prize money of a 125 Challenger tournament, which is played mainly by players in the 80 – 200 ranking range.

So just to recap, this is how much the winner of each tournament makes:

This just goes on to show that while some tennis players get to enjoy a pretty glorious life, others struggle to just break even. And they need to find other sources of income, which is one of the other options below.

In addition to taking a share of the official prize money, the best players still get some big checks when it comes to appearance fees. The top players like Federer, Nadal, and Djokovic already have so many ranking points that they have very little incentive to play smaller ATP tournaments. However, every tournament director dreams and hopes to have these main players in their tournaments, since they are able to sell more tickets and make more money.

It is estimated that Roger Federer charges about $1.1 million in appearance fees in order to participate in smaller tournaments like ATPs 250. Rafael Nadal and Novak Djokovic, in turn, charge roughly $900,000. Players who rank between 30 and 50 might get appearance fees for playing in challenger tournaments, but their income will be a lot smaller.

The biggest source of income from most players is endorsement deals and sponsorships. In 2019, Roger Federer was sponsored by Rolex, Mercedez-Benz, Credit Suisse, Jura, Barilla, Moet & Chandon, Lindt, Wilson, Uniqlo, Netjets, Sunrise, Rimowa, and On Running. These deals paid him an estimated $86 million in one year.

In endorsement and sponsorship deals, all a tennis player needs to do is to be an ambassador for the brand. Players will show up in a few commercials for the brand or wear gear provided by the brand, and in return make a lot of money. Brands generally look for players who have a strong fan base and who will represent the brand in a good way.

A player’s nationality plays a big role when it comes to endorsement deals. In some countries, like Spain and Argentina, tennis is one of the main sports and the number of fans is larger, giving brands a greater incentive to sponsor athletes. In other countries, tennis is somewhat of a neglected sport and players have a harder time getting good deals. It is also interesting that the deals a player gets will depend on how many other popular tennis players a country has. For instance, Kei Nishikori is by far the best Japanese tennis player of all time; consequently, he makes over $30 million a year in sponsor deals. In contrast, Roberto Bautista Agut – who is ranked better than Nishikori – comes from Spain, the same country as Rafael Nadal, so he ends up being left aside and not scoring great deals.

Another way tennis players can make some big money is by playing exhibition matches. This is a good source for income not only for the top 100 players but for players from every ranking. Whether you are a respected player worldwide or in your small town, you might get paid for showing up, playing, and entertaining a crowd.

In 2019, Roger Federer played a set of 5 exhibition matches in South America, and it was estimated that he received about $2 million dollars per match. One of the matches ended up being canceled, so Federer was left with a total of $8 million for the week. Not that bad, at the end of the day.

The ranking established by Forbes only takes into consideration the money players make from endorsements and prize money, so anything players make from exhibitions and appearance fees is on top of the recorded numbers. The exact numbers for exhibition fees are hard to determine since these transactions are done behind the scenes. However, players generally play about 3 or 4 exhibition matches a year, so that can bring in roughly another $1 to $5 million for the top players.

Players with much lower rankings will only receive a much, much lower fraction of that amount. However, earning a few thousand dollars can help significantly – especially considering that winning a lower-level tournament only pays you $3,600.

The 5th way players get paid is through bonuses related to their performance. These bonuses are structured into mostly every player’s sponsorship contract, whether they are sponsored by a racquet manufacturer or a candy brand. These bonuses give the players incentive to perform better, which means that the brand will get more exposure.

Another source of bonuses comes from tournaments themselves. The ATP Finals, which is played by the 8 best players in the season, gives bonuses to players after every match they win. One of the biggest bonuses given in tennis used to come from the US Open Series, which was awarded by the United States Tennis Association. Players use to gain points for their results in a series of US tournaments and the player with the most points after the US Open used to get an extra check for over $1,000,000. Unfortunately, this award was discontinued after 2017.

The last way tennis players get paid is by playing club tennis. The US has a club league that has been growing in popularity recently, called the World Team Tennis. Yet, the most popular club tennis leagues are in Europe, mainly in Germany and Italy. It is not uncommon to see players ranked in the top 30 playing some matches in such leagues.

What is appealing about these club tennis is that they are great ways for players ranked outside the top 100 to make more money than they make in official prize money throughout the year. These leagues only last for a few months over the summer, and clubs will pay players over $10,000 for their participation. In addition, most clubs provide housing and food for players.

Club tennis is a great way for players with lower rankings to pay for their expenses throughout the years. I’ve had several friends who went to Europe for 2 or 3 months, played some club tennis, and made more money than they did playing professional tournaments. They were also able to play Futures and Challengers in weekends when they didn’t have club matches, which allowed them to maintain their rankings. If a player is not ranked high enough to get into the big tournaments or score good sponsorship deals, club tennis can be a great alternative.

While the top players get paid millions of dollars every year, players outside the top 50 need to make money from different sources. Depending on which level of tournament a player qualifies for, he or she can break even with prize money. However, the majority of lower-ranked players gets paid by finding local exhibitions to play in or by spending a few months in Europe playing club tennis.

link to How Much Do Tennis Players Make? - The Ugly Truth

When we think of tennis players, we usually think of wealth and luxury - living in a mansion in Monte Carlo, owning a nice yacht, and travelling around the world. While this lifestyle is indeed...

Continue Reading
link to How Does Prize Money Work In Tennis?

In tennis, how does prize money work? Tennis players are paid according to how well they perform in a tournament. Before a tennis tournament begins, the organization establishes the prize money...