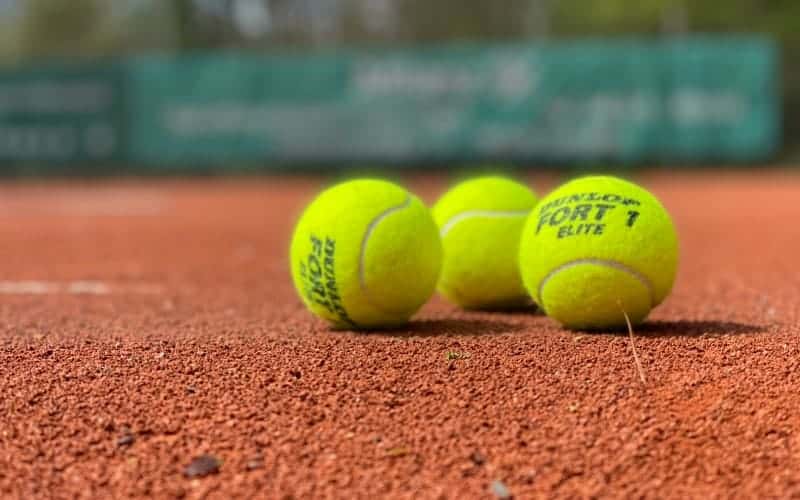 If you just play tennis occasionally, the odds are that, at least some of the time, you use old tennis balls that do not bounce as high as they did when they were new. They are likely to be soft enough that you can partly squash them with your fingers. New balls, on the other hand, are normally supplied in pressurised containers from which you have to remove a metal lid with a ring-pull before you can play with them.

As you open the tube, you will hear a hiss, as air escapes from inside the tube. New tennis balls are firm and bouncy, at least for a couple of weeks until loss of pressure leaves them soft and more suitable for the dog than the court. So why are tennis balls manufactured in this way if they deteriorate so quickly?

Pressurized balls are light, bounce well, and feel good on the racket. The pressurized cans in which they are supplied maintain this condition until they are opened. Non-pressurized balls last a long time and are great for coaching, but they are heavier and don’t feel the same. Pressurized balls have a fairly limited life, although they can be partially restored.

Do Tennis Balls Need To Be Pressurized?

If we value the lightweight and capacity to take spin of pressurized balls, then the answer is a resounding yes. A hollow ball like those generally used, but without a pressurized core, would seem permanently ‘flat’ to a tennis player, and would not offer any of the lively performance which can add to the enjoyment of the game.

By filling tennis balls with pressurized air, we ensure that they are more difficult to compress. This means that when they are squashed a little they recover their shape quickly, causing them to bounce to a good height from the ground or leave the racket quickly.

Why Are Tennis Balls Packaged In Pressurized Cans?

Tennis balls are made with a rubber core which provides a fairly good seal, keeping most of the pressurized air in. Unfortunately, tiny amounts of air can gradually escape if the balls are struck, or even stored at normal atmospheric pressure. To avoid the need to treat tennis balls as perishable goods, a way needed to be found to store them for long periods without significant deterioration.

The answer was to seal them in pressurized tubes, containing air at a pressure of around 26-28 psi, compared to the atmospheric pressure of 14.7 psi. This is slightly higher than the typical air pressure inside a tennis ball, and ensures that air does not leak out while they are being stored for periods of up to two years.

Non-pressurized tennis balls have a thicker, firmer rubber core than pressurized balls. This enables them to bounce similarly to pressurized balls and mimic some of their playing characteristics. As loss of pressure is not a factor, these balls can last a long time, limited only by the rate at which the external felt wears off.

Unfortunately, they are not as pleasant to use as pressurized balls. They tend to be heavier and harder, offering less ‘feel’ and spin than the pressurized alternative, and can be rather tough on the racket arm. Nonetheless, their durability makes them ideal for use in coaching or with a ball machine.

How Long Do Pressurized Balls Last?

There is no definitive answer to this, as the life of a tennis ball depends upon how big a drop in performance you are prepared to accept before discarding it. In addition, the more you play with the ball, the more rapidly it will lose pressure. If you use balls a lot on hard courts, they will probably become unusable due to the felt being worn off before the pressure loss becomes unacceptable.

Considering pressure loss alone, a good quality ball might last for around 6 hours of play for high standard players, or around 2 weeks if used for less than 6 hours during that period.

Can You Pressurize Dead Tennis Balls?

Tennis balls can actually be pressurized after they become dead by using a specially made pressurizing machine. However, these machines can cost a few hundred dollars, and purchasing them might not make sense for players that only play during the weekend.

The first thing to consider here is the surface you play on. If you play on rough hard courts, the felt will wear off your tennis balls very rapidly, and there will be no point in repressurizing them. If, however, you play on softer surfaces and use a large number of balls, perhaps in coaching or with a ball machine, it may be worth investing in a device that can repressurize them once they become too soft.

An example would be reBounce’s Mini Green Tennis Machine, which uses a carbon dioxide cylinder to restore the pressure in the balls. As the machine retails at around $450, however, it is only financially worthwhile if you use large quantities of balls for practice.

Pressurized tennis balls typically offer better performance than non-pressurized options, and they are the only choice for competitive play. Nonetheless, they do not last very long, so if you use large quantities of practice balls, the greener option would be to consider purchasing a machine to repressurize them when they go soft, reducing waste.

link to Why Do Tennis Balls Have Numbers On Them?

Next time you open a tube of tennis balls, have a close look at what is printed on those gleaming fluorescent spheres. There will be the manufacturer's name, the model of the ball, possibly a logo,...

Different people have very distinct ideas on how long tennis balls remain useable. For a professional, it is unthinkable that they should be asked to use a set of balls for more than nine games....