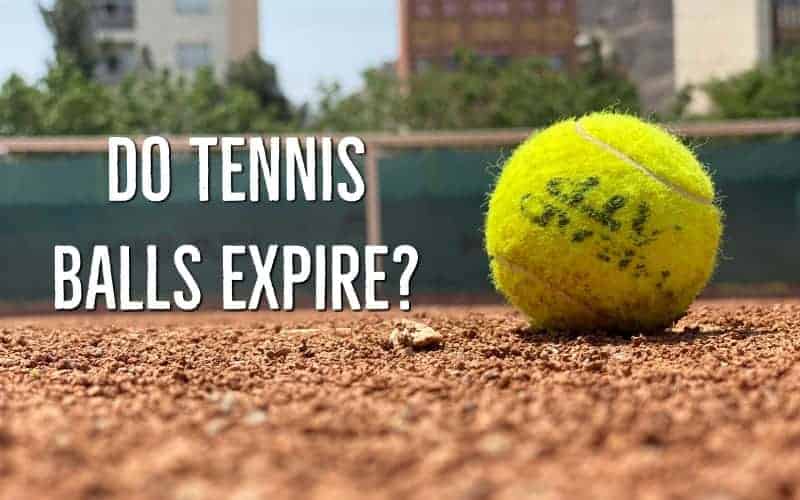 Different people have very distinct ideas on how long tennis balls remain useable. For a professional, it is unthinkable that they should be asked to use a set of balls for more than nine games. Casual players, on the other hand, might keep the same balls for months, simply adapting to their increasing softness and worn surface. So how long do tennis balls really last?

Tennis balls will go bad after about 2 weeks or 3-4 playing sessions. Unopened tennis balls are kept in a pressurized tube to help them retain bounciness and firmness, but even those will expire after two years (due to very tiny leaks).

At that point, players should begin using new balls in order to enhance the playing experience. If you’re interested in purchasing the best tennis balls for your game, we have written a great guide on How To Choose Tennis Balls. Did you know you should buy different balls depending on where you live?

Anyways, let’s look at why tennis balls expire and what you can do.

Tennis balls consist of a rubber core, covered in felt, filled with pressurized air. The air pressure inside is roughly double that in the atmosphere. They bounce because, when they hit the ground or a racquet, they are squashed, and the pressurized air inside pushes against the rubber core, making it stiffer.

The higher the pressure inside the ball, the higher the bounce will be, or the faster the ball will come off the racquet face. When the balls are struck, or even stored, tiny amounts of air leak out, meaning that they eventually begin to feel soft.

New ones are kept in a tube that is filled with air at the same pressure as that inside the balls, which prevents pressure from being lost from the balls, and causes that satisfying hiss when you open the container.

Unfortunately, after a couple of years, enough air is likely to have leaked out of the tube, and, hence, the balls, to cause them to go soft, so even if unopened they will expire eventually.

How Long Are Tennis Balls Good For?

Once you have opened your fresh new tube, you will be hoping that the contents will last for several sessions- but will they? The rules of tennis require that, for a ball to be used in a match, if you drop it from a height of 100 inches onto a concrete slab it must rebound to somewhere between 53 and 58 inches. A new ball will do this, but as the air gradually leaks out, the bounce will get lower and it will feel softer and heavier on your racquet.

It will typically take a couple of weeks for a ball to get soft enough that most regular players would not want to use it. Another consideration is the wear and tear which the outer felt layer experiences if you play on hard courts. A couple of sessions on concrete or tarmac will shred the covering of most balls. Overall it depends on how picky you are, but most people would expect a new tube of balls to last for about two weeks, or three sessions.

Why Do Tennis Balls Go Bad?

The main reason is the way air leaks out of the balls over time. Although the rubber core is chosen to have a low ‘permeability’ to gas molecules (i.e. it doesn’t let too many through), it cannot keep them all inside. Eventually, enough will leak out that the pressure reduces significantly and the balls feel softer.

What Can You Do With Old Tennis Balls?

There are some companies which will buy old tennis balls from you and recycle them, but there are plenty of other ways you can make good use of them.

Tennis balls do last quite a long time when they are sealed in their original tube, but not forever. Once you open them, they have quite a limited lifespan. There are commercial products available that will store the balls at the same air pressure as in their original tube, and which can minimize the softening of the balls, but even then there will be some loss of pressure when they are played with.

Also, if you play on hard courts, the outer surface will be shredded after two to three hours whatever you do. Perhaps the best solution is to simply buy new balls in bulk at a good price, and then recycle or re-use the balls in one of the many ways listed above. They have far more uses than many people imagine!