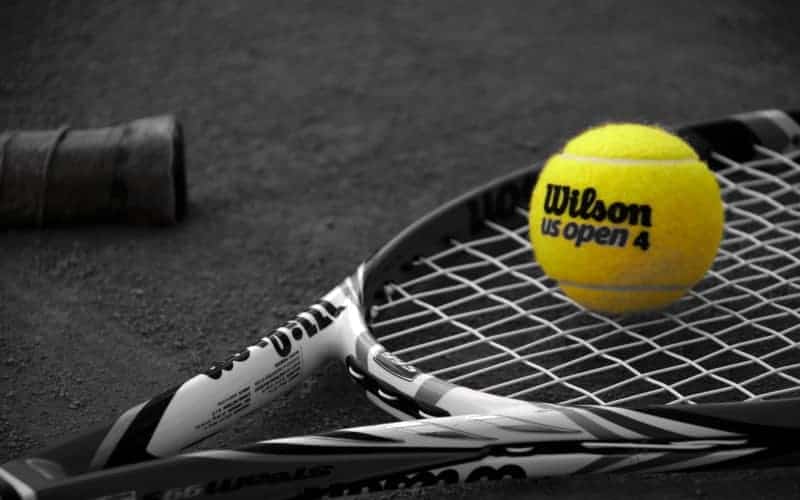 Next time you open a tube of tennis balls, have a close look at what is printed on those gleaming fluorescent spheres. There will be the manufacturer’s name, the model of the ball, possibly a logo, and a number between one and four. The reason for the presence of the first three features is clear, but the purpose of the number is less obvious. Each ball in a given tube will be printed with the same number, so it is not to distinguish the balls within the set.

Some players believe that the number reflects the bounciness of the balls, but they are confused. It is true that the International Tennis Federation (ITF) require tennis balls to conform with one of three sets of specifications. Type 1 balls are ‘fast’, type 2 are ‘medium’, and type 3 are ‘slow’. However, while tennis balls are categorized in this way to give people an idea which type they might want to buy, these numbers do not appear on the balls themselves. So what, then, are those numbers for?

Tennis balls have numbers printed on them so players can distinguish their balls from balls coming from another court. Most people play tennis in an area where people are playing on adjacent courts, and it is very possible that more than one court might be using the same brand and type of ball. The numbers allow for a simple and easy distinction.

The Reason Why Tennis Balls Have Numbers

You will have noticed that when professionals play matches, the balls are changed for new ones every few games. The reason for this is the fact that new tennis balls are harder and bouncier than used ones, and the pros like to play with balls of a consistent quality. As soon as a new set of balls is removed from its pressurised tube it begins to get slightly softer, and hitting the balls hard, as the pros do, just accelerates the loss of pressure.

Club players do not hit the ball as hard as professionals, but, nonetheless, their tennis balls get softer with every hour of use. If you are playing with new balls on the next court to some players whose balls have been used before, you will notice the difference in playing characteristics if the balls get mixed up, even if they look similar. If you are using the same brand and type of ball, this can be a real issue, especially if the people on the next court are quite happy to ‘borrow’ your new balls. The numbers on the balls provide an easy solution. If you are using balls printed with number 3, and the next court is using number 4, it is easy to make sure the right ones are returned to you if they should roll onto the adjacent court.

Are Balls Different If They Have A Different Number?

If tennis balls are identical in terms of manufacturer and model, the number on the ball does not indicate any difference at all. It is purely a means of separating one set of balls from another. However, if faced with the scenario in the previous paragraph, where balls of the same type are being used on adjacent courts but one set is older, then the two sets of balls will perform differently. So in this sense the different numbers will indicate a difference in performance.

Do All Brands Print Numbers On Their Tennis Balls?

The addition of a number to the balls is such a simple and obvious thing to do, incurring minimal extra cost and offering a real benefit, that it is now difficult to find balls without numbers. There are, however, certain specific situations where numbers are not useful and where the manufacturer may choose not to include them.

For example, some companies make monogrammed balls, featuring your own name or that of your company. In this case, it is unlikely that another court will be using something similar, so numbers are superfluous. Equally, companies making practice balls recognize that coaches will normally use large batches of balls, and numbering them from 1 to 4 is not helpful. Finally, if balls are made specifically for elite tournaments, they are unlikely to get mixed up, and numbers are not needed.

Other Differences Between Tennis Balls

The main differences between tennis balls are their size and bounciness. While the ITF will not allow large variations if balls are to meet with their approval, slower balls are slightly larger than faster ones and, being a little softer, may not bounce as high.

Balls vary according to the amount of felt on them, which can affect their weight (especially in the wet) and durability. If you play on hard courts, for example, you will probably want a slow, durable ball with plenty of felt, as the surface will wear the covering off the ball quickly.

In general, you will want to try out various types of ball to establish what works best on the type of courts you use, but there will always be a strong element of personal preference.

Tennis balls are generally a bright yellow colour these days, but other colours are available. The felt should be bright and easy to see, but apart from that it is really a matter of personal choice. Tournaments are virtually always played with yellow balls for adults.

For children and novices, colored low-compression balls are used according to the players’ stage of development. Red is the softest, for beginners, then orange, and finally green.

Tennis balls can vary in many ways, but the numbers are simply there to help you to avoid mixing yours up with those from the next court. They are very useful, but manufacturers could consider increasing the range of numbers beyond 1-4 to avoid clashes.