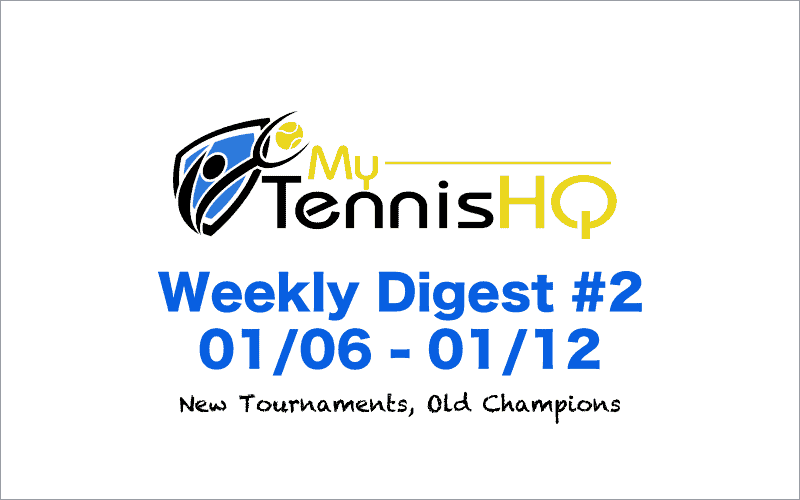 It’s only the 2nd week of the year and tennis fans have already had enough excitement for the year. We have seen the conclusion of the ATP Cup (which, in my opinion, was a success) with Djokovic’s Serbia defeating Nadal’s Spain. Once again, these 2 players have shown how good they are and how they can (and will) defeat other countries basically by themselves.

We’ve seen really exciting moments from NextGen players, which included Daniil Medvedev and Denis Shapovalov almost taking their matches against Novak. Alex de Minaur had a great tournament, showing an unmatched energy level, professionalism, passion, and great tennis. An honorable mention also goes to Hubert Hurcakz, who defeated Diego Schwartzmann, Borna Coric, and Dominic Thiem. By the way, I’ve seen this guy plan and I believe he will be a top 15 player by the end of 2020. Even Nick Kyrgios showed a more mature attitude and professionalism, but that could all change next week.

If we’ve seen glimpses of hope, we’ve also watched some disappointing moments. Tsitsipas, during an angry outburst, hit his dad while smashing a tennis racket. Zverev, besides hitting several double faults during his matches, was seen yelling at his own dad. And Daniil Medvedev (not surprisingly) was fighting with everything and everyone during his match against Schwartzmann. While they are still young (Federer used to break everything when he was young), they’ll need to get their stuff together if they want to stay at the top.

On the women’s side, we saw some great matches in Brisbane. Karolina Pliskova took home the title, leaving behind several of #1 contenders, including Naomi Osaka, Ashleigh Barty, Elina Svitolina, and Petra Kvitova. In Auckland, Serena Williams took home her first title since her daughter was born, which could give her the necessary confidence to win the Australian Open. Finally, in Shenzhen, Ekaterina Alexandrova won her first-ever WTA, showing signs that she could have her best season yet.

The bad news this week came from Bianca Andreescu, who is always one of the most entertaining players to watch. She continued with her history of injuries, and will need to miss the Australian Open due to a knee injury.

Winners Of The Week

Match of The Week

What We’re Looking Forward To

In Auckland, we’ll keep our eyes on some other NextGen players, including Shapovalov, Khachanov, Ruud, and Hurkacz. However, what I’m most excited to see is how Jannik Sinner (the winner of the 2019 NextGen Cup) will start his season. He will play against Benoit Paire in the first round, so it will be a tough test.

On the women’s side, the main focus will be on the Adelaide Premier. Lots of big names playing in there, and we’ll see if Ash Barty will be able to bounce back from her campaign this past week.

What We’re Up To

Karue will be helping Naomi Osaka to prepare for the defense of her Aussie Open title. Gui is working on getting some more content, and we may be adding another team member soon. Stay tuned for some more cool content coming out this week!