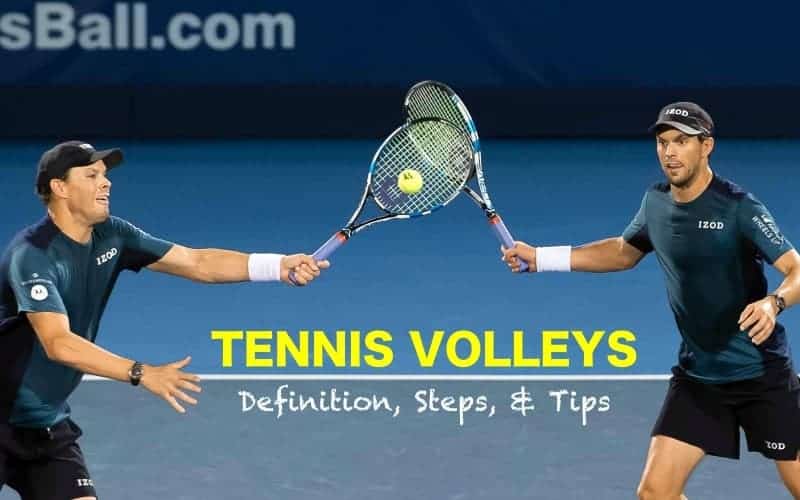 The sport of tennis has gone through some dramatic changes through time. If you watch tennis videos from the 1950s and compare them to recent videos, they will look like very different sports. From clothes to rackets to rules, all the major aspects of tennis have evolved with time. And among all these aspects, one that changed significantly was the need for good tennis volleys.

In the past, the majority of tennis points were played with one of the players (or both) at the net hitting volleys. Because the courts were very fast and the rackets were smaller, good players used to try to get to the net as soon as possible. Needless to say, they needed to have good volleys. As time went on, both courts and tennis balls became slower, rackets became bigger but lighter, and players became stronger and faster. These changes made the overall tennis game slower, which means that players are not rewarded as much for going to the net – since their opponents have more time to react. As a consequence, players began focusing more on their groundstrokes than on their volleys, and nowadays even some of the best tennis players in the world will admit they have a pretty pathetic net game.

Volleys are one of the trickiest shots in tennis. When watching professionals play, volleys seem very easy and automatic. On the other hand, when you’re playing tennis and you suddenly have a tennis ball rushing towards your face, volleys don’t look that easy anymore.

Tennis volleys require touch, speed, skill, fast reflexes, a steady hand, and precision – which makes them one of the most admirable shots in tennis.

While players and coaches tend to not spend as much time working on volleys anymore, having a solid game can give you an edge on the tennis court. Volleys are great not only for singles, but for doubles as well. By having a good net game, you’ll be able to be more aggressive, shorten points, run less, and win more.

Pretty good deal if you ask me.

In this article, we will cover the basics of volleys, including what a volley is and how you can hit one. We’ll also cover some of our best tips and strategies to take your tennis volleys to the next level. Whether you are a beginner or a more experienced player, you will be able to get something out of this read.

If you wish, you can skip to the specific section that interests you. The information below is outlined in the following way:

In essence, volleys are part of your net game, which means that you will hit these shots without letting the ball touch the ground before you hit it. These shots are mainly used to finish the point, after you were able to move your opponent around by hitting successful groundstrokes. They are also used a lot more frequently during doubles matches. Depending on how you hit your volley, it will be qualified as either a forehand volley or a backhand volley.

The forehand volley is a fairly simple movement, in which you use only one arm to hit a ball by your dominant side, without letting the ball touch the ground. A player usually hits volleys when standing close to the net and inside the service box. It requires firm hands and fast reflexes.

The backhand volley looks a lot like a backhand slice, but without letting the ball touch the ground. Once again, a volley usually occurs when you are standing close to the net. A backhand volley always happens on your non-dominant side. While backhand volleys are normally taught as a one-handed shot, it is not uncommon to see players hitting backhand volleys using both hands.

Backhand volleys are an important part of your net game since they will allow you to shorten the points and take time away from your opponent.

When you’re hitting tennis volleys, it all comes down to speed and control – which is why you should hit your volleys using a Continental grip. The benefits of using this grip for your volleys is that it is very quick to set up, and you won’t need to change it between your serve, forehand volley, backhand volley, and overhead. While the Continental grip doesn’t allow the player to add a lot of spin to the shot, that is not a problem since volleys do not require spin.

In order to use a Continental grip, you should hold your racket as if you were “giving it a handshake”. The knuckle of your index finger should be right on bevel #2. The Continental grip is excellent for hitting shots that do not require much topspin, like serves, volleys, slices, and overheads.

While tennis volleys look very simple, there are actually a lot of things going on at the same time. As you become comfortable with this shot, these things will become automatic and you won’t have to really think about them. However, when you’re first learning how to volley, you should understand the biomechanics of a well-executed volley. We’ve broken down the volley into 9 different steps (as you can see in the image below) so you can have a good idea of what you should be doing. You can follow these steps for both forehand and backhand volleys.

Remember, though, that once you become comfortable with volleying, your stroke should be one smooth movement and not a series of small movements.

A player’s volleys are only as good as his footwork. Since volleys happen so quickly and there is not much room to compensate with a full swing, having efficient footwork is paramount. Just like a lot of other things in tennis, simpler volleys are better volleys. Below we’ll cover a few tips to have a good volley footwork.

When you’re hitting volleys, there are essentially two positions your body should go through. They are the neutral position and the step-through position.

This is the stance you’ll usually use before doing your split step. Your feet will be spread at about shoulders’ width, your knees will be slightly bent, your body weight in the front of your feet, both hands on the racket, and your torso standing up straight.

In defensive volleys, this is the only position you will use. Since the ball is coming at you faster, you don’t have time to step through with the back leg. So in order to hit successful defensive volleys, your neutral position should have a solid base.

This is the final position you will use after hitting an aggressive volley. This is the position you’ll end up on after making contact with the ball and stepping your leg through. From that point on, you will need to level both legs and recover fast for the next volley.

Once again, when shots are coming at you too fast and you have no time for the step-through, you should stick to the neutral position mentioned above.

The backswing portion of the volley is a tricky one. A lot of times, if our opponent hits a slower shot, we’ll have more time to prepare and we’ll end up using a big backswing so we can “hit the ball harder”. By doing so, a lot of times we end up missing those shots – either long, wide, or at the net.

A volley backswing should always be as compact as it can possibly be. If you are wondering whether your backswing is too big, chances are it probably is.

I’ve worked on my volley technique a lot throughout my career, and I’ll share some of the tips that have helped me out the most over the years.

If you’ve made it to this point, you basically know everything you need to know in order to hit effective tennis volleys. Now all you need to do is go to the court and practice.

Below we have added some additional tips that might make your journey easier:

We are constantly adding new drill ideas for every area of your tennis game, volleys included. We have previously written an article on the 7 Drills To Improve Your Volleys, which has some of our favorite volley drills. Below, we’ve listed some of our favorite drills that will help you improve different aspects of your volleys, including direction, consistency, reflexes, and footwork.

This drill will have you working with a partner in order to improve your volley direction. It might be a little challenging at first, but once you get a feel for it, you should be able to get a nice flow going. This drill will help you not only improve direction, but consistency and reflexes as well.

What we love about this drill is that it removes every distraction possible. When it’s just you and the wall, you can reach a focus level that is not possible when hitting with a tennis partner. The cool thing about it as well is that the more your volley technique improves and the more consistent you are, the easier the drill becomes.

For Volley Reflexes – The On Top Of The Net Drill

This is a great quick drill that can be extremely helpful, especially for doubles. You may get hit once or twice, but you will most certainly develop better reflexes.

For Volley Footwork – The Get Low, Stay Low Drill

Finally, this drill is one of our favorites when it comes down to improving volley footwork. What makes it great is that it forces you to work on your legs while keeping the right technique. Trust me, you will get tired when doing this drill. But hey, the more tired you get now, the less tired you will be during the matches.

We hope you enjoyed this read and that you can go ahead and begin working on improving your volleys. If you do have any questions, comments, or concerns, let us know in the comments section below and we’ll get back to you as soon as we possibly can!