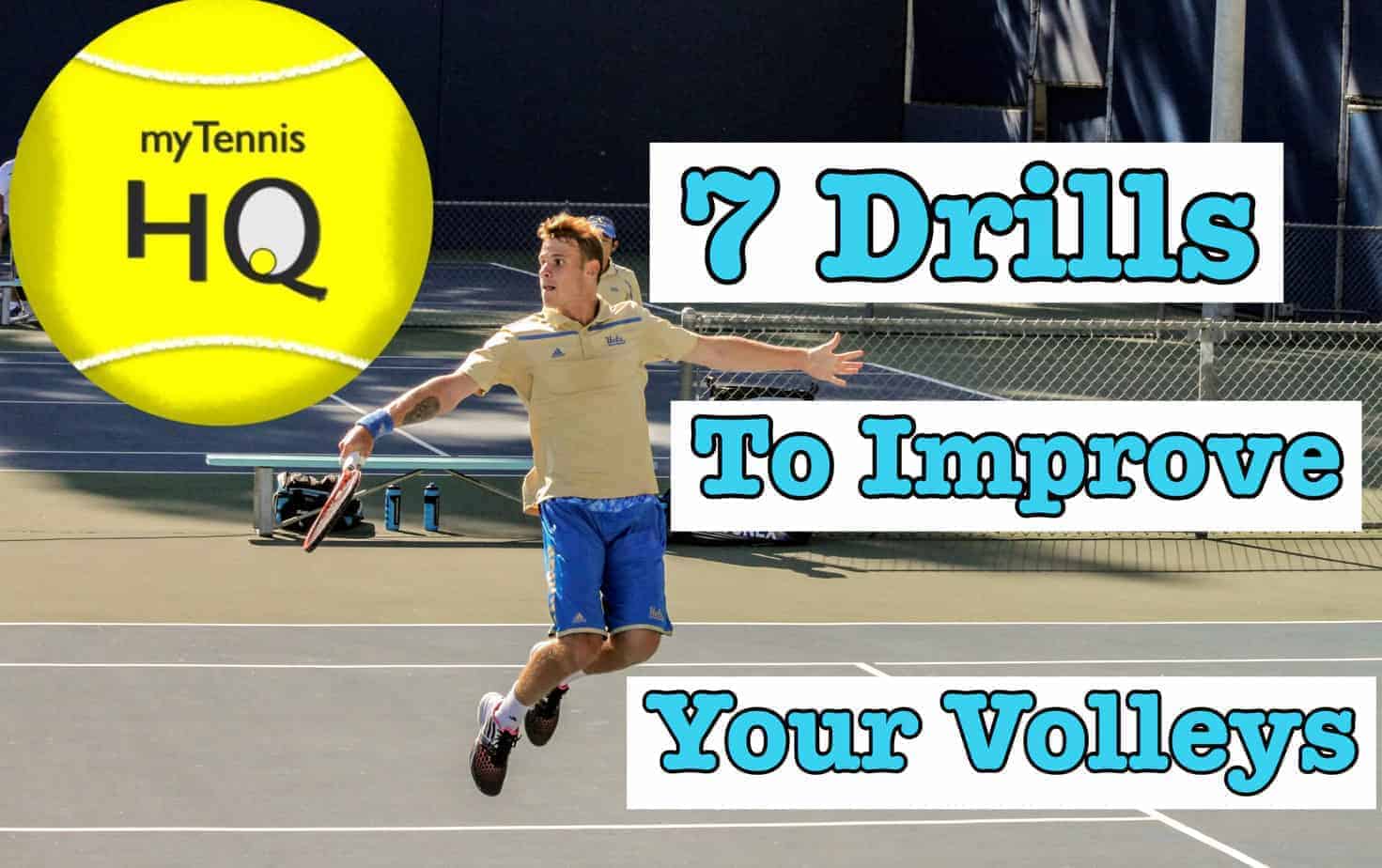 The volley is the most simple shot on the tennis court, so why do so many players have issues when they come forward? Missing an easy volley after setting up the point so perfectly will leave you pulling your hair out. How do you fix it?

Improving your volleys takes a lot of repetition, but it is crucial to train the right way. Just rallying up the middle with a partner while you stand at the net is boring and unrealistic. You need to practice your volleys with purpose every time you step on the court.

As a player, I wasn’t blessed with the most natural hands at the net. However, I attribute my successful transition game to these 7 drills that will make your volleys rock solid.

When trying to improve parts of your game, it only makes sense to copy the best. The Bryan Brothers are undoubtedly the best doubles team of all time, so why not borrow some of the drills that made them so good? I had the privilege of training with Bob and Mike a couple of years during the two week Masters 1000 tournament at Indian Wells.  Being on court with them made me realize how years of sharpening their volleys got them to where they are.

One of the drills that they were doing every day during that tournament is referred to as “The Bryan Brothers Drill” most likely because they use it so much. This drill is useful because it includes several key aspects of the volley: lively feet, quick reaction, and sharp precision.

It starts with both players in the middle of their respective service lines. As they begin to hitting volley to volley, both players move to their own left or right side as they rally. The players will be hitting crosscourt as they are moving opposite directions, or away from each other. When they reach the alley, they both come back to the center and continue on to the other side, trying to keep the ball in play as long as they can. If you miss, just feed another ball in quickly and keep going. This drill is pretty physical especially on the forearms, hands, and wrists. Below is a video of Karue Sell and I demonstrating the drill. We slowed down our footwork and ball pace to show a starting point for the drill. As you become more comfortable with practice, you can speed it up.

The first drill you can do against the wall is simple repetition on each side. Start with 100 forehand volleys without a break, followed by 100 backhand volleys. They don’t have to be in a row, if you miss just keep going. The closer you get to the wall, the more challenging it will be.

As you master this drill, you can move on to moving the ball up and down the wall. This is not easy, but it is a good challenge for you to work towards.

The next drill that you can do on the wall is changing between forehands and backhands. You can do this switching sides every other ball or every two balls. You will want to take a couple of steps back from the wall for this one so that you have time to switch. Be sure to have a pocket full of balls so that if you miss you can start over right away.

This drill will help you improve your ability to close the net and your hand quickness. The offensive player in the drill will start a foot or two behind the service line, while the defensive player will start a foot or two inside the service line. The defensive partner feeds the ball as the offensive partner comes forward, closing the net until he can’t anymore. You should be able to hit 4-6 balls each before the player that is closing reaches the net. After you are content with how the drill has gone, switch roles and do it again.

To make things more interesting, make it a game. Play on half the court with no alleys so that there is no room to go around each other. Play to 7 and add the scores between the two games.

On Top of the Net Drill

This drill is one of my favorites because of how challenging it is. Even the best doubles players can benefit from making their hands just a little faster, and this one will help you do that.

For the “On Top of the Net Drill,” one player will be on the baseline while the other is only inches from the net. The goal of this is NOT to have long rallies and find rhythm. You really shouldn’t expect to make more than 3 or 4 balls in a row, or else you are not doing the drill correctly.

The crosscourt first volley drill is a great way to improve your doubles transition game. The first volley is the most important volley in both singles and doubles, but most players don’t work on it nearly enough.

For this drill, both players start on the deuce side of the court. One player will start on the baseline, while the transitioner will start in “no man’s land.” The baseliner feeds the ball to the transitioner and they play the point out crosscourt, alleys are in. After the feed, anything goes, including lobs and drop volleys. The baseliner should be sure to mix up feeds so that the drill doesn’t become repetitive and predictable. Feed some slow ones, some fast, some dipping at the feet, etc. This is a 4 part game, as both players will play a game to 7 as the transitioner and the baseliner on both the deuce side and the ad side.

“The Floor is Lava”

The “floor is lava” drill is one of the more physical volley drills that you can do. It will improve your ability to get up and back quickly. Being able to cover the lob is essential because it gives you more confidence to close the net harder.

For this drill, one player will start a couple feet inside the service line while the other is on the baseline. The objective is pretty simple: the volleyer isn’t allowed to let the ball hit the ground on their side of the court. The baseliner should try to get the ball to hit the ground by mixing in lobs and dropshots when appropriate. The goal of the drill is to get the volleyer to work, so make sure as the baseliner you are pushing the volleyer to their limit without making it too challenging.

*** Make this a game by either playing on half the court with no alleys and play to 7. Alternatively, you can play this game 2 on 1. There will be 2 baseliners and one at net, alleys are out. The baseliners can only hit winners by lob or dropshot, but not winners around the net-man. Rotate so that each player has a chance as the volleyer.

If you have a hard time staying low on your volleys, this is the drill for you. The “Get Low, Stay Low” volley drill is simple. One player will be at the net volleying while the other will be at the baseline hitting groundstrokes. The volleyer is required to touch the ground between each of his volleys. The goal is to see how many volleys you can hit in a row without losing the quality of the shots.

This drill is not only good for working on staying low, but it also helps you improve your reaction time. When you go back to hitting volleys normal without touching the ground in between, you will feel like you have all the time in the world.

Volleying is simple, but it requires work to become a master of it. Fine tuning your volleys is important because it is the most effective way to end points. Players without good volleys are at a huge disadvantage in finishing points for both singles and doubles.

Using these 7 drills have improved my volleys, and I have confidence that they will help yours as well, no matter what level you play at. Set aside a bit of time daily to train your volleys with these drills and you will be sticking them with authority in no time.