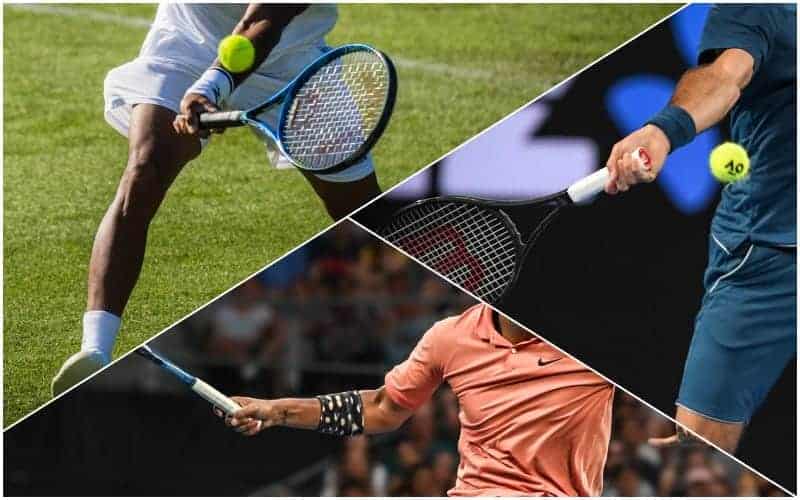 When you start playing tennis, you are most likely to take a racket and hold it anyway it feels comfortable to play the ball over the net. If you never take any tennis lessons, you might never know that there are actually multiple different ways for you to grip a racket and that this has an impact on your shots.

There are essentially three different types of grips – the continental, the eastern, and the western. But what is the difference and which tennis player should use which grip?

To know the basic things about the different grip types, you must look at the grip of a racket. It is shaped like an octagon and is divided into eight bevels. The way you position your hand on these eight bevels will result in the so-called grip you are using.

To help make identifying the grip easier, we can label each bevel with a number 1 starting at the top and moving clockwise all the way around.

To form the continental grip as a right-handed player, you’ll place the pad of your index finger’s bottom-most knuckle against the second bevel and wrap your fingers around the handle.

To form the continental grip as a left-handed player, you’ll place the pad of your index or pointer finger’s bottom-most knuckle against the eighth bevel and wrap your fingers around the handle.

With the continental grip, the tennis racquet angle is neutral, which means the racquet frame when you hold it in front of you is perpendicular to the ground.

The continental grip was once the universal grip used to hit forehands, backhands, specialty shots, volleys, and the serve. It originated on the soft, low bouncing clay courts of Europe, and although it has been superseded in today’s game, it serves as the foundation grip for the volley, serve, and overhead for most players.

As tennis has evolved, the continental forehand grip has become the least favorite grip. It requires an exceptionally strong forearm and impeccable timing. On the backhand side, the grip is used less often today to hit the power backhand.

Though effective for producing a slice backhand, the continental grip does not provide the strength or stability in the racquet head to handle powerful groundstrokes from an opponent.

However, the continental grip offers the most support for the wrist and doesn’t require a grip change when playing volleys. It is ideal for volleys because the neutral racquet face created by the grip is perfect for blocking the ball back.

Nowadays, no professional tennis player uses the continental grip for their groundstrokes, only when hitting slices, volleys, serves, and overheads.

To form the eastern grip, simply place the palm side of your index finger’s knuckle against the third bevel of the tennis racquet if you’re right-handed. If you’re left-handed, place it against the seventh bevel and then firmly wrap your fingers around the handle.

One of the advantages of an eastern grip is its proximity to the continental grip, which is great as it allows players to transition from a forehand to volleys and vice versa quickly.

This is especially useful when a player transitions from the baseline to the net after hitting an approach shot. Because of how easy it is to change grips, the player is quickly ready for the follow-up volley.

Roger Federer, for example, has one of the best forehands in the game and uses an Eastern forehand grip. Other professionals that mainly use the eastern grip are Juan Martin Del Potro and Stefanos Tsitsipas.

To form a semi-western grip, place the index knuckle and heel pad on bevel 4. The shortcut to finding this grip is to put the racket face flat on the ground and pick it up.

The primary benefit of the semi-western grip is a player’s ability to generate topspin. With a semi-western grip, the angle of the racquet face is closed or pointing toward the ground. As a result, when you swing and encounter the ball, you can easily brush up and over the top of a tennis ball to produce topspin.

Players using a semi-western grip can hit the ball higher over the net and ensure the ball drops back into the court due to the topspin generated. Ultimately, this allows players to hit much more aggressively and with a higher margin for error.

The disadvantages of this grip are that it can be challenging to transit quickly from a forehand to a volley – which can, however, be overcome with practice.

In addition, it also can be challenging for players to hit an extremely low ball that’s only a few inches from the ground, because the semi-western grip forces a player to hit under and over the ball to generate topspin.

Professionals that use this grip are Rafael Nadal, Andy Murray, and Novak Djokovic.

To find the Western grip, you should place the palm side of your index finger’s knuckle against the fifth bevel of the racquet handle. The western grip is great for a heavy baseline game with big groundstrokes that have a ton of topspin.

It is without a doubt the main benefit of this grip but just like with the semi-western grip, it’s not easy to switch to a continental grip for slice shots or volleys. It requires a player to rotate the racquet quite a bit.

Professionals that use this grip are Nick Kyrgios, Karen Kachanov, and Jack Sock.

How To Choose The Right Grip For Your Game

The tennis grips you use have a significant influence on your style of play. This is because the tennis grip is one factor that determines how much spin you put and how much pace you generate.

One grip is not better than another, and you should select a grip that helps your style of play.

Just like with the type of racket you use or your playing style, choosing a grip should depend on what matches your game and abilities. In the end, it comes down to personal preference and the success you are having with it.

Even though each grip has its strengths and weaknesses, like previously stated, there is no right or wrong or better or worse grip. It all depends on the situation and the type of player you are.

If you are just starting to work on your tennis game, hitting some shots will seem incredibly complex while hitting others will seem to come naturally. Most beginners find that the forehand is a shot...