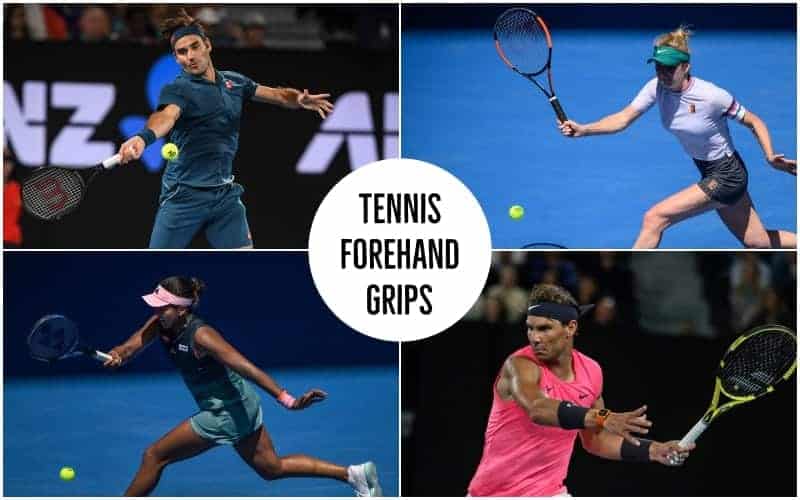 For many players, their forehand is their favorite shot. It is the one they try to hit as much as possible, and the one they employ when they are aiming to strike a winner. Fans of the game love to watch the smooth, powerful forehand of Federer or the brutally topspun stroke of Nadal. Considering those two legends emphasizes the fact that there are many different ways to hit a forehand well, and many of these require you to hold the racket grip at a different angle.

It is vital to adopt a grip that is appropriate for the way you want to hit the ball, and, with the emphasis on the spin in today’s game, more players than ever are using what might be described as an ‘extreme’ grip. So what kind of grip is best for your way of playing?

The range of forehand grips runs from the continental, via the eastern and the semi-western, to the full western. The continental is for hitting flat shots, whereas the western is for the heaviest spin. If you are a beginner, you will probably start with an eastern or semi-western grip, and many players will continue with one of these.

We will cover everything you need to know in order to choose the right grip for your game. If you are interested in learning more about other aspects of a good tennis forehand (like footwork, backswing, follow-through) you can check out our awesome Tennis Forehand Step By Step Guide.

How Do You Hold A Forehand Grip In Tennis?

The handle of a tennis racket has eight sides, and a grip is most easily described by how these ‘bevels’, as they are known, sit in your hand. The diagrams below shows the bevels, along with numbers to make them easier to describe.

You will notice that the bevels are numbered differently for left and right-handers, as they strike the ball with opposite sides of the racket. In general, a player will hold the racket moderately firmly in their dominant hand, with the thumb and index finger making a ‘V’. The index finger will sit in a kind of ‘trigger’ position, with the rest of the fingers remaining close together as they wrap around the handle.

The key difference between the various types of grip is how the knuckle below your index finger and the heel of the hand (on the opposite side to the thumb at the base of your hand) are positioned. Due to the angle at which your hand holds the racket, these two areas will sit on the same bevel. The position of the bevel on which they rest determines whether the racket is in a good position for flat hitting or extreme topspin.

In the days of wooden rackets and serve-volley tennis, this grip was common. In the above diagram, the index knuckle and heel of the hand sit on bevel 2 for a continental grip. Today, virtually nobody uses this grip to hit a forehand, as it makes it very difficult to hit topspin. Nonetheless, the grip is excellent for hitting serves and volleys, so it is still commonly used for those.

Move your hand around the handle so that your heel and index knuckle are on bevel 3 and you will be demonstrating an eastern forehand grip. This was used by the legendary Pete Sampras, and Roger Federer also employs something similar, although he may actually be part way between bevels 3 and 4.

The person who made this grip fashionable in the late 1970s was multiple grand slam champion, Bjorn Borg. Borg was the first player to demonstrate that, even with wooden rackets, it was possible to win matches from the baseline by hitting consistent heavy topspin. His forehand incorporated a steep, upward racket path that enabled him to produce this spin.

A small number of players still use an eastern grip today, but they are primarily those who like to hit the ball hard and flat, with a modest amount of topspin.

The grip has advantages for more attacking players because it lends itself to aggressive groundstrokes, and it is quick and easy to change to a continental grip if the player moves forward to volley. Its disadvantage is that it is more difficult than some others to use for higher balls, and it does not lend itself to control.

This is the grip which is most commonly taught to juniors at present. The index knuckle and heel will be on bevel 4, although young players are sometimes taught, instead of worrying about bevels, to lay the racket on the floor and then pick it up to help them find the correct grip.

Many people consider the semi-western to be the ideal grip for the way tennis is played today, and it is used by numerous professionals including Serena Williams and Novak Djokovic. The racket angle that this grip produces allows considerable topspin to be put on the ball, as well as lending itself to powerful shots. It works well for medium and high balls and is most effective if the ball is contacted in front of you.

On the downside, a significant adjustment is required to change to the continental grip for volleying, which is not helpful to players who like to move to the net, and the grip does not make it easy to play very low balls.

For a western grip, the index knuckle and heel will be on or near bevel 5. This means that the racket is being held at almost 180 degrees to the position it is in when the continental grip is used. This grip lends itself to extreme topspin and is best when the ball is bouncing high. It is often favored by players who developed their game on clay courts.

Karen Khachanov and Kyle Edmund are examples of leading players who favor this grip, and Rafael Nadal also uses something similar. The advantage of a western grip is the ease with which it can be used to generate heavy spin, but it is not as easy to switch to other grips quickly due to the extreme position in which the racket is being held.

It is considerably more difficult to deal with the low-bouncing balls that might be encountered on quicker courts using this type of grip. Young players are often discouraged from using a western grip, as it is believed that it increases the risk of arm and shoulder injuries in juniors.

The Best Forehand Grip For Beginners

Beginners will not be taught the continental grip, because it is not used for forehands in the modern game, and the western grip is too difficult for beginners. Coaches might teach very young children an eastern grip to make it easy for them to hit flat shots, and then encourage them to shift to a semi-western position as they become more adept. For an adult beginner, the semi-western might be taught from the outset.

Grips For Topspin vs Flat Shots

Semi-western and western grips make it much easier to accelerate the racket across the ball and still strike it cleanly, so either of these is best for generating topspin. Topspin can be produced using an eastern grip, as Borg demonstrated, but it is easier to generate the necessary racket-head speed using a more extreme grip. For flat shots, an eastern grip is the best option. It is in fact extremely difficult to hit shots without spin if your grip is close to the western position.

There is an ongoing debate about how tightly you should grip the racket. Some coaches teach that the racket should be held fairly tightly, at least until you hit the ball, whereas others favor a relatively relaxed grip.

The advantage of a tight grip is that it keeps the racket under control, enhances consistency, and reduces errors. The disadvantages are a probable reduction in racket-head speed, and an increased risk of tennis elbow, caused by the tense muscles putting a strain on the tendons in your arm.

Once players have understood and practiced the racket path they aim to use, many coaches will teach them to relax while hitting the ball, and this will encourage them to have a fairly loose grip, although it still needs to be tight enough to prevent the racket from moving in their hand.

The advantages of this are the ability to produce greater speed and the reduced risk of injury. On the downside, more errors may result, and there is a small danger of inadvertently releasing the racket, but overall a relaxed grip is generally a good idea for everyone except beginners.

The forehand grip has evolved a lot over the last 50 years. Most players now use grips which are designed to help them apply a combination of power and extreme spin from the back of the court, and less thought is given to what will be beneficial if they approach the net. Over the next 50 years fashions will no doubt continue to change, perhaps to even more extreme grips, or perhaps back towards the eastern and continental. Only time will tell.