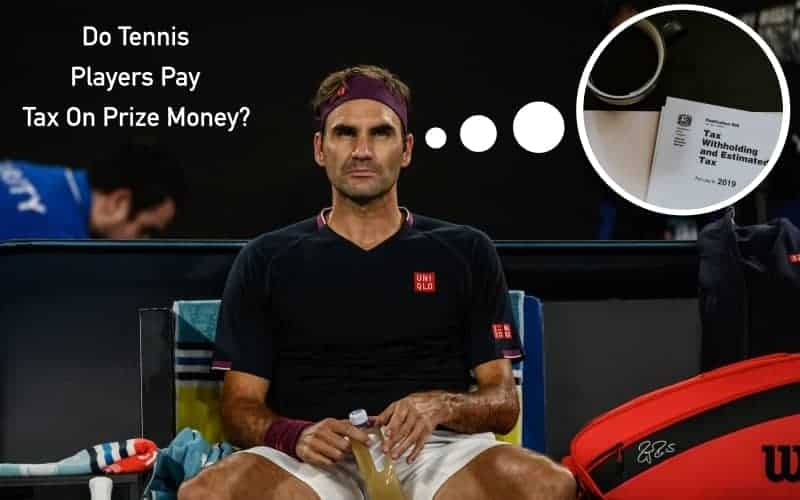 If you have ever heard how much money the top tennis players in the world make, you already probably wish you were a professional tennis player. If you haven’t, I highly suggest you check out our article on 6 Ways How Tennis Players Get Paid (And How Much). Just a hint – it’s a LOT. But even though they get paid a lot, how much do they get to actually keep? How much do they have at the end of the month to pay the bills for their yachts or mansions?

Most of us who are employed have to pay our taxes (or at least you should), and the amount we need to pay depends on which country, state, and city we live in. It’s pretty straight forward. However, things are a little more complicated for tennis players, since their “workplace” is all over the globe. One week they are making money in China, the next in Chile. When you’re traveling all around, it can be hard to understand how taxation works.

So how does income tax work on tennis players’ prize money? The amount of tax money a tennis player will pay on prize money will depend exclusively on the location the money was earned, made, or received. After a player competes in Wimbledon, for instance, he or she is taxed according to U.K. taxation laws – regardless of where that player is from. If that same player competes in the French Open, he or she will be taxed according to French taxation laws, and so on. After the players pay taxes to the local government where the prize money was earned, they do not have to pay income tax on it again when they return back home.

Even though taxes can be quite complicated for tennis players, the sentence above sums it up pretty well. However, there are a lot more details that they need to pay attention to – and we’ll cover all of them below.

How Does Prize Money Get Taxed?

Prize money made from tournaments is, however, the one source of money in which players are actually “working” for it. Their performance will dictate how much they will be compensated for, and this qualifies this source of income as taxable income. What this means is that… well, that it’s income that will be taxed.

Each country has different income tax laws, with some of them having low to no income taxes (Monaco, Dubai, Switzerland), while others will keep almost half of all your income (Belgium, Germany, Austria). Prize money from a tournament (income tax) is taxed according to the laws of the country the tournament is played in. So a player competing in the ATP at Monte Carlo, Monaco will get to keep a much larger share of income than a player competing in Berlin, Germany.

In the majority of cases, income received from sponsorship agreements (which is usually how players make most of their money) is treated differently than prize money income. Endorsement deals are usually taxed according to where the player lives, and this is why so many players choose to live in Monte Carlo or Dubai.

The interesting aspect of prize money taxation is that, in the vast majority of cases, the player needs to pay whatever the country hosting the tournament demands – regardless of where the player is from. After all, once the player enters a new country in order to play a tournament he or she is automatically accepting to abide by that country’s rules.

How Much Do Players Keep?

The amount of prize money tennis players get to keep depends on where the tournament is being played and on how much the pre-tax prize money is. A lot of countries have progressive tax laws, which means that the greater your income, the higher the percentage you have to pay in income taxes. We estimate that players keep anywhere between 55 and 100% of their prize money, with the average amount ranging between 60 – 80%.

As you will see in the table below, tax rates differ greatly depending on the location of the tournament. We’re not tax experts by any means, but we tried to gather tax rate estimates for the main tournaments in the world.

While prize money is taxed according to the location of the tournament being played, income from endorsement deals is usually taxed according to where the player resides. Since the majority of money made by professional tennis players comes from endorsements, they usually choose to live in places that have low income taxes. Obviously these places must have good conditions and infrastructures for practicing, as the players must spend most of their off-time living in the country they choose.

There are a few places that are chosen frequently by players, and they are commonly referred to as “tax havens” – since they have low income tax rates. Some of the most common tax havens are:

You would be surprised by which players live in each one of those countries. I’ll tell you now – it’s not really who you expect. If you’re interested in learning more about why these places are considered great tax havens and which players live where, you can check out one of our top articles here.