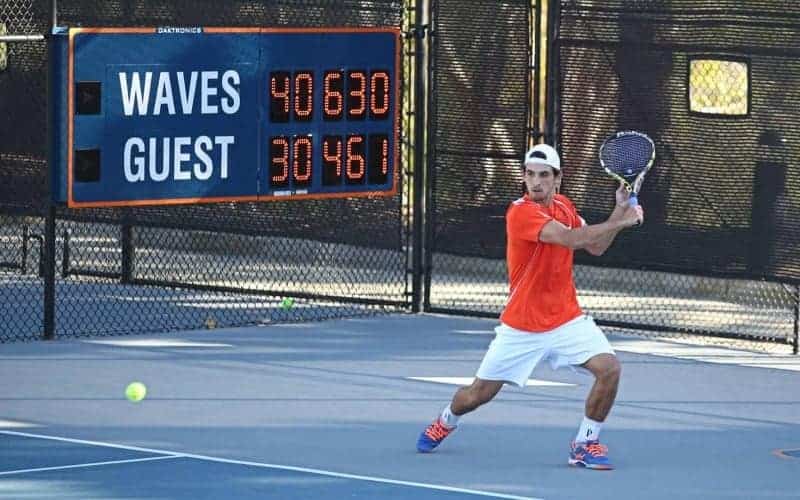 Beginner tennis players often have a hard time understanding the rules of the game. Granted, tennis has one of the most interesting (yet confusing) set of rules of all sports. This is especially true when it comes to the tennis scoring system, which follows a very interesting progression – 0, 15, 30, and 40.

Two theories aim to explain why tennis is scored 15, 30, 40. The first one credits tennis’ scoring system to a sport called jeu de paume, in which players would advance 15, 15, and 10 feet after the first 3 points won. The second theory credits the fact that clocks were used to keep track of the score, and each point advanced the minute hand to 15, 30, and 40 – until a game was finally won.

Both of these theories go back to the time tennis was invented, the late 1800s in France. Both of them seem to make sense, and yet only one of them must be right. We’ll dig in deeper into both, so you can make up your mind as to which one is the right theory.

The first theory explaining the origin of why tennis is scored 15, 30, and 40 claims that these numbers come from the antecessor of tennis, a game called jeu de paume.

This game originated in France in the 1800s, and it is played indoors. Originally, players used their bare hands to hit the ball over the net and into the opponents’ court. As time went on, players started wearing gloves, then some sort of bat, and eventually began using rackets.

While jeu de paume is not a popular sport nowadays, it was certainly popular a century ago. Most people believe the rules of this game were the rules upon which modern tennis was built – and this is why tennis is scored the way it is.

Advocates of this theory claim that, at some point, jeu de paume was playing in courts that measured 90 feet in length – which means that each side measured 45 feet. A player would start the game behind the line, and the rules would allow the player to move 15 feet closer to the net if he or she won a point. After the second point, he would move another 15 feet. And finally, after the 3rd point, he would move another 10 feet, which would leave him 5 feet away from the net – a big advantage (apparently).

Below you can watch what a real match of jeu de paume looks like.

The second explanation behind tennis’ strange scoring system is that players used to use a clock to keep track of the score. Instead of counting the points as 1, 2, and 3, counting them as 15, 30, and 40 was a better fit for how clocks are structured.

This theory explains that originally the scoring was actually counted as 15, 30, and 45 – which meant that after every point the clock’s minute head would advance one quarter. After the 4th point was won, the minute head would reach 60 – which would cause the hour head to advance to the number 1 (equivalent to 1 game).

However, since in tennis a player needs to win a game by a margin of 2 points, players realized that if they counted the third point as 45, the next point would reach 60 and there would be no way of “bringing the score back”, as a game would already have been scored. For that reason, 40 was chosen as the official score. This way, once players tied at 40×40, the player who won the next point would have a score of 50 (also known as Ad or Advantage), and the next point would finally win the game (60). If the player’s opponent won the point, however, the score could be easily brought back to 40×40.

This theory would also explain why a set is played up to 6 games. Once the clock got to its halfway point (6), another set could start, with the first person to finish a full circle around the clock (hitting 12) would win the match.

Which Theory Explains It Better?

As I think about it, the second theory makes more sense. With a lack of better technologies to keep score, a clock would have done a pretty good job. If you think about it, in order to win most matches a player needs to win 12 games. And in order to win a game, he needs to win 4 points. If you translate each point into a quarter-hour, that means that winning one match (48 points) would equal a perfect circle around the clock (48 x ¼ hour = 12 hours).

What Does Love Mean In Tennis?

In tennis, love is used as a term for a score of zero. Instead of counting the score as “fifteen-zero”, the norm is to count it as “fifteen-love”. The origin of the term love is uncertain, but it is one of the oldest traditions in tennis.

There are two theories as to why this term is used: the first one is rooted in the term “to play for love” – a reference to the tradition and sportsmanship of tennis. The second theory proposes that love is used because it sounds the same as l’euf, the French word for egg (and eggs look like zeros).

If you’re interested in learning more about when and how to use the term love when you’re playing, we have written a quick guide that you can check in here – What Does Love Mean In Tennis?

We understand that tennis rules can be quite complex, especially if you are just starting out. With that in mind, we have written a full Beginner’s Guide for Tennis Rules, which covers everything you need to know in order to play the sport. In case you’re more of a visual learner, we have included a very thorough video that lays it all out in a very simple way – and you can check it all out in here.