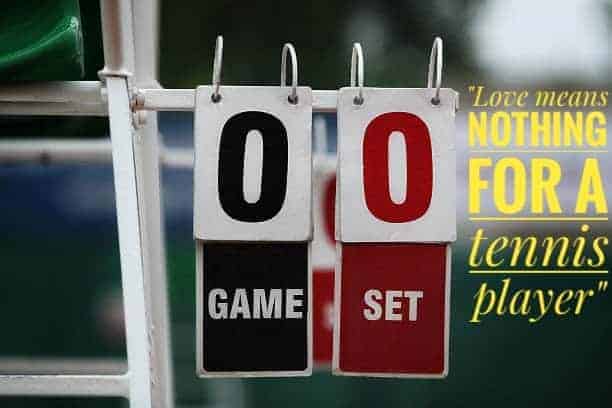 If you are a beginner in tennis, the first thing you need to learn in order to enjoy a tennis match is the scoring system. Don’t worry, we have you covered, you can check out our ultimate guide to tennis scoring here. As you watch tennis matches, you will notice something peculiar; the common use of the word “love” in the scoring system.

Tennis scoring is structured as:

The accumulation of points will turn into games, and games will turn into sets. Players start the match with zero points and games. At the beginning of each game, both players have a score of zero, or “love.” Here is a quick recap of the point structure within a game:

To win a game, a player must win 4 points. However, if both players win three points they will continue to play the same game until someone wins two points in a row. Here is a quick example of a game situation:

When To Use Love

While love’s definition is fairly simple, it can still be a bit puzzling for novice tennis players to know when to use it. There are only a few scenarios where love is used, so let’s take a look:

You are the server:

You lose one point: love-15

The server’s score always comes first. Typically the server is the one who calls the score before each point, but if your opponent isn’t doing it and you want to call out the score, you will still call their score first. So if you win the first point of the game as a returner, the score is “love-15.”

The term love is strictly used to express the score of zero within a game. However, when calling the score in games, it is perfectly acceptable to us the term “love” and “zero” interchangeably. That is up to the individual’s preference. So, a score of 5-0 in games can be called “five-love” or “five-zero.”

The Origin of the Term Love

There is no universally accepted theory regarding the origin of the term love in tennis, but there are a couple of popular ones. The first, proposed by the Oxford English Dictionary, states that the term is rooted in the phrase “to play for love” (of the game), which speaks to the etiquette and sportsmanship of tennis.

Another theory suggests that “love” is based on the French word for egg; “l’oeuf”, because a zero looks like an egg. While clever, there is not much support to base this theory.

Regardless of the origins of the term “love” in tennis, one thing is certain; you should try to avoid it at all costs. There is a famous saying that states “love means nothing in tennis.” So, when you play tennis try to avoid love at all costs! As long as you can get away from “love” as quickly as possible in your tennis matches, you’ll be in good shape.