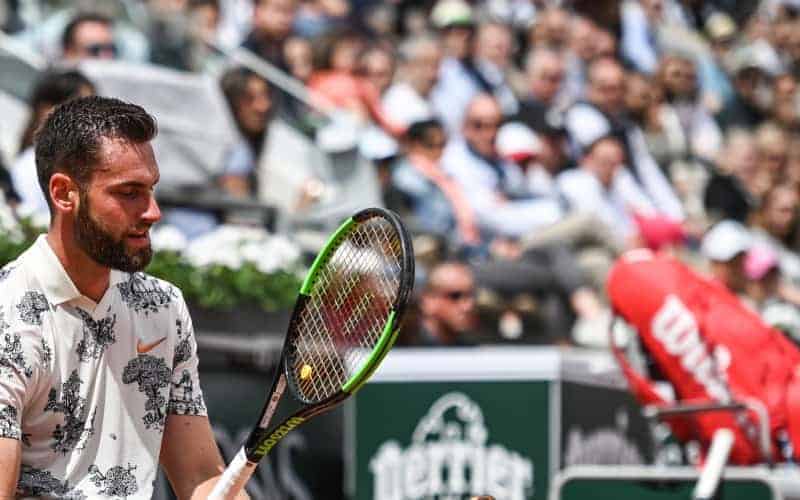 A typical club or recreational tennis player will rarely change the string or grip of their racket. They tend to get used to the way it feels, and as any changes to string tension or the condition of the grip are likely to be very gradual, they will just keep going until the string breaks or the grip begins to visibly deteriorate. They will not want to incur the expense of a restring or a new grip unnecessarily.

Top professionals, on the other hand, look at things very differently. They will want their rackets to be in optimal condition every time they take to the court, either for a match or for practice. They will therefore go on court with a batch of freshly strung rackets with new grips, and will change rackets whenever they consider it necessary. The pros will also use different string tensions for different atmospheric conditions or court surfaces.

The reason behind the frequent racket changes made during matches by top professionals is primarily to ensure that the racket performs exactly as they wish, with no variation and little chance of string breakage. They will have rackets strung at a range of tensions, in case conditions alter, and also to allow for the effect of new balls being introduced.

The racket head speed and power that professionals can bring to bear put their strings at risk of breakage. Although they will commonly use tough polyester strings, these may still only last a few hours. There is also a trade-off between the thickness of the strings and their playability. A top player would prefer to play with strings that felt good rather than ones that might last longer. To compensate for the increased chance of breakage, the top players will simply get a whole batch of rackets strung to their specifications every time they practice or play a match.

As Serena Williams has pointed out, if a racket string breaks it will probably cost the player a point, and that point could be an extremely critical one, so why take the risk? Of course, less wealthy players will not be able to afford to take such an extravagant approach, so this puts them at a slight disadvantage. The top players are meticulous and take no chances.

It is difficult to measure the actual tension in your strings once they are tied off in your racket. However, it is thought that they may lose about 5-10% of the tension they were originally strung at within 24 hours. This emphasises another reason why the top professionals want their rackets restrung every day. If they use rackets which were restrung a few days earlier, some tension loss will have already taken place, and the exact amount of this will be unknown.

Tension is also lost during play, to an extent depending upon the aggression of the player and the composition of the string. Top players’ wish for certainty means that they do not want to allow time for further deterioration to take place, so they will make frequent changes of racket.

New rackets tend to be fitted with grips which have a moderate amount of tackiness, but when in contact with the natural oils and sweat from a player’s hand this will rapidly diminish. It is possible to replace the entire original grip with a tacky, cushioned, absorbent replacement, purchased for a few dollars. It is relatively straightforward to replace the grip, with a little practice, and for a club player this can be the best solution.

Professionals will expect to have a ‘new’ grip every time they play, to avoid any risk of the racket slipping in their hand. They are most likely to do this by using ‘overgrips’. These are thin, tacky strips which, as their name suggests, are wrapped around the original grip to provide a new surface. They can be bought in bulk and are quick to replace- much more so than a full grip. Some professionals take things to extremes: Richard Gasquet will generally be seen putting a new overgrip on his racket at each change of ends in his matches. Others will just wait until they change their racket.

Why Do Players Change Rackets With New Balls?

During matches on the main tours, new tennis balls are provided every 7-9 games. These will be harder and quicker than the used balls, so professionals will want to allow for this. The most thorough players will change to a racket with a higher string tension when the new balls are brought out. The fear is that the new balls are more likely to fly long or wide due to their extra speed, and the tighter strings will help the players to feel more in control, at least psychologically.

Professional tennis players change their rackets very frequently. It could be argued that an enormous amount of time and effort is wasted in putting strings into rackets and cutting them out again, but the top players can afford it and the stringers are pleased to have a continuous flow of work.

The players are aware that at the highest level the margins are very fine, and they do not want to risk losing a match due to being less well prepared than their rivals. Nonetheless, the difference these frequent changes make is fairly minimal, and the standard of play would barely be affected if they did not take place, except perhaps where atmospheric conditions altered dramatically.