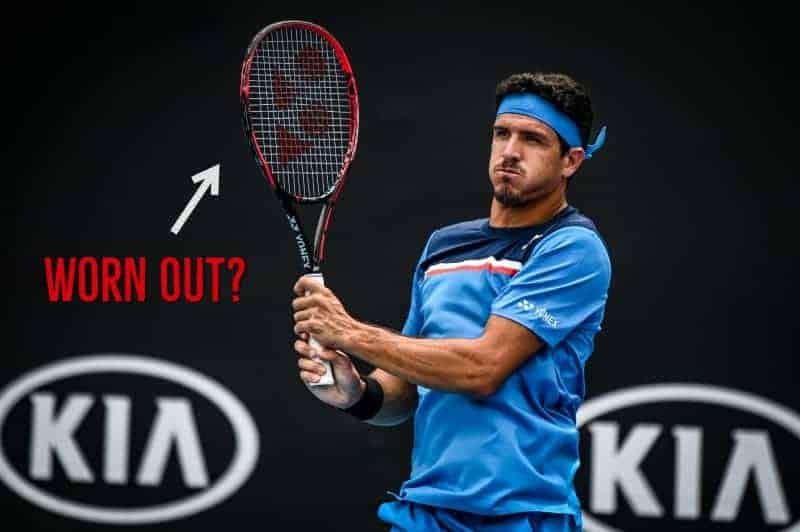 Most serious tennis players will change to a new set of rackets roughly every year. Top professionals will change their rackets more frequently than this, as they don’t want to leave anything to chance. However, some club players will keep using the same frames for decades, relying on the maxim: ‘if it ain’t broke, don’t fix it.’ So, is there a good reason for changing your rackets frequently, or do those club players with their trusty old Dunlops have the right idea?

For a club player, a racket frame can last a decade or more, but in the hands of a full-time player with powerful shots, it can wear out after a few months. Some players and their stringers are much rougher with frames than others, and their rackets will deteriorate faster. Once rackets wear out, they will feel different and need to be replaced.

Keeping two to four rackets should prevent crises, although once they are too cracked or scraped, you will need to change them anyway.

How Long Do Tennis Rackets Last?

Rackets are typically made up of fiber and resin of some kind. Frames are put under a lot of stress by the forces applied during play, especially when physically strong players hit big serves or aggressive groundstrokes. Eventually, the fiber and resin will begin to break down, and the racket will lose some of its stiffness. Since this happens very gradually, players might not notice the change.

Nonetheless, a reduction in stiffness will affect the power and spin that can be produced with a frame and limiting control. An expensive machine known as a ‘Racket Diagnostic Center’ (RDC) can check for any deterioration by measuring frame stiffness. Still, without this, you will probably need to rely on general guidelines to determine how long your rackets will last.

For a big hitter, training regularly and playing tournaments, rackets last about 1 year and tend to lose stiffness after that. A club player who does not hit the ball particularly hard and looks after their rackets can have rackets last for 10 years or perhaps more without problems.

Your racket’s lifespan will be affected by several factors. How often you play will clearly be one of these and how hard you hit the ball. Some others might be less obvious. Racket frames need to be stored appropriately: they could be damaged by excessive heat or cold.

The stringing process is also critical. The string is usually in fairly high tension and needs to be removed carefully, and the clamps holding the racket in place during stringing must not be too tight. If the stringer is careless, or their clamps have seen better days, the damage could ensue. Every time the racket is restrung, there is a risk of damage, so frequent restringing may also shorten frame life.

Of course, a racket can also be damaged during play, either through scraping on a hard court or through the player deliberately hitting it on the ground in anger. Professionals can afford to throw their rackets around, but this can become an expensive habit for amateurs: as soon as a frame cracks, it becomes useless.

How Many Tennis Rackets Should You Have?

If you are a club player, two rackets should be enough. If you break a string or even a frame, having a spare one in your bag will get you through. Just ensure that you only use one of the rackets until its string breaks so that your spare is unused. Carrying two rackets with worn string brings the risk that you might break both during one match and be left with none.

For a tournament player, you will want to have enough rackets to get you through a two-week tournament trip without having to use a possibly expensive and dubious local stringing service, so four or five should be adequate. Full-time pros might have ten or more with them, restringing them in batches for each event.

Unless you have an RDC, you are unlikely to detect the gradual deterioration of your racket frames. Nonetheless, other things can indicate that they are due to be replaced. If you play on hard courts, the outer part of the frame will gradually wear away, as it gets scraped on the court every time you retrieve a low ball.

This is easy to see, and when the wear and tear look significant, it is likely that the weight, balance, and stiffness of your racket will have changed, and it will be more likely to break. Even worse than this is the dreaded crack. If you discover a crack in your frame, it will not perform in the same way as it once did, and you will need to change it immediately.

Should You Change Rackets Even If They Are Still Good?

If you are young and becoming taller and stronger, you may need to change to a heavier racket even if your existing one is in good condition. Serious adult players need to change rackets regularly to avoid the effect of the gradual loss of frame stiffness, even though the rackets might still look good. For club players, your racket should last for several years: if it suits you, there is little point in incurring the expense of changing it frequently.

Look after your rackets, find a good stringer, and you’ll get good use out of them. Beware of gradual deterioration, but you will not benefit from changing your racket just to get the latest syle.