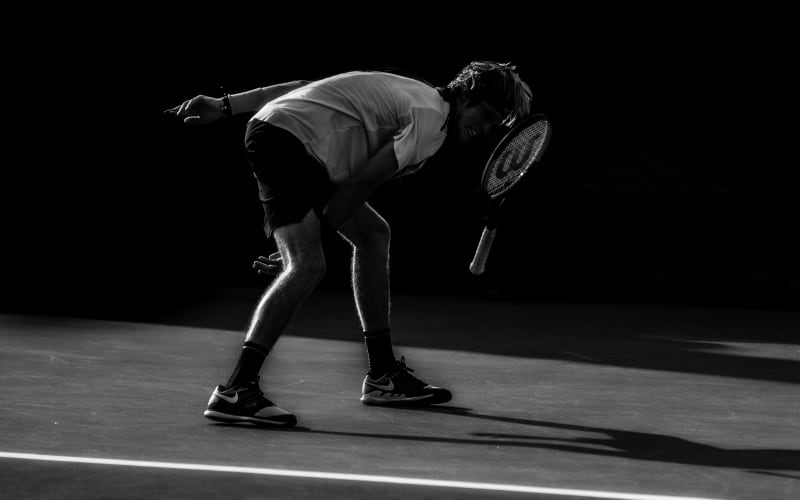 Tennis is considered to be a sport of gentlemen: class, tradition, and sportsmanship are considered essential traits of successful tennis players. Roger Federer and Rafael Nadal embody the essence of tennis – they’re absolute class-acts, and serve as role-models for kids everywhere across the world.

This is why tennis players are always shocked when they see Roger Federer breaking a racket (which happens roughly once every 15 years). Breaking rackets is one of those big “no-no’s” in tennis, as it is considered to go against what the sport stands for. As a tennis player you’re not supposed to do it; as tennis fans, you’re supposed to frown upon it – and yet, most of us secretly enjoy watching a nice racket smashing.

Why do tennis players, at the end of the day, break their rackets? During a tennis match, players can get increasingly frustrated after making easy mistakes and losing points. They cannot request a time-out, they cannot be subbed out, and they cannot scream – so their rackets end up being the only outlet to unleash their accumulated anger.

Tennis rules establish that players should get punished for breaking rackets, so this is another incentive not to do so. And still, some players are known to be big racket-smashers on the tour. The reason? We’ll cover that below.

Tennis is a very frustrating sport. While it’s very satisfying to hit winners (a good shot in which your opponent can’t reach the ball), it is just as frustrating to make errors – and even professional players make more errors than they hit winners.

As mentioned earlier, tennis players are expected to keep their composure throughout long matches – even after making mistakes. For the most part, players do a good job keeping it cool – until they don’t. When that happens, the natural reaction is to let the anger out on whatever you have on your hands – most times it ends up being either the racket or the ball.

This is somewhat of a “natural” reaction, and you can see it in other sports in which players have equipment in their hands. It is fairly common to see golfers breaking their clubs on their knees or throwing them away like a boomerang, and baseball players frequently break their bats on their knees.

Why Is Breaking Rackets Not Allowed?

In tennis, breaking rackets is considered to be unsportsmanlike conduct. This means that it is a behavior that goes against the set of rules established by the tennis association organizing the event.

These rules cover every area of a tournament, including the role of umpires, the prize money distributed to players, and participant conduct. Breaking a racket is a violation of these rules (called racket abuse), and as such is usually punished with a loss of points and a fine.

There are several other on-court violations that tennis players can commit, including ball abuse, audible abuse, visual abuse, lack of effort, and coaching violations. Each one of these has a different, pre-established punishment.

What Happens When You Break a Racket?

The biggest incentive not to break rackets is to avoid the financial punishment that comes along with it. We have written a full article that breaks down all the fines associated with it (you can check it out in here), but in essence ATP players can be fined up to $500 per occurrence while WTA players can be fined up to $2,500 per racket they break.

Players don’t need to actually break the racket in order to be fined. The rulebook says that “players shall not violently, dangerously or with anger hit, kick or throw a racquet or other equipment within the precincts of the tournament site. For purposes of this rule, abuse of racquets or equipment is defined as intentionally, dangerously and violently destroying or damaging racquets or equipment or intentionally and violently hitting the net, court, umpire’s chair or other fixture during a match out of anger or frustration.”

On top of the financial punishment, players also get punished with the loss of a point, game, or even set during the match. The first racket breaking generally results in a warning (no points lost), and the subsequent occurrences result in a point loss, game loss, set loss, and finally disqualification.

Finally, some players will argue that they play better after breaking rackets. They say that sometimes releasing all the pent up anger can finally allow the player to relax and start playing better.

Tennis has seen some notorious racket-smashers throughout history. These racket breakers were condemned at first, but then people started enjoying their matches in hopes that they would see a great racket smash. The list below has some of the most famous racket breakers in history.

John McEnroe is known to be one of the most eccentric players in the history of tennis, so naturally he’s also earned his spot in this list. Even at old age you see McEnroe going after it.

The absolute king of breaking rackets, Marat Safin has broken an estimated +700 rackets throughout his career. Quite an impressive accomplishment.

Gonzalez can be considered one of the most creative racket breakers of all time. In one occurrence, he started being booed when breaking the racket, and continued breaking it until people were clapping for him. Talk about charisma.

Marcos Baghdatis will forever be remembered as “the one dude who broke 4 rackets in a row”. Some of the rackets were still inside the bag.

Goran had a strong personality while on tour, and he once had to default on a match because he broke all of his rackets and did not have another one to play with.

Kyrgios still needs to do some work in order to catch up to the people above, but he’s definitely shown some potential when it comes to racket smashing. And with his attitude, chances are he might make it to the top of the ranking.