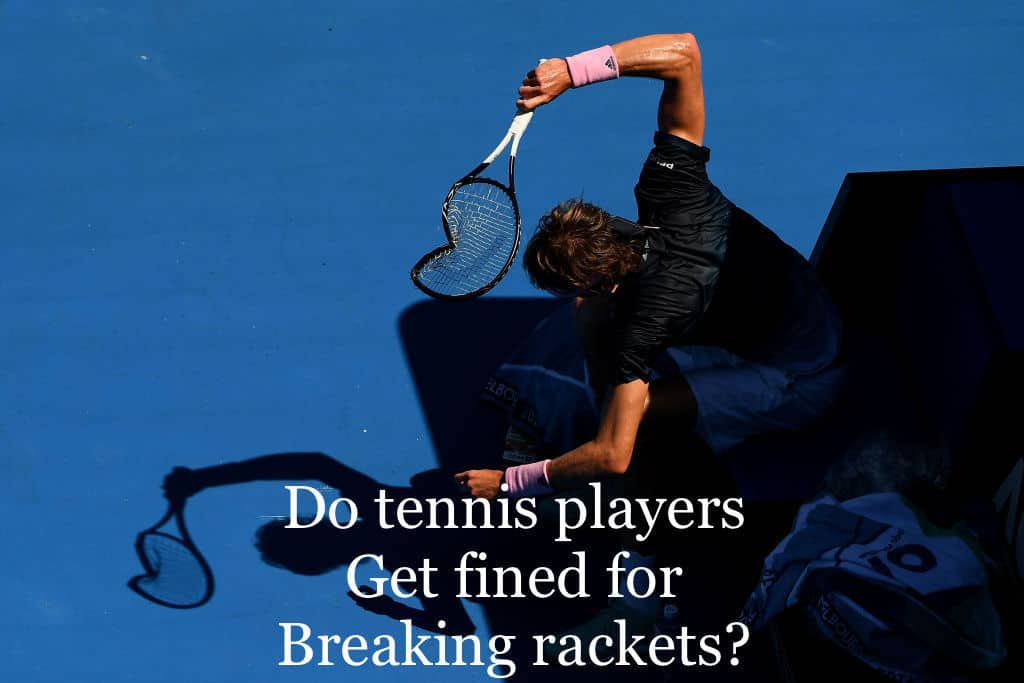 I could easily tell you I never broke a racket in my career, but truthfully, that would be a big fat lie; I’ve broken a few rackets in my career. Tennis is such an emotionally intense sport that sometimes the frustration gets the best of us. Almost every player with experience in competitive tennis has been in the position where they want to absolutely destroy their racket into pieces; it happens to the best of us. Now, if you are a club level player, the only financial burden that stems from your epic racket smash is the cost of a new one. However, professional tennis players get fined for breaking their rackets. Let’s find out how much.

According to the ATP rulebook, a racquet abuse violation can cost the player up to $500 per occurrence. Here is the official statement on the ATP rulebook:​ “Players shall not violently, dangerously or with anger hit, kick or throw a racquet or other equipment within the precincts of the tournament site. For purposes of this rule, abuse of racquets or equipment is defined as intentionally, dangerously and violently destroying or damaging racquets or equipment or intentionally and violently hitting the net, court, umpire’s chair or other fixture during a match out of anger or frustration. ii) Violation of this section shall subject a player to a fine up to $500 for each violation.”

On the WTA side, players can be fined up to $2500 for breaking a racket. Here is the WTA rulebook statement: ​“For the purposes of this rule, abuse of racquets or equipment is defined as intentionally, dangerously, and violently hitting the net, court, umpire’s chair, or other fixture during a match out of anger. Violations of this Section shall subject a Player to a fine up to $2,500 for each violation”.

In ITF events (futures), the final amount of the penalty is decided by the tournament supervisor but fines are typically under $200.

While it seems that the ATP and WTA have guidelines on racket abuse fines, we often hear about players getting astronomical bills after on court misbehavior. Let’s learn more about it below.

The first thing you need to keep in mind is that ATP and WTA players are under the microscope of the two entities. Tennis players are expected to follow behavior rules established by the ATP and WTA that on and off the court when they are competing at events. When we talk about racket abuse fines we usually think about the times we watched players do it live or on TV but players can be fined for racket abuse even during practice sessions. At the 2019 Wimbledon tournament, Serena Williams was fined $US10,000 for damaging a court after throwing a racket during practice. Her fine was labeled “unsportsmanlike conduct” and that is why it was so high.

Largest Fine Of All Time

If $20,000 sounds like a lot, you will want to cry after you hear how much Nick Kyrgios was fined for his racket-smashing rant at the 2019 Western and Southern Open. In the ocasion, the Australian was fined for racket abuse, ball abuse, leaving the court, audible obscenity, five unsportsmanlike conduct penalties and verbal abuse. The total fine? $113,000. It all started with a time violation handed down by the chair umpire Fergus Murphy. Kyrgios accused Murphy of being biased and repeatedly verbally attacked him during the course of the match. When Kyrgios was denied a toilet break, he left the court anyway carrying two rackets. A few moments later, the australian came back with two broken rackets. After everything was said and done, Kyrgios was awarded the massive fine and was put on a 16 week probation, meaning that if he infringed any more rules he could face a suspension.

Another thing to keep in mind is that racket manufacturers can also financially punish players for racket breaking. In 2017, Yonex introduced a contract clause that allowed them to strip a portion of the player’s retainers for every racket smash. The move was unprecedented and didn’t bode well well with their clients. While still not enough to put a big dent in the pockets of elite players, Yonex decision to do so helps the brand separate their image from moments of ire of their players.

So there you have it. Personally, I always thought that the act of breaking a racket was enough for players to get big fines. It turns out that doing so is not such a big deal, but throwing a tantrum is the main driver of big fines. Now tell us, did you ever break any rackets? What is your best breaking racket story? Let us know in the comments below