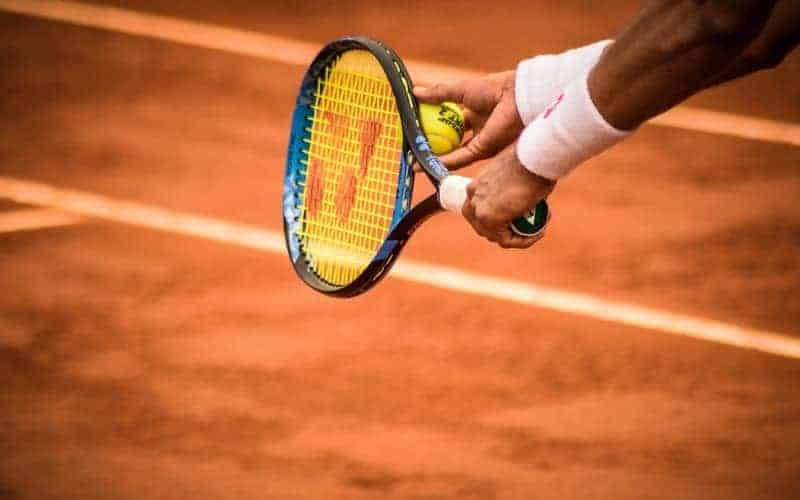 Traditionally, the majority of big tournaments were played on grass, offering a low, potentially uneven bounce. This meant that most players tried to keep the ball low and made every effort to get to the net when possible. To make this easier, they tended to use a ‘continental’ forehand grip, and they would play a single-handed backhand without a significant grip change. As surfaces and technology have changed in recent decades, players have switched to using grips more suited to developing topspin, and the double-handed backhand has become increasingly popular. So which grips are most common at present?

The most popular forehand grip in tennis for serious players is somewhere between semi-western and full western, enabling them to hit topspin shots. The most popular backhand grip is the double-handed backhand. For the serve, a continental or chopper grip is almost exclusively used, and a similar grip is typically employed when volleying.

Most Popular Grip For Tennis Forehands

To describe the most popular grips, it will help to look at the ‘bevels,’ which are the flat sides of the racket grip. These can be numbered as below.

The key difference between the various grips is in the placement of the knuckle below the index finger and the heel of the hand.

The eastern grip lends itself to faster, flatter shots, while the semi-western makes it easier to produce topspin and is perhaps better suited to higher-bouncing balls. Some players prefer to use a grip somewhere between eastern and semi-western as a compromise.

For players who prefer slow, high-bouncing surfaces such as clay, a more extreme grip can be helpful. This will make it really easier for them to apply a lot of topspin and enable them to deal with higher balls. Some players will adopt a western grip, where the index knuckle and heel are on bevel 5. This is ideal for creating topspin, although it can make playing low balls difficult and necessitates a significant grip change to play other types of shots such as volleys.

Others will prefer a semi-western grip, which also allows the creation of topspin, but lessens the difficulties associated with extreme grips. Again, some players will compromise by choosing a grip somewhere between western and semi-western.

Since the 20th century’s latter part, the double-handed backhand has become the more popular option. For a right-hander, the double-handed backhand normally involves placing the right hand near the base of the grip, with the left hand further up. The right hand’s index knuckle will be on or near bevel 2, with the heel of the right hand on bevel 1. The heel and index knuckle of the left hand will be on or near bevel 7. This grip allows the ball to be hit flat and hard, but allowing the left hand to take over can produce more topspin.

A number of players do still adopt a single-handed backhand, which allows a greater reach and more variety of spin and angle. If they wish to slice the ball, the index knuckle and heel tend to be close to bevel 2 (continental grip). For topspin, the index knuckle and heel will typically be somewhere between bevel 8 (semi-western backhand) and bevel 1 (eastern backhand).

A continental grip is also preferred by most players when they move to the net to hit an orthodox volley. It is generally better to apply very little spin to these, and it can be necessary to quickly switch from forehand volley to backhand volley. The continental grip can really be used for both forehand and backhand and produces flat shots, so it is rare to see a good player using anything else when volleying.

What Grips Do The Pros Use?

Virtually all pros are likely to use a continental grip when serving or volleying, but their groundstrokes will be generated with differing grips. For example, Rafael Nadal, who is famed for his heavily topspun forehand, uses something approaching a full western grip for this, whilst his flatter double-handed backhand is produced using a grip similar to the popular one described earlier.

In the women’s game, there is a tendency to produce flatter shots, so grips are typically less extreme, and the two-handed backhand is very widely used. Serena Williams, for example, uses something between eastern and semi-western for her forehand whilst employing a fairly standard double-handed backhand grip on the other side.

If you are learning the game, consider trying the popular grips first, as they are generally popular for a reason. Nonetheless, keep in mind that it is all about what works best for you, as no two players are identical.

Continue Reading
link to How Can I Book A Tennis Court?

If you are not a regular player but would like a game of tennis, the first thing you need to work out is where you are going to play. You may want somewhere cheap and easy to get to, or you might...