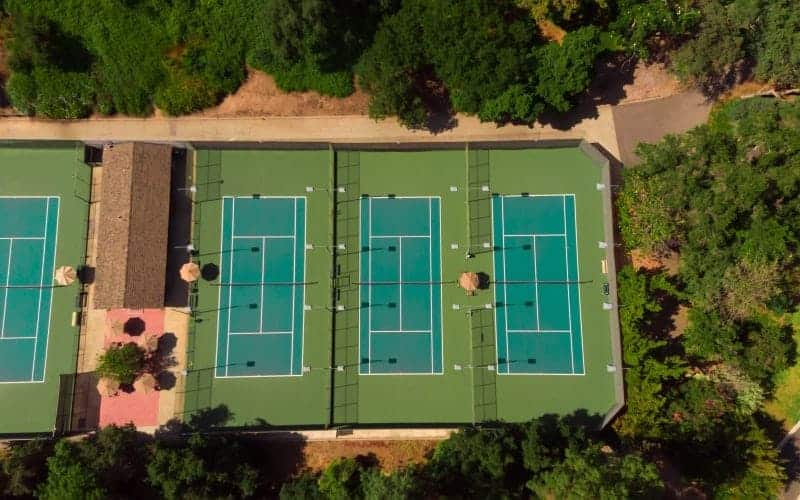 If you are a young tennis player with ambitions of getting to the top or the parent of a promising junior, you are probably looking for a tennis academy that can help move you or your child to the next level. The ideal academy for someone who wants to commit to the game full-time will offer the following features:

Texas is a state in the US with a climate that certainly fits with playing outside all year, although the winter can be a bit cold, and summers are pretty hot, so any academy there will satisfy point 11. This is one of the various reasons why you will find a range of excellent academies in Texas. In this article, I will check at five of the best and compare them to the ‘ideal’ template above.

The San Antonio Tennis Academy aims to develop players to college standards through three intensive sessions per week. The Houston Tennis Academy offers a four-session program, whereas Brookhaven offers a much wider choice of session times in summer. The John Newcombe Tennis Ranch and the Austin Tennis Academy offer full-time programs, but the former may be more suitable for those aiming for the very top.

At San Antonio, the ethos is very much to encourage young players to reach the best standard they can, to raise them to college standard or above. For their year-round academy, they run three sessions per week, Tuesday to Thursday, 5 pm until 7:30 pm, at the Alamo Heights Tennis Center. There are 12 hard courts available at Alamo Heights, so a substantial number of players can be accommodated. To attend all three sessions currently costs $72 per week or $3,744 per year. You can only attend if you are at least a ‘Champ’ level junior, and the highest level of players there are likely to be college standard.

At the academy, they claim to use innovative training methods and focus on all of the important characteristics needed to improve, including mental toughness and ‘tennis IQ’. It seems that San Antonio Tennis Academy would be a great choice if you are looking to develop your tennis alongside your normal school commitments, to play to a good standard at college. In terms of the ‘ideal academy’ criteria, numbers 4 to 8 are either not relevant or not satisfied, but they do a pretty good job with the rest, especially keeping to a low budget.

At Houston Tennis Academy, the program benefits from being located at Club Westside, which boasts 30 tennis courts, including four indoor, as well as a fitness center. Most are hard courts, but there are nine clay courts. Over the summer, they offer five sessions per week, running from 4:30 to 6:30 pm, for Champ and Super Champ players. This program costs $425 per week, which is almost six times the training cost for three days per week at San Antonio. The question here is, what do you get for the extra money?

The most significant benefit of playing at the Houston Tennis Academy is the opportunity to train at Club Westside. With its swimming and fitness facilities, it offers more of the feeling of a resort than a tennis club, and there are plenty of courts to train on. The coaches who run the academy emphasize their role as mentors and focus on three key areas: discipline, accountability, and effort. They aim to offer intense training combined with camaraderie and fun. The academy also claims to help players balance their sporting, academic, and other commitments, so this is a ‘holistic’ approach, looking at pupils as complete people and not just tennis players.

In comparison to the ideal academy, Houston ticks most of the boxes. However, it is non-residential, without an academic program, and does not appear to employ a sport psychologist, meaning that it falls short on 5, 6, and 8. Point 10, the cost element, maybe a bit high for some. Nonetheless, it will certainly give promising players a chance to improve their game in a pleasant environment.

Academy of Tennis Training at Brookhaven

The Brookhaven Academy is based at Brookhaven Country Club, located at Farmers Branch, northwest of Dallas. The club offers a variety of memberships, but for those who are focused on tennis, and do not wish to pay for a golf membership, the adult joining fee is approximately $300, with ongoing membership fees of around $360 per year, although there is normally a waiting list. The club features 39 tennis courts, primarily hard courts, with 16 being indoor or covered and 5 being floodlit outdoor clay.

The Academy includes a high-performance section for players who are Champ or Super Champ level or above. At Brookhaven, during the summer, players can book training sessions at various stages during the day. If they are part of the high-performance academy, the expectation is that they will take part in two 2 hour sessions per day. These sessions will be designed to cover technical, tactical, mental, and physical aspects. The academy appears to be very much aimed at preparing players for collegiate tennis. In terms of cost, a sliding scale is used. One session is $50 for a Brookhaven member, whereas 28 or more sessions in the summer are $760. Non-members typically pay $30 extra, reflecting the monthly cost of a Brookhaven membership. These costs are relatively reasonable: a comparison shows that 10 sessions at Brookhaven will cost less than 5 at Houston.

Comparing the Brookhaven Academy with the ideal, it certainly does the job in terms of facilities, court surfaces, and availability. A player could enjoy a really intensive training block at Brookhaven without breaking the bank. The club has a lot of covered courts, so the weather cannot stop training, although the academy is likely to offer far fewer training options in the winter. As a non-residential program with no evidence of a sport psychologist, it falls short on points 5, 6, and 8. However, it still offers a great opportunity for young players to work hard on their game, especially over the summer.

Set in Texas Hill Country, between San Antonio and Austin, the John Newcombe Tennis Ranch styles itself as one of the premier tennis facilities in the world. Founded by the legendary former world number one whose name it bears, the Ranch offers 27 hard courts, 4 clay courts, excellent fitness facilities, and what their website describes as ‘camper style accommodations’. On top of this, there is a soccer field, a basketball court, and a swimming pool.

The academy is generally known as the ‘Newks’ Tennis Academy, honoring its founder’s nickname. It offers a full-time residential academy, although it does accept local players who commute. Prices for the full-time academy are not stated on their website, and there are scholarships available for the ablest, but as a guide to the cost, they currently charge just over $3,000 plus tax for a three-week block of training in their summer camp. They emphasize their concept of ‘team-family-team’, which sums up the atmosphere they aim to generate as they nurture and develop players. The academy operates on a holistic basis and works alongside the local high school to ensure that both academic and sporting goals are met. They put a high value on fitness work and take sport psychology seriously. Unlike the other academies described so far, Newks Academy is set up to give players the opportunity to reach the top of the game, rather than collegiate level. This is illustrated by the fact that alumni include former Grand Slam Champions Lleyton Hewitt and Li Na.

In terms of the ‘ideal academy’, Newks satisfies every requirement apart, possibly from being cheap. However, with scholarships available, even that might not be an obstacle.

Also set in Texas Hill Country, around 25 minutes west of downtown Austin, the Austin Tennis Academy aims to help young people achieve their potential ‘as tennis players and human beings’. They want to develop ‘citizens of significance’. The Academy boasts 12 hard courts and two red clay, along with a fitness center.

The Austin Academy emphasizes the quality of coaching offered, along with the support they can provide at tournaments. Their all-year-round, non-residential program typically includes four sessions per week, starting at 5 pm and running for 2 to 2.5 hours, plus a monthly Saturday morning session. In the summer, these are supplemented by sessions from 1 pm to 4 pm every weekday. The focus appears to be on obtaining a college scholarship, and they seem to have a good track record in this area. They clearly care about developing their students’ character and respect their need to have other priorities outside tennis, particularly academic ones. There are classrooms on-site where academic work can be done. The cost of a year at the academy is not stated on their website, but a year’s training, excluding individual tuition, is believed to cost around $15,000, which is relatively cheap.

In relation to the ‘ideal academy’, Austin lacks in 5, 6, and 8 as it is non-residential and does not appear to employ a sport psychologist. Still, it appears to offer a cost-effective way to give yourself a good chance of a college scholarship.

No academy is truly ideal, but the criteria at the start of this article should help you judge which of the Texan academies is most suited to you or your child. If you are ambitious to reach the very top of the game, only the John Newcombe Tennis Ranch is set up for this. Its full-time residential program and record of producing champions tell you all you need to know. It is a pleasant but functional location, which is ideal for focusing on your sport. If you are aiming for a college scholarship, the other academies are very much worth considering. Here, the choice is between the excellent value offered by the modest program at San Antonio, the fuller program at Austin, or the luxurious settings of the Brookhaven and Houston Academies. Budget will undoubtedly be a factor for many, but I recommend trying out the various options. If it feels right in terms of atmosphere, you will probably thrive there.

link to The Top 10 Best Tennis Academies in California

Along with Texas and Florida, California has long been known for producing the highest level of tennis in the USA throughout the years. A big reason for that? There are countless California academies...

Along with Spain, France, and Argentina, the United States has produced one of the largest numbers of top tennis players in the world. Not only known for developing young American players, the United...