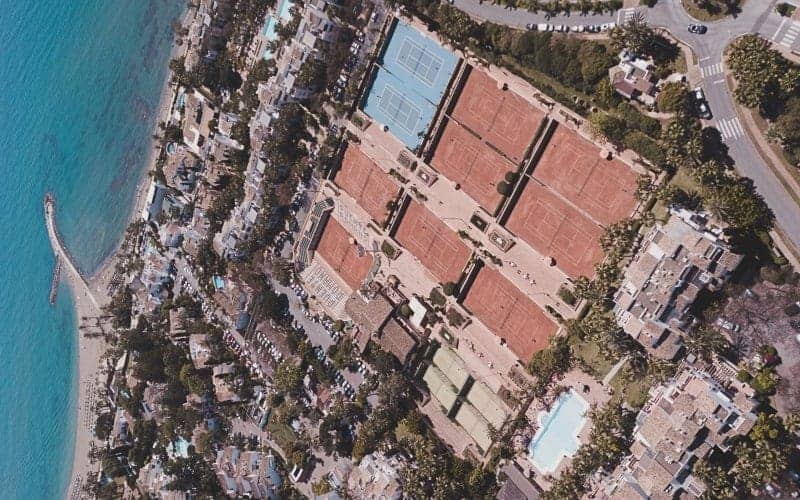 Florida boasts warm weather all year round, which makes it an ideal location for tennis. As a result, it boasts a number of excellent academies. There are 11 key features that the best academies should have:

In this article, I will describe 10 of the leading academies in Florida. All of them satisfy number 11, but do they meet the other criteria that might mark the ‘ideal academy’?

Bill Clark describes himself as a two time Florida coach of the year with 35 years of coaching experience. His academy is located in Hollywood and is fairly basic, with 8 hard courts, but it offers everything players need to develop and improve. It is not competing with the likes of IMG and would not be the first choice if you aim to be world number one, but on a lower budget, it offers an opportunity to train regularly with good players and experienced coaches. At the high-performance part of the academy, players can attend between 2 and 5 sessions per week in the afternoons, each lasting 2-3 hours. In terms of the ‘ideal academy’, it does not meet criteria 4 to 8, but it is certainly worth considering if your aim is to play tennis in college.

The promotional material for Rick Macci’s academy is far more bold and brash, emphasizing his status as a coach to 8 Grand Slam champions. His academy sells itself very much on the quality of the coaching and the low coach-pupil ratios. The academy is based at the Rick Macci Tennis Center in Boca Raton, which boasts 19 hard courts, including three indoors, and remains available for use by the public. With characteristic hyperbole, the website describes it as ‘Disneyland and Candyland wrapped into one’.

In terms of cost, the Macci Academy does not come cheap. Although not stated on the website, it is likely to cost around $2,000 per week to train there. Individual lessons from the maestro himself cost a remarkable $600 per hour and are booked months in advance. The fact is, people are prepared to pay for something that has been proven to succeed. This academy does not seem to offer academic education, and the only criteria on the list it is guaranteed to satisfy are 1, 2, 3, 9, and 11- but if Rick can make you a star, many would say ‘who cares’?

The ClubMed Academy is based at Club Med Sandpiper Bay in Port St. Lucie. There are excellent facilities for several sports there, some of which have their own academies on site. For tennis, there are 14 hard courts and 6 clay courts. The ClubMed Academy is run by head coach Gabe Jaramillo, who has coached 27 top 10 players during his career, and fellow Director Scott Del Mastro, who holds a Master’s degree in Sport Psychology.

The full-time program at Club med is residential, and academic work is scheduled at specific times. From Monday to Friday, the way players spend their time is tightly organized from 7 am until 9 pm, with lights out at 10:30 pm. A typical day will incorporate 3-4 hours of tennis training, along with an hour of conditioning and around 6 hours of schooling. On Saturday, there might be 4 hours of competitive play in the morning, with the afternoon and Sunday being free. They use a ‘farm’ system, in which players are encouraged to compete with each other for status within the group. The program is clearly tough, but they have a record of producing good players. As expected, this is not cheap, currently costing around $68,000 for a ‘year’, running from August to June. Nonetheless, apart from number 10, it satisfies the majority of the ‘ideal academy’ criteria, as long as you are happy with the ‘farm’ system.

The Proworld Tennis Academy is based in Delray Beach, on a site with 15 hard courts and 3 clay courts. They offer an established team of coaches from around the world, working under Managing Director Lorenzo Cava. They emphasize the importance of the range of backgrounds they come from in creating a diverse and multicultural environment in which any athlete can thrive. The team aims to provide the skills and mindset needed for players to achieve their potential.

The full-time training program at Proworld consists of 3.5 hours of tennis per day, plus an hour of fitness work, 6 days per week. In addition, an hour of mental skills training is provided weekly. This currently costs $3,200 per month or $38,400 per year. Criteria 5, 6, and 8 are not satisfied, partly due to the lack of a residential program or academic support. Nonetheless, training at Proworld is a lot cheaper than some other options, and it could well be worth checking out.

The Extreme Tennis Academy is run by experienced coaches Freddy Azucey and Carlos Maehama, and both have a record of producing successful junior players. The academy is located at a private club, the Michael-Ann Russell Soffer Family Tennis Center in Aventura, which offers 12 floodlit courts, including 9 hard courts and 3 clay.

The full-time program at Extreme is aimed at advanced players looking to excel and aiming for a place on the professional tour. They claim to offer ‘innovation, ingenuity, and an unparalleled reputation for excellence’. Accommodation is available, and the full-time program, for a boarder, is priced at $42,000 per year. They also offer a more limited and cheaper after-school program for players who aim to play at the college level. They probably do not satisfy criteria 5 and 8, but otherwise, extreme sounds like a viable option for ambitious players.

The Evert Tennis Academy was established in Boca Raton in 1996 by tennis legend Chris Evert along with her father and brother. The campus offers 12 hard courts and 11 clay courts, with a further 25 nearby courts available when needed. There is a strength and conditioning room, and accommodation is available. The academy aims to develop collegiate and professional tennis players through ’embracing daily challenges’. They focus on instilling four core values: excellence, resilience, integrity, and leadership.

A typical day for students in the full-time academy program includes 4 hours of tennis, an hour of conditioning, and 3.5 hours of school, supplemented by 90 minutes of private study at the end of the day. This keeps them busy between 7 am and 8:45 pm on weekdays. The Evert Academy clearly takes schooling seriously, and several study options are available. Their ‘year’ runs from mid-August until late May and currently costs $45,500. They fulfill most of the ‘ideal academy’ criteria, although 8 is questionable as they offer little information on mental training, and 10 depends on what you can afford.

Following a successful playing career, Nick Saviano has coached many leading players, including, in recent times, US Open champion Sloane Stephens and Wimbledon finalist Eugenie Bouchard. He has developed what he calls the ‘Saviano Method’, by which he enables players to unleash their ‘creative genius’. The academy is located at the David Posnack Jewish Day School in Davie, where there are 4 clay courts and 4 hard courts.

The full-time program at the Saviano Academy is very much focused on tennis. A typical day includes 4 hours of tennis and an hour of conditioning, with ongoing mental skills work. A 9-month ‘year’ currently costs $30,550. Criteria 5, 6, and 8 are not satisfied, as this is not a boarding program with educational support. Criterion 3 is also doubtful with just 8 courts, but this academy’s attraction is the track record of its founder.

Part of the world-famous Sanchez Casal Academy, founded in 1998 by former leading players Emilio Sanchez and Sergio Casal, Academia Sanchez Casal is located in Naples on a site featuring 33 clay courts and 5 hard courts. This balance reflects the belief of the Spanish founders that clay is the best surface for young players to train on.

Sanchez Casal has a worldwide reputation, earned from working with many leading players. They base their training on their ASC Developmental Pyramid model, focusing on technical, tactical, physical, and mental skills. It is clear as well that a lot of thought has gone into their educational program. A typical week for an under-16 player at Sanchez Casal would include 10-17 hours of tennis, 4 hours of conditioning, plus an hour of group mental skills work. On top of this, there would be 30 hours of schooling. Fees are not stated on the website, but they are likely to be $60,000 plus for a 9-10 month ‘year’.

Academia Sanchez Casal will satisfy most of the ‘ideal academy’ criteria, although the cost will be high, putting criterion 10 in doubt.

The Saddlebrook Tennis Academy in Tampa was originally set up by Harry Hopman and boasted 45 courts, including all 4 Grand Slam surfaces. It runs in conjunction with Saddlebrook Preparatory School, enabling it to provide a full ‘academy’ experience for boarders. The coaching team, under Director of Coaching Rick Crockett, ensures that players are given a weekly theme, get plenty of competition, and are well versed in the importance of goal-setting and accountability.

A typical day for a full-time player at Saddlebrook will incorporate around 4.5 hours of school and 4 hours of tennis, plus fitness work as necessary. Mental skills training is delivered by qualified professionals. Fees are currently $63,560 per year for full-time boarders.

Saddlebrook will satisfy most of the ‘ideal academy’ criteria, although it is far from cheap. It lacks the high profile coaches of some of its rivals but is associated with a school and has an impressive range of courts.

The IMG Tennis Academy was established in 1978 by Nick Bollettieri and is now famous around the globe. It is based on a 600-acre campus at Bradenton, featuring 34 hard courts, 17 clay, and 4 indoor, with even more under construction. The key difference between IMG and most of the other academies described here is its sheer scale. There are large numbers of talented players competing with each other on a daily basis, striving to stand out.

At Bradenton, there are academies for several sports, and education, character development, and social responsibility are all taken seriously. Usually, the morning will be taken up with school, with the afternoon featuring tennis and physical and mental conditioning, but this can vary. The cost for an academic year is currently around $83-86,000.

The IMG Academy will satisfy most of the ‘ideal academy’ criteria, except 10, as it is expensive by any measure. Criterion 9 could also be questioned, as the academy has traditionally required players to fight their way to the top. Nonetheless, it offers everything a player needs to succeed.

Any of these academies will benefit your tennis: if you are interested, visit a couple you can afford and test out the atmosphere.

link to The Top 10 Best Tennis Academies in California

Along with Texas and Florida, California has long been known for producing the highest level of tennis in the USA throughout the years. A big reason for that? There are countless California academies...

Along with Spain, France, and Argentina, the United States has produced one of the largest numbers of top tennis players in the world. Not only known for developing young American players, the United...