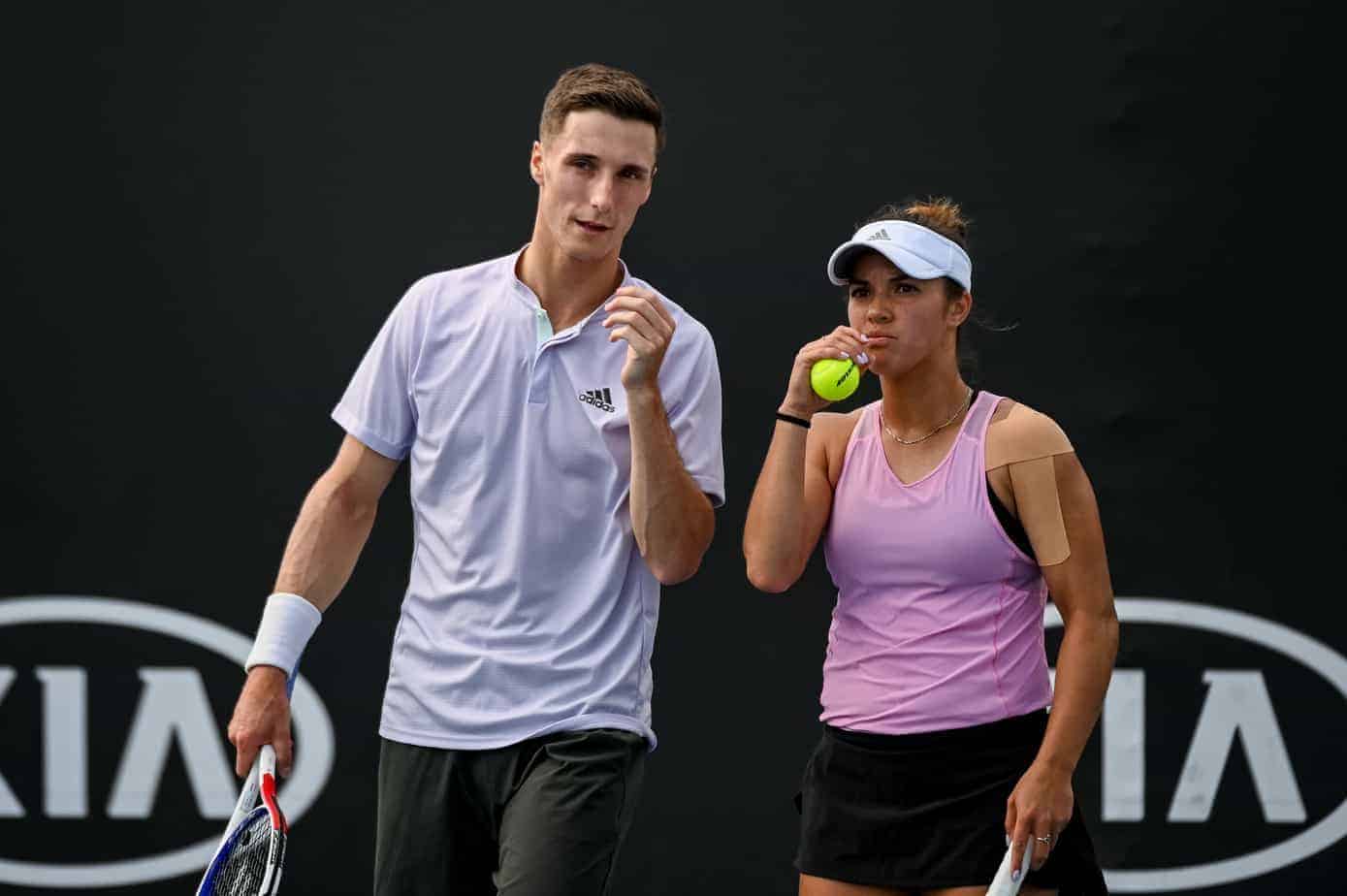 In tennis, there are two main events that you can play: singles and doubles. Singles in played 1 on 1, while doubles is played 2 on 2. For the sake of this article, we are going to assume that you already understand the basic rules of tennis in general. If you aren’t familiar with those, be sure to check out our article “Tennis Rules: Everything You Need to Know.” This way we will better be able to walk you through the similarities and differences between the two events.

So what are the main differences between singles and doubles? The scoring is generally the same (we will get into details later in the article) but the main differences come in serving order and where each person is allowed to stand. You serve so that each player has their own service game where they serve for the entirety of the game. In the next game that your team serves (two games later), the other player will serve.

We will go into full details of doubles rules, scoring, serving order, and tiebreak order below. Let’s get right into it:

The scoring rules in doubles are similar to those of singles. When your team wins a point, you are awarded “15, 30, 40, and game.” In most tournaments including on the professional tour, doubles is usually played with no-ad scoring. This means that the point at deuce is sudden death, and the receiving team gets to choose the side they want to play it on. You will want to be sure to discuss whether you and your friends are playing “no-ad scoring” or “regular scoring” before you start playing.

How Many Sets In A Doubles Tennis Match?

If you are playing recreationally, this again is something that you should discuss with the other players before you start. Usually you will either play 1 set or 2 out of 3 sets with a 10 point tiebreaker instead of a full third set. However, it comes down to the preferences of the group and how much time you all have to play.

On the professional tour and in amateur tournaments, it is most common that 2 out of 3 sets are played with a 10 point tiebreaker in lieu of the third set. There are some tournaments that play differently, like some Grand Slams that play 3 out of 5 sets, but this is the typical format.

Again, the third set rules for doubles vary on the tournament. Each tournament will specify their rules prior to matches starting. It is rare that doubles tournaments play a full third set. Most tournaments will shorten it to a 10 point tiebreaker if the first two sets are split 1-1.

The serving rules for doubles commonly throw people off, so don’t worry if it seems confusing at first. Each game has only one server for the entirety of the game. Just as in singles, opposing teams will switch off serving to each other.

The only time that you are allowed to choose which doubles partner serves first is at the beginning of the set. It is up to you as a team to decide who will serve for you in your team’s first service game.

So how should you decide? Typically, you will want to start with the stronger server because as the set goes on, there is a chance that the person who served first will end up serving more games in total. However, there are other things to consider such as:

Who Serves First In Second Set?

For the second set, you can choose again which of you serves first. Even if you served last to end the first set, you can serve first in the second set. Many think that you must continue your order into the following set, but that is not true. As a team, you are allowed to choose who starts serving the set.

So how should you decide who starts serving the second set? Again, it is better to have the stronger server start the team off. By this time, you and your partner have both served at least once, so you know who has been having more success in their service games. Use that information to make your decision. If things are going relatively well in your team’s service games, I find it more important to keep players on the same sides of the court so that nothing changes in the conditions.

How Serves Work In A Tiebreak?

Tiebreakers are confusing, there’s no getting around it. Hopefully we can clear up any questions you have. In doubles, things become even more complicated because there are more people.

First, you need to know how a tiebreaker works. Here are the basics:

Those are the basics, now how do serves work? Team A will serve the first point if it is their turn to serve (their team served at 5-5). After the first point, teams will switch off serving 2 points at a time. So, it’s 1-2-2-2-2 etc. until the tiebreaker is completed.

This gets a bit more complicated in doubles. In doubles, teammates must alternate who serves each set of two points.

*Teams switch ends of the court*

Unlike starting a new set, the order from the set must be followed heading into a tiebreaker. However, if a 10 point tiebreaker is played in lieu of a third set, teams can choose who they want to serve first, as it counts as a new set.

This section will tell you everything you need to know about where to stand in doubles. There are two factors to this: where you should stand and where you are allowed to stand.

Where to Stand When Serving

In general, the serving team in doubles has an advantage. Therefore, the server’s partner will almost always stand at the net, ready to put away an easy volley earned from the serve. They will be standing on the opposite side of the court from their serving partner. You can see this below:

Technically, the server’s partner can really stand anywhere. Although it is uncommon, the rules allow for them to stand on the baseline with their partner if they want.

The servers partner can also, by the rules, stand on the same side as their partner. This is called “Aussie Formation.” This strategy is shown below and is used as a way to lure the returning opponent to hit the ball down the line.

Where to Stand When Returning

When returning, there is really no “right” or wrong place to stand as far as where you should stand strategically. Some teams prefer the returner’s partner to stand at net, while other teams play with both players on the baseline. Both of these options are highlighted below:

There are, however, a couple of rules on where you are allowed to stand when returning serve in doubles. When returning, you must stand in the court that you are receiving serve from. Your partner must stand in the opposite court. In other words, the receiver‘s partner cannot stand on the side with their partner. This is seen as an obstruction and is against the rules. This rule is shown in the image below.

After the return is hit, teams can do whatever they want. They can switch sides as they please, as long as it is during a point. This typically only happens when it is necessary by defense.

Can You Switch Sides In Doubles?

This question comes up a lot. Let’s say your partner is having a hard time returning on the deuce side on a particular day. Are you allowed to switch with him? Yes, you can, but it has to be in between sets. The rules state that you must stay on the same side that you start on from the first point for the entirety of a set.

This rule is put into effect because it prevents partners from switching sides every point. Think of it this way. If my partner was Roger Federer, I would want him returning on every point. This rule assures both players each return on roughly half of the points in a set.

As I mentioned above, you can switch sides during a point. Once the return is struck, players are allowed to move freely however they please.

And there you have it: all of the basic rules of doubles. Hopefully this article gave you everything you need to know to get out there and enjoy a competitive (or hit and giggle) match with your friends. As always, if you have any questions about more doubles rules, feel free to reach out and let us know!