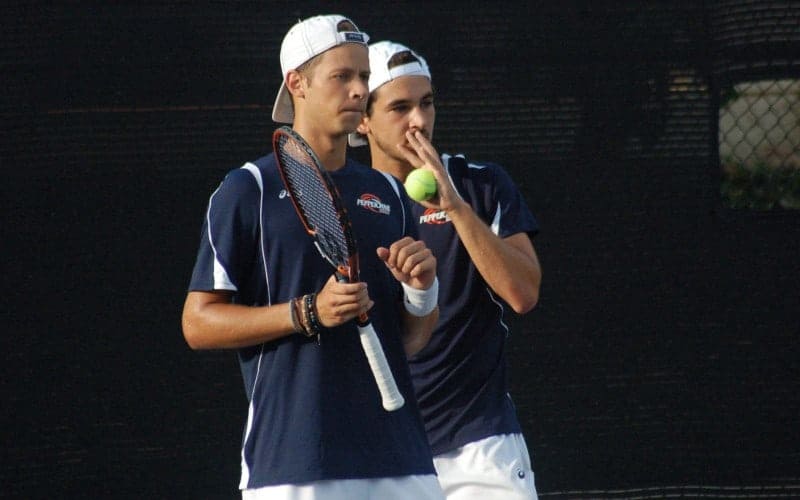 If you have ever watched a doubles tennis match, chances are you’ve witnessed two partners approaching each other between points, getting really close, covering their mouths, and whispering something in each other’s years. While it may seem a bit strange, you should rest assured knowing that they’re not engaging in any sort of twisted pillow talk or gossiping about their opponents’ outfits.

What do tennis players whisper to their doubles partners? Between points, doubles players communicate to each other what their strategy for the next point is. Common things mentioned are where the serve or return will go, and where the net player should position himself after the first shot. The reason why they whisper is so the opponents won’t hear the strategy.

Doubles tennis matches require an incredible amount of coordination and strategy, even though not many people are aware of that. It takes great communication to work as a true doubles team on court – otherwise you’re just two singles players trying to share the same court space. Below we’ll go into more details about what exactly players whisper to each other.

Why Do Tennis Players Cover Their Mouths?

Doubles tennis players cover their mouths in order to keep their opponents from figuring out their strategy. Even though the opponents are on the other side of the court, they could possibly read lips – or a coach nearby could eavesdrop on the strategy and alert his or her player.

If I’m telling my partner that I’ll serve to our opponent’s forehand and somehow our opponent hears that, he will have a huge advantage when returning the serve. This is why doubles players cover their mouths when whispering. Even though this may be obvious for big tennis aficionados, it may not be that clear for new tennis fans.

While doubles partners could technically be whispering anything to each other, there are 4 main topics that they usually address: where the serve/return will go, what the player at the net should do, what the baseline player will do, and the overall strategy for the point.

#1 – Where The Serve/Return Will Go

The player who is serving will usually say whether he is going to serve to the opponent’s forehand, backhand, or body, and in some cases he might include the type of spin he will add to the serve (slice, topspin or flat).

On the other hand, if the player is about to return a serve, he will mention whether he will try to hit the return at the opponent at the net, hit a lob, or hit the ball at the baseline opponent.

The reason why players communicate about this is so that their partner can be better prepared for the next shot. Once you play enough doubles, you realize that hitting the ball at specific places will generally result in similar subsequent shots. For instance, hitting serves more towards the center of the court will generally result in the next shot coming towards the middle of the court. So by communicating the location of the serve or return, players hope to give their partners an edge against their opponents.

The second most commonly whispered topic is where the net player should position himself and where he should go afterward the serve or return. This is part of the team’s strategy, and is one of the most important aspects of the doubles game.

There are several different ways a team can position itself when serving: one player on each side, both players at the baseline, the net player at the center of the court (“I” formation), and both players standing on the same side (Australian formation).

These formations are used to explore the team’s strengths and the opponents’ weaknesses. Needless to say, it’s very important that players communicate these strategies before the points begin – otherwise chances are that the players will end up bumping into each other.

#3 – Where The Baseline Player Will Go

If the players choose a different formation (I or Australian), then the players will need to decide who will take each side of the court after the first shot is hit.

This is usually used by slightly more advanced players, as beginners are usually not as aware of the game in order to plan that far in advance.

The fourth and final topic discussed by tennis players through whispers is the overall strategy of the team. These are more high-level comments that address the overall moment of the game.

Maybe a player notices one of their opponents is struggling with a certain shot, and they whisper a new strategy to each other. Maybe they need to slow down the game and hit a few more lobs, so they communicate and change the strategy with the intent of taking control of the match.

Understanding doubles strategy is the key to becoming a great tennis player, and it is a huge differentiator. Players are extra secretive when discussing strategy, as accidentally “spilling the beans” to their opponents could cost them the match.

If you’re new to tennis and all the whispering that happens in a doubles match seems strange to you – I get it. It just seems like a whole lot of effort to do that before every point, and it would be much easier to just shout it out loud.

However, these few whispering seconds are the best opportunity players have to communicate with each other and change the course of the game. They’re the equivalent to a basketball or football timeout – when the coach wants to regroup and set the tone for the game moving forward.