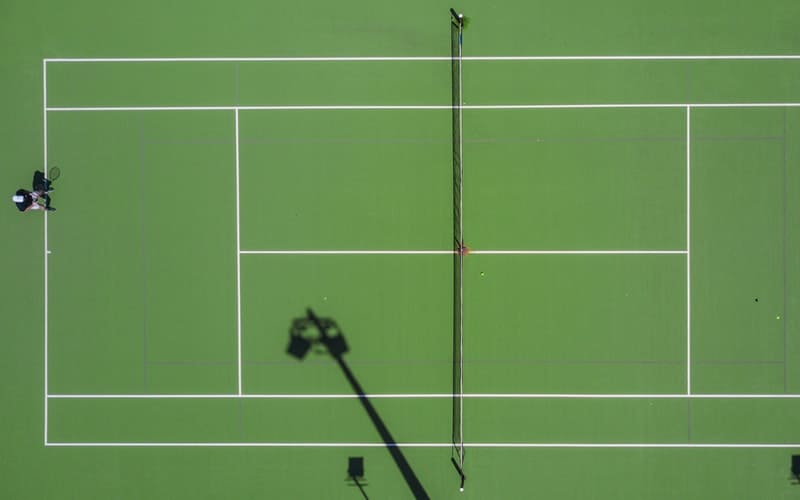 The first time you see a tennis court, you will probably wonder why it has so many lines on it. If you understand the basics of the game, you will expect to see a rectangle that marks out the area into which the ball needs to be struck and a net across the middle of it, but what are all of the other lines about?

Historically, the court was not always even rectangular. The first accepted court for lawn tennis was designed by Walter Wingfield in 1874 and was hourglass shape with a net somewhere between 5 and 7 feet high. By 1877, the All England Club had implemented a rectangular court design in preparation for the first Wimbledon Championships, although the net was still 5 feet high, and some of the ‘boxes’ were larger than they are today. In 1882, the net was reduced to 3 feet high, lines similar to those used today were implemented, and the court has remained virtually unchanged since. This design has certainly stood the test of time, but what do all of these lines mean?

The lines on a tennis court define the area where the ball is allowed to land during the point. The baseline is the line that represents the furthest back a ball can land; the singles and doubles sidelines mark the outer edge along the side of the court; finally, the service box indicates where a serve has to land.

As you actually see from the above diagram, there is a baseline at each end of a tennis court. For a standard court with both singles and doubles markings, each baseline will be 36 feet long. The baselines are sometimes the same thickness as the rest of the lines on the court, but they are allowed to be thicker. Most of the lines are 1 to 2 inches wide, but the baselines can be up to 4 inches across.

There is a small line called the center mark at the mid-point of each baseline, and this is used when a player is serving, as they are required to serve diagonally across the court and must stand on the correct side to do so.

These are not labeled on the above diagram, but they are the outermost lines on the sides of the court, running parallel to the singles sidelines. The doubles sidelines mark the limits of the court for a game of doubles. The court is extended to reflect the presence of two additional players.

During a game of doubles, the singles sidelines can be ignored except when serving, as the service box is the only part of the court which is not made wider. The gap between the singles and doubles sidelines is 4 feet 6 inches.

The service boxes are the areas between the net and the service lines. Their edges are defined by the singles sidelines, and they are separated into left and right boxes by the centre service line. There are, therefore, as you will see on the diagram, four service boxes, two on either side of the net. Each box is 21 feet long and 13 feet 6 inches wide. When serving, a player has to stand behind the baseline and hit the ball, so it lands in the service box diagonally opposite the side of the court they are standing in. If it does not land in the correct box, it is a ‘fault.’

Are Lines Considered ‘In’ In Tennis?

If a tennis ball touches any part of the relevant line on its first bounce, it is said to be ‘in,’ and the rally continues. This can, of course, lead to disputes, as players often have differing opinions as to whether the ball might have grazed the edge of the line in question.

It is tempting for a player to take part in a match without an umpire to call an opponent’s shot out when they are not 100% sure. This happens at all levels, with accidental errors being common and deliberate ones not unheard of. Umpires and line judges can also make errors which can be equally frustrating for the players.

At the highest level, technology is taking over, with systems like ‘Hawkeye’ and ‘Hawkeye Live’ dealing with the close calls and removing any opportunity to dispute the outcome.

The lines on a tennis court will seem confusing at first, but once you have been playing the game for quite a while, you will not be able to envisage any other design. Nonetheless, they may change again, one day, for example, if the governing bodies decided to limit the dominance of the serve by making the service boxes smaller. The cost of changing every court in the world would mean that any such change would not be made lightly, however, so the current design is likely to be around for some time.