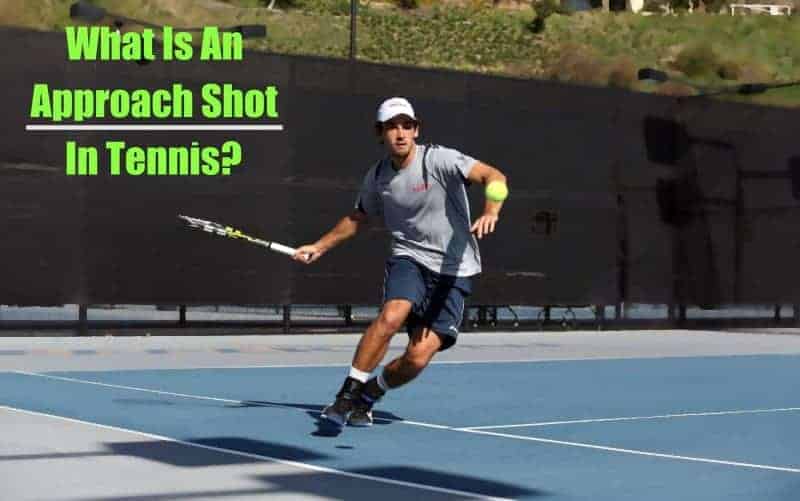 If you’re just getting introduced to tennis, there is an overwhelming number of new terms you will need to learn. Forehands, backhands, serves, double faults, drop shots, overheads, slices, and much more. While you can technically play tennis without knowing what these terms mean, your development will most likely be slower as you won’t really understand what you are doing.

We have covered the most basic terms in another article, and you can check it here. There, you will find definitions for the 8 basic tennis shots – forehand, backhand, slice, serve, return, forehand volley, backhand volley, and overhead. If you don’t know what each one of those means, I suggest you go take a look at that article. However, if you have a pretty good idea of their meaning and you want to learn a more advanced term, here we will cover in-depth what a tennis approach shot is.

Basically, what is an approach shot in tennis? The tennis approach shot is used to transition from the baseline up to the net, and it can be executed either with a player’s backhand or forehand. Mainly a player approaches the net on a ball that lands around the service line or shorter, or if they recognize that their opponent is out of position and is likely to provide a weak ball as a result.

A player can hit an approach shot as a winner, but it’s frequently used a setup shot in that the player isn’t looking to win the point on this shot. Alternatively, they’re attempting to force a defensive ball from their opponent which afterward can be put away with a volley to win the point.

For example, you hit a fast pace forehand crosscourt and you see that your opponent is barely going to get their racquet on the ball, their arm is fully extending reaching for the ball, you decide to take advantage by moving forward to the net to make a play on the ball resulting in your opponent not having enough time to recover and make a play on your easy volley. You win the point easily.

Below, we’ve covered a few of the most common questions when hitting an approach shot:

Is Hitting An Approach Shot Too Soon a Good Idea?

Many players will frequently attempt to hit an approach off a ball that was hit too well by their opponent. Approaching the net too soon often occurs because a player is overly eager. For instance, consider a point where your opponent hits a clean groundstroke that lands relatively deep in the court. If you try to move forward and hit an approach shot, then you may not be able to transition to the net quickly enough. The result can open up a variety of angles for your opponent to easily pass you.

Is Closing Too Close To The Net a Better Strategy?

Overly eager players may execute a great approach shot but finally, getting too close to the net – which makes them an easy target for their opponent to lob them. It’s a delicate balance. You don’t want to move forward too far because of the lob, but if you don’t close enough, you’re going to open yourself up to a passing shot.

Does Not Doing Enough With The Approach Make A Player Lose The Game?

When you move in for an approach shot, it’s important to strike the ball with confidence and perfectly, keeping the ball deep in the court. That’s partially the reason why you don’t want to approach too soon. Alternatively, you want to wait for a perfect ball that allows you to move forward with an aggressive shot which forces your opponent to play defense and sets up your volley.

Where Should An Approach Shot Be Hit In Tennis?

Here are some approach shot strategies to practice and master with:

The approach shot is one of the most exciting shots in tennis and it all starts with the feet, Like on other shots you want to time your split step to make contact with the ground at the exact moment you realize where the ball is headed.

Once you recognize the ball is short you want to start running forward while you assess exactly where you expect the ball to land. Once you have assessed where the ball will land you want to run up at an angle to the ball so that when you begin to set up for your forehand or backhand you have enough room between you and the ball.

It is common for players to run into the ball and as a result, to hop up on their stroke or their shoulders rise up as the body attempts to create more space. If this happens to you, we recommend that you try this tip: once you turn to set up for the ball, begin moving your feet by making small shuffle adjustment steps around and away from the ball. This allows for several little steps to be taken to ensure you find the proper distance on the approach shot.

The approach shot is unique in the sense that you can utilize any stroke in the game and choose to approach the net afterward, For example, some players pick up on their opponent’s movements and if a player allows balls to drop rather than taking the ball on the rise they may choose to throw up a topspin lob and approach the net giving them plenty of time to react to the next ball. Or a player may notice their opponent has difficulty moving forward and chip the ball short and take the net – the possibilities are endless. For the purpose of this post, we will look at the approach in terms of the forehand and backhand.

The approach shot is most effective when the ball is taken on the rise and hit from waist to chest height. Moving forward to play a short ball can benefit you in many ways and help you win matches more quickly, so you should definitely work on your approach shot technique and execution.