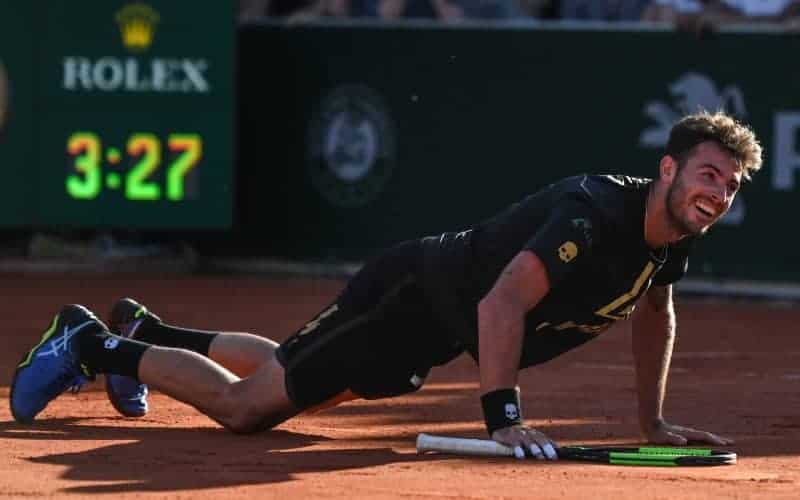 One of the reasons tennis can be such a great sport to watch is its sheer unpredictability. A match that was expected to end quickly can turn into an epic, but an apparently evenly-balanced match can end rapidly. Tennis players are not machines, and even the best have bad days. For this reason, there is no easy answer to the question of how long tennis matches last. There are also a number of different formats, with many being decided over the best of three sets with a tie-break in each if necessary, but men’s grand slam matches, for example, extend to the best of five sets, sometimes with no tie-break in the final set.

The quickest, most one-sided, best of three set match could be decided by two rapid 6-0 sets in around 30 minutes. A set which goes to a tie-break typically takes around an hour, so a close best of three set match will take over three hours. Best of five set matches can end in less than an hour, but five long sets can take five to six hours, emphasising the physical challenge offered by a men’s grand slam event.

The Average Duration of a Tennis Set

There are published mathematical studies that estimate the length of a tennis game under different circumstances, which could be extrapolated to derive the expected length of a set. If numbers and formulae interest you, there is a 2017 paper by Ferrante, Pontarollo, and Fonseca covering this topic. For those of us without a degree in mathematics, it has been shown that a typical tennis set takes just over 40 minutes on average.

This does, however, vary according to the court’s surface. For example, due to the shorter rallies encouraged by the quick grass courts, a typical set at Wimbledon tends to take a little under 40 minutes. On the other hand, slow clay courts produce longer rallies, so an average set at the French Open takes significantly over 40 minutes. These numbers are of course simply averages, and in practice, a set can take as little as 15 minutes or extend to well over an hour.

When a match is decided over the best of three sets, it can be won in two sets if the same player wins both, or in three sets if the first two sets are shared.

Two rapid sets will take about 30 minutes, whereas two close ones will take over 2 hours. If we use the average time per set of 40 minutes, we can expect a match which is decided in two sets to last around 1 hour 20 minutes. If the first two sets are shared and a third is necessary, the average 40-minute set length suggests that the match will typically last around 2 hours.

If, however, all three sets are close, possibly being decided by a tie-break, it is very likely that the match will take more than 3 hours. If both players are very cautious, matches can take a good deal longer than this. In 1984, Vicki Nelson and Jean Hepner managed to make their match last 6 hours and 31 minutes, despite Nelson winning in two sets!

A best-of-five-set match can be resolved in three, four, or five sets. If we assume that each set takes 40 minutes, this suggests that most matches will take somewhere between 2 hours and 3 hours 20 minutes. Of course, they can progress more quickly- some one-sided matches have been completed inside an hour- but equally there have been a number of epic encounters taking 5 hours or more.

There was one match, however, which took much longer than any other. At Wimbledon in 2010, John Isner defeated Nicolas Mahut 6–4, 3–6, 6–7, 7–6, 70–68 in a match which extended to an incredible 11 hours and 5 minutes of playing time, taking place over three separate days. The reason for the prodigious length of this contest was the fact that both players were better at serving than returning, and both were serving particularly well during the almost interminable fifth set. They found it incredibly difficult to break serve, especially as they became increasingly tired. Wimbledon recently introduced a tie-break at 12-12 in the fifth set, preventing anything like this from ever happening again.

The most epic tennis matches were played in a best-of-five format, and some of them went to great lengths. We’ve written a cool guide on the Top 10 Longest Tennis Matches Ever, which includes videos with highlights of those matches, and you can check it out here.

NCAA matches begin with a round of doubles matches, all played over a single set. In all NCAA matches there are no ‘lets’ and sudden death deuces are played. This makes the sets a little quicker than professional matches, so the doubles round is likely to take 30-45 minutes. Once this is complete, six singles matches will begin. These are played over the best of three sets, but the final set is a 10-point tie-break.

With the special NCAA rules, it is probable that the singles round will be completed within 2 hours, and the match as a whole will take 2-3 hours. It is very unlikely that a college tennis matches will last significantly longer than 3 hours.

There is no universally adopted format for US high school tennis matches, but they will often begin with a boys/girls doubles round, followed by a mixed doubles and then singles matches. The no-ad scoring system is not used, so there is much more variability in match length than there is in the NCAA.

In some states, high school tennis matches can last over four hours, and in Texas, where matches can incorporate 19 individual contests, 6 hours or more is not unheard of. Not surprisingly, discussions periodically take place as to how matches might be shortened.

Tennis matches can vary in length enormously. Some people feel that they should be prevented from taking too long, but, for the aficionado, the longest matches are often the most dramatic and memorable.