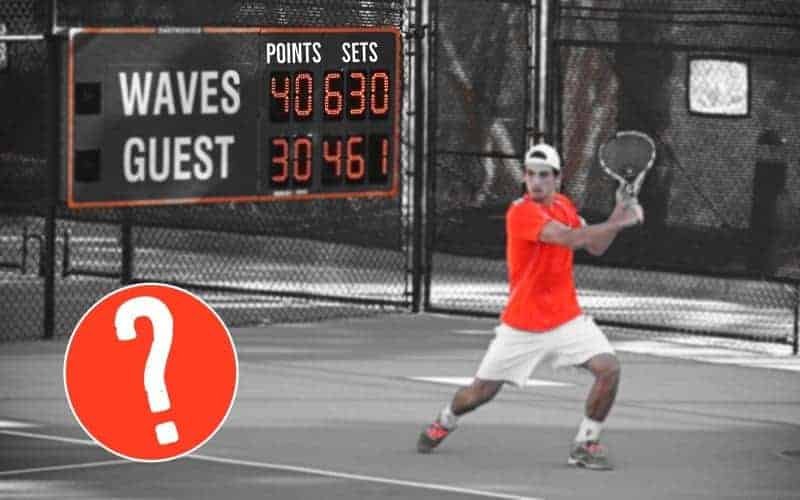 Whether you’re a tennis fan or a tennis player, it is necessary that you know how many sets are played in a tennis match. While tennis can seem like a complicated sport at first, once you get the hang of it it’s quite simple.

There are several reasons why the rules vary depending on the event being played, which might include limitations in the numbers of courts available, the stamina of the players, and even television rights.

On top of the regular scoring methods mentioned above, there are more “modern” scoring systems that have been adopted more and more frequently. In this easy-guide, we’ll break them all down for you.

Just before we get started – we’re starting from the premise that you understand how the basics of the tennis scoring system works. If you could use a little refreshing on the difference between points, games, sets, and matches, you can check out our Ultimate Guide on the Tennis Scoring System. We put a lot of effort into it, and it’s extremely helpful regardless of your level.

If you’re already familiar with how the scoring works, let’s get to it.

Men’s tennis matches have historically been played with more sets than women’s, but more recently tennis events have made a push to adopt similar match formats for both men and women.

Most professional men’s tennis matches are played in a best-of-three sets format, with 6 games (and a possible tiebreak) in each set. In Grand Slams (Australian Open, French Open, Wimbledon, and US Open), men play best-of-five sets, which means that players need to win 3 sets to win the match.

Women’s tennis matches are virtually all played in best-of-three formats, even in Grand Slam tournaments such as the Australian Open, French Open, Wimbledon, and US Open. There are also 6 games and a possible tiebreak in each set.

Grand Slams are the most admired and expected tennis events in the world. There are only 4 Grand Slam tournaments per year – the Australian Open, the French Open, Wimbledon, and the U.S. Open. Only the best tennis players in the world qualify for these events.

The Grand Slam tournaments are one of the few large tennis tournaments which are not organized by the ATP or the WTA, but by the International Tennis Federation. As such, they can kind of make up their own rules.

Since more sets are played at these events, matches can go on for a really, really long time. The majority of the Top 10 Longest Tennis Matches Ever were played in Grand Slam events. This may seem like a lie, but one of them was played for longer than 11 hours.

A “tour event” is any tournament that is smaller than Grand Slams but bigger than the Futures and Challenger Tour events (see below). These events vary in size, but they are usually played by players ranked between 1 and 250 in the world.

Both men and women play 2 out of 3 sets at tour events regardless of whether it is qualifying or main draw match.

In such events, the 3rd set is always played with a tiebreak in case players tie at 6 games to 6. In the past, the finals of ATP 1000 events used to be played as 3 out of 5 sets, but the increasingly demanding calendar of players forced the ATP to change how many sets were played in finals.

Future and challenger tournaments are the starting point for every aspiring professional tennis player. They are much less glamorous than Grand Slams and Tour Events, and they pay significantly less.

In Future and Challenger tennis singles matches, both men and women play 2 out of 3 sets in the main draw.

For future tournaments, the men’s and women’s qualifying draws play 2 out of 3 sets with a 10-point tiebreak in lieu of a third set. This is a new rule that was put into place in 2019 in order to shorten matches for players in qualifying.

The reason why qualifying matches are shorter than main draw matches is to not excessively tire players who qualify to the main draw.

Doubles events get significantly less attention from tennis fans, and they are played in a shorter format in order to maximize television revenue. The matches are usually very dynamic and fun to watch.

In doubles, most Grand Slam matches on the men’s and women’s sides are played as 2 out of 3 full sets (up to 6 with a tiebreak). In Wimbledon, the men’s doubles draw matches plays 3 out of 5 sets.

In tour events, both men and women doubles events are played as 2 out of 3 sets with a match tiebreak (up to 10-points) in lieu of the third set.

While there are only 4 Grand Slams per year, there are several different tour events spread across the world throughout the year. Tournament organizers always benefit from having the famous singles players joining in the doubles events; they usually draw larger crowds, which means more revenue.

The same goes for futures and challengers. Both men and women play 2 out of 3 sets with a match tiebreak for the third set.

In these smaller tournaments, most of the players are competing in both the singles and doubles matches. It would be unrealistic to have players compete in so many matches with a 2 out of 3 full sets format – hence why the 10-point tiebreak format was adopted.

While the match formats mentioned above are the main set formats adopted by professional tennis tournaments, there are several different set formats for amateurs that play tournaments. Below are some of the ones that you may see in your next tournament.

This will be the most used format for a tournament at any level. These are 6 game sets, with a tiebreak being played if the players tie at 6 games to 6. If the opponents split the first two sets, a third set will be played to decide the match.

This format is the same as the one used in most of the professional tournaments, but it can be quite grueling for players who are not used to it.

2 out of 3 sets with a Match Tiebreak

This format is similar to the previous, but a 10 point match tiebreaker is played to decide the match when players are tied at 1 set to 1. This format is used to shorten matches to preserve player energy and ensure that the tournament is finished in a timely manner.

Just to keep it in perspective, a full set usually lasts between 45 minutes and 1 hour, while a 10-point tiebreaker is usually not longer than 15 minutes.

An 8 game pro set is typically used when players are expected to compete in several matches on the same day. This format is played the same as a 6 game set, but up to 8 games instead. If players tie at 7 games to 7, the set is extended to 9. If players tie again at 8 games to 8, a tiebreak is played.

This format is relatively new, and it’s been adopted in a few professional tournaments (NextGen Finals). These sets are shorter than what you’re used to playing, as they only go to 4 games. If players tie at 3 games to 3, a 5-point tiebreak is played. Since the shorts are much quicker, players usually play as a 3 out of 5 match.

This format was created with the intent of making the game more dynamic and easier for non-tennis fans to watch on TV.

Hopefully this article was able to better inform you on how many sets are played in tennis. For more information on rules and how these sets are played, you can check our massive guide on the Tennis Scoring Rules – The Ultimate Guide. There, you will find everything you need to know about the scoring in tennis.

And if you do have any questions about how the scoring format works (or any question in general) you can just let us know in the comment section below and we’ll get to it ASAP!