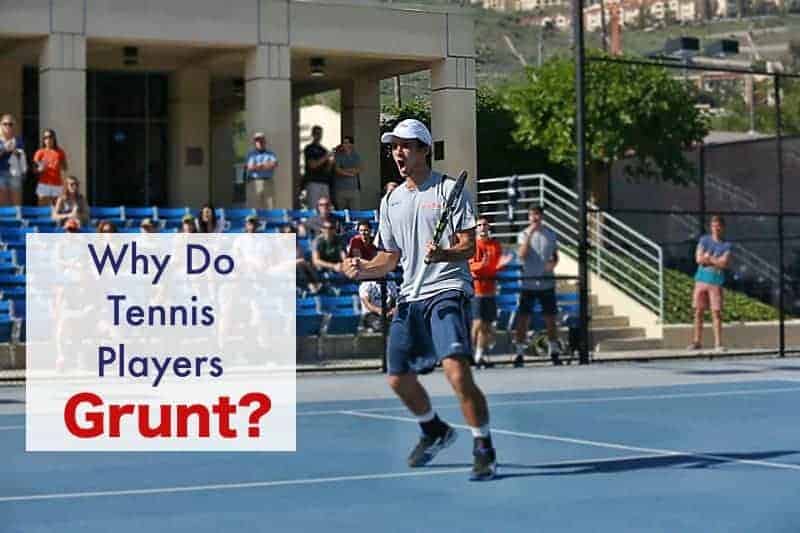 If you ever watched a tennis match played by Maria Sharapova, Serena Williams, or Rafael Nadal, you certainly asked yourself: “What’s up with all the grunting?” You’ll see players who will not make a single noise throughout a 4-hour match, and then you’ll see the players who scream loud enough to wake up an entire small village. That just doesn’t seem fair, right?

Tennis is a sport known for its elegance and sportsmanship, and grunting is generally not considered to be very elegant. So it is only normal that tennis fans (who have never played the sport) would ask why professional players would choose to grunt. At the end of the day, you would think that grunting could even harm a player’s image for fans, other players, and even sponsors.

Tennis players grunt because it helps them concentrate, breathe, and increase their intensity. Grunting can be beneficial to every tennis player, as it is scientifically proven to increase shot velocity by roughly 5%.

Some players have been so used to grunting for so long that they already see grunting as a part of their on-court identity. Below you can see a video of Maria Sharapova’s history of grunting for 15 years.

As Maria puts it: “Either you do it or you don’t.” Below we wanted to cover some of the benefits and drawbacks of grunting in tennis, so hopefully, you will have a better understanding. And if you are a player yourself, you can then make a decision of whether grunting will help your game get a little further.

What Are The Benefits Of Grunting?

Professional tennis players choose to grunt for several different reasons. Some players grunt because it helps them to maintain their concentration, others do so to keep their intensity up, and some do so as a way to regulate their breathing. Personally, I always felt like grunting helped me to reach my “zone” – the level of intensity I needed in order to play my best. I always found that, without grunting, I would become too passive on court and unmotivated. So somedays, when I wasn’t feeling particularly motivated, I had to mechanically start grunting in order to bring my energy level up.

You will notice that some players have incorporated grunting into their games (just like bouncing the ball before serving) and their game would most certainly be off if they suddenly couldn’t grunt anymore. Other players only end up grunting after a match has been going on for a few hours, as their bodies begin to get tired and grunting emerges as a way to continue playing at a high intensity. Lastly, some players will not grunt even if their lives depended on it; they find it a waste of energy and sometimes even embarrassing.

The Science Of Grunting In Tennis

Tennis is not the only sport in which you will find athletes grunting. It is very common to see Olympic weightlifters shouting some primal screams as they attempt to break their own records. The belief is that grunting can help to increase power and velocity in sports that require short bursts of energy and movement.

In an attempt to prove whether that was true, a 2014 study conducted in Texas measured the effects that grunting had on collegiate tennis players. The team conducting the study selected 32 athletes from NCAA Divisions II and III – 17 of them without a history of grunting and 15 with one. The study measured velocity, force, and peak muscle activity during serves and forehands by using a radar gun and sensors.

While grunting in tennis is seen by many is beneficial and strategic, several people have voiced their opposition to it. In 2009, Martina Navratilova (a tennis legend) said that tennis was the equivalent of cheating, as it is nothing more than a way to distract your opponent. Other current and former players like Caroline Wozniacki and Todd Woodbridge have publicly criticized players who grunt and said that the main professional tennis associations should do something about it.

While the volume of players’ grunting is not something that is regularly measured, it has been done on a few occasions in the past. Maria Sharapova is believed to have the loudest grunt on the circuit, measured at 101 decibels. Just as a reference, a regular conversation usually produces 60 decibels. A regular car driving at 60mph will produce 70. A garbage disposal or an average factory will produce 80. A motorcycle that is 10 meters away from you will product 90. A jet take-off will product 100. And once again, Maria Sharapova is capable of grunting at 101 decibels. Impressive.

Below you can watch a sample from one of Sabalenka’s matches.

Is Grunting Banned In Tennis?

While there have been complaints against grunting for years, a tennis grunting ban has never been approved. While such regulations would be sure to find several supporters, they would also harm players that have incorporated grunting into their games. The WTA has considered establishing a “grunting limit”, but nothing has been banned so far.

link to The Top 10 Best Tennis Academies In Florida

Florida boasts warm weather all year round, which makes it an ideal location for tennis. As a result, it boasts a number of excellent academies. There are 11 key features that the best academies...

If you are a young tennis player with ambitions of getting to the top or the parent of a promising junior, you are probably looking for a tennis academy that can help move you or your child to the...