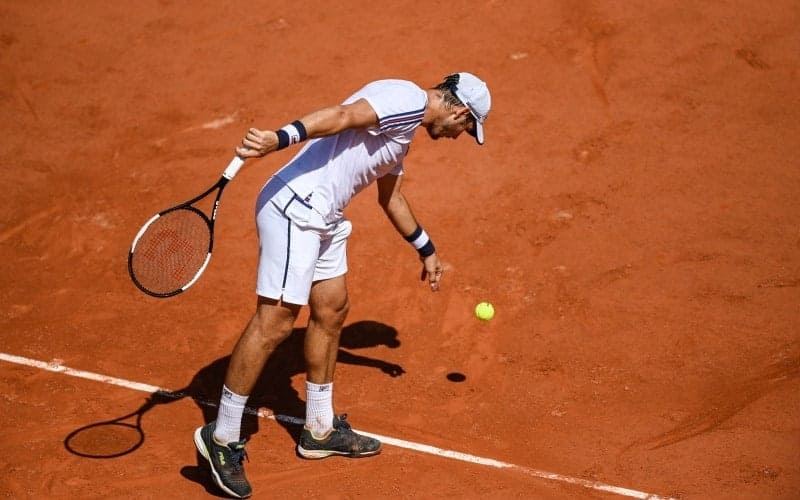 While beginners might just bounce the ball because they have seen a pro doing it on TV, there is a lot that goes behind those few (sometimes many) bounces. If used correctly, the second before a tennis point can be key to having a consistent game and winning more matches, and we’ll show you ways to do that below.

Developing A Tactic For The Point

One of the most important ways to use the time bouncing balls before serving is to develop a tactic (or strategy) for the point that is about to follow. In professional matches, those are the few seconds when the whole stadium is usually silent, which makes concentrating easier for the players.

Developing a tactic for the next point can be as simple as deciding where to aim your serve and where to hit the second shot, but usually there is a lot more to pay attention to. These are some of the things I personally pay attention to before developing a tactic for the next point (which happens in the few seconds I’m bouncing the ball before my serves):

After analyzing all of these factors, I decide on a game plan for the next point. For instance, I might realize that my opponent is playing against the wind, that he might be feeling nervous – which is causing him to hit short balls – and that he has been missing a few backhands. If so, I’ll decide to hit a high kick serve to his backhand, which would most likely result in a short return, then I’d hit a forehand back to his backhand, approach the net, and hit a volley on the other side.

Focusing On The Serve Technique

Another benefit of bouncing the ball before the serve is that it helps players to focus on their serve technique. Needless to say, the serve is one of the (if not THE) most important shot of a player’s game, and therefore needs to be executed as perfectly as possible.

The difference between a tennis serve and the other shots is that the serve is the only shot in which the players have full control of the shot. In all other shots, the ball will be moving and the player will need to adjust to several factors like ball speed, height, distance, and spin. For the serve, the player has the ball in his or her hand and does not need to adjust, which translates into a lot more control over the shot.

When you’re hitting hundreds of serves every day, you learn how to optimize your serve and then build a habit on that certain technique. Usually this technique involves several “micro-steps” that can be easily repeated in order to hit a great serve every point.

Bouncing the ball before the serve allows players to kickstart their serving routine. I’ll bounce the ball between 4 to 6 times, then join both hands in front of my body, raise my right arm, toss the ball, and finally jump to make contact with the shot. This all becomes automated at a certain point, but bouncing the ball can be crucial to having a good routine.

Breathing and Relaxing Before The Next Point

Lastly, spending a few seconds bouncing the ball before the serve can give the player a great opportunity to breathe and relax before the point. In modern professional tennis, players only have a 25-second break between each point, and if they go over they get punished for it. Within those 25 seconds, they need to: use their towel to dry their hands, choose the balls they’re going to use for the next point, go back to the baseline, and get ready for the point. That’s a lot for 25 seconds, especially if you just ran side to side for over a minute.

The good thing about bouncing the ball is that it is considered to be part of your serve motion, which means that it does not count as part of those 25 seconds. So any time you spend breathing while bouncing the ball is ON TOP of the other 25 seconds. When you’re playing a difficult match and you’re having to run a lot, having a few extra seconds to breathe can be invaluable.

If you begin paying attention, professional players will usually spend more time bouncing the ball after they play a long, hard-fought point. This happens because they’re spending some extra time getting their breathing back to normal.

How Many Times Can You Bounce The Ball?

While there’s technically not a limit to the number of times tennis players can bounce the ball before serving, most players do so between 4 to 8 times before each serve. In the higher end of the spectrum are players like Novak Djokovic, who commonly bounces the ball over 15 times before important points. Doing so can be considered a little obnoxious by other players and fans.

If you watch the video above, you can see a fan yells at Djokovic to “STOP IT!” – referring to the ball bouncing. Personally I can relate to him – it can be frustrating to watch a match in which a player is bouncing the ball 15 times before each point. Life’s too short for that.