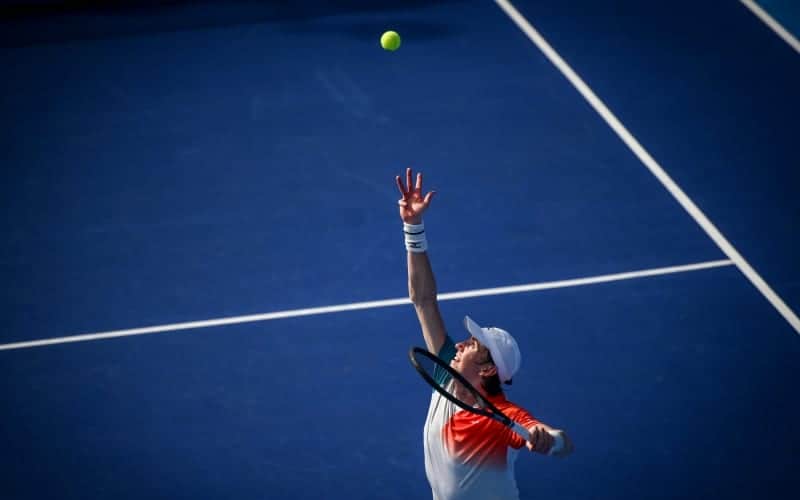 Tennis is a sport with a lot of rules, and those can be somewhat intimidating if you’re just learning how to play the game. There are rules related to the court dimensions, the scoring system, where you should hit the ball, and how the points work. And even if you learn all of the details, you can’t really start playing a match until you learn who should be serving first.

So how do you determine who serves first in a tennis match? In general, there are several ways to do so, including coin tosses, racket spins, and even rock-paper-scissors. The coin toss is the traditional method used in professional tournaments to determine who serves first, while the racket spin is the most popular among club players. Once the winner of the “game” is defined, he or she can choose whether to serve or return first.

Below we will get a little more in-depth into how to go about the methods mentioned above and what are the advantages and disadvantages of serving or returning first.

How To Decide Who Serves First

There is no such rule that establishes who serves first in a tennis match. In professional tournaments, the umpire performs a coin toss, and the winner of the coin toss decides if he or she wants to serve or receive first. However, in club matches or if you’re just playing with a buddy, there are several ways you can decide who serves first.

The most common way to determine who serves first is the racket spin. Each racket has some sort of logo, letter, or drawing in the bottom of its grip, which will be different depending on the racket’s brand. You can see the logos for the 4 most popular racket brands (Babolat, Head, Wilson, and Yonex) in the image below.

The most common method to decide who serves first in professional matches is the coin toss. Usually performed by the umpire, the coin toss is usually done with both players standing at the net. One of the players picks either heads or tails, and the winner of the coin toss decides whether he wants to serve, receive, or defer.

Finally, the fourth and final way to decide who serves first is to let the oldest player decide. This is considered to be the least fair method of all of them, but it can be done if a player wishes to pay respect to an older player.

After both players go through the coin toss, racquet spin, or rock-paper-scissor game, the winner of the “duel” needs to decide whether he or she wants to serve, receive, or defer to the other player. Players also have a fourth option, which is to choose the side of the court they want to start the match on.

This ends up being a matter of personal preference: some players see an advantage on serving first, others prefer to return, and some others want to see what the other player will choose. We will discuss the advantage of each one later.

Once the winner of the “duel” makes the first choice, the opponent can make their own choice. So for instance, if Player A wins the coin toss and chooses to start serving, Player B can choose which side of the court he or she wants to start on. Alternatively, if Player A chooses a side, Player B can choose whether he or she wants to serve or receive. Once the match starts, players will take turns serving after each game ends.

Who Serves First In A Tiebreak

If players end up tying at 6 games to 6, they need to play a tiebreak – which is a type of special game designed to break a tie. During a tiebreak, the serving rotation works differently than other games. One player serves for the first point, then players serve for two points each until the set is done.

Due to this different serving rotation, players can become confused as to who should serve first during a tiebreak. The rules are actually pretty straight forward though, as the turns should just continue their normal order. So if Player A served during the last game before the tiebreak, player B will serve for the first point of the tiebreak.

Who Serves First In The Second Set

Similarly, it can be confusing to determine who serves first in the second set. If the previous set ended in any score other than 7×6, the players should just continue the normal order – so if player A served in the last game of the first set, player B should start the second set serving.

What Are The Benefits Of Serving First?

While it may seem like a fairly trivial decision, choosing whether to serve or receive first may dictate the outcome of the match. Choosing to serve or receive is mostly a matter of personal preference, but players can make that decision based on their strategy against different opponents.

Choosing to serve first in a tennis match has the benefit of establishing a larger advantage in case you can break your opponent’s serve. If you are able to hold your serve, break your opponent’s, and hold your serve, you will have a 3-game advantage – 3×0, 4×1, 5×2, or 6×3. If you choose to return first, on the other hand, you will only have a 2-game advantage. If you are playing a mentally weaker player or if you like the feeling of having a big perceptional advantage, choosing to serve first will help you get that.

Choosing to return first, on the other hand, may be beneficial if you tend to start the game slow or if you think your opponent usually starts the game slowly. If you start the game slowly, returning first will give you the opportunity to play a whole game before getting to your service game, which will help you get into a nice rhythm. If you think your opponent starts the game off slow, returning first will give you a good opportunity to break their serve right off the bat.

Finally, you may want to choose to defer, which will allow your opponent to decide what he or she wants to do first. You may find a benefit in doing that if one of the sides of the court has a lot of sun or wind against it. If you choose to defer, you can wait until your opponent decides whether he or she wants to serve or return, and then you can choose your side accordingly. By doing so, you can make sure you won’t start the match serving against the sun, which could otherwise result in you having your service broken right at the start.