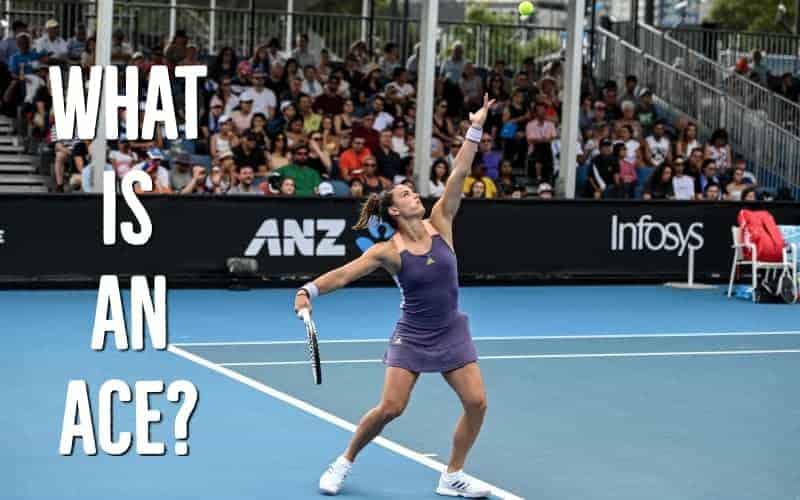 Tennis is unusual among racket sports in that the serve can be a major attacking weapon. Players serve by tossing the ball above their head and striking it with their racket. They use a throwing action to make the racket move very quickly and can produce considerable pace and spin. The fastest serves have been measured at over 150 miles per hour.

Tall players are often particularly adept at serving, as their height allows them a better angle to hit the ball over the net, at speed, into various parts of the target area, known as the ‘service box’. With modern rackets, the best servers can win a lot of points simply by hitting a good serve, which some purists, who prefer long rallies, dislike. Others of us admire the skill that goes into top-class serving, and find a great serving performance just as entertaining as a player running around the baseline hitting winners.

If a serve lands in the service box and the returner is unable to touch it with their racket, it is called an ‘ace’. This wins the point for the server. An ace does not have to be fast: spin and deception can also defeat the returner. Nonetheless, harder serves are more likely to produce aces, as the opponent has less time to react.

The Definition Of An Ace In Tennis

A serve must be struck from behind the baseline and must land in the service box diagonally opposite without touching the net. If the ball bounces for a second time without the receiver touching it with their racket, the server wins the point and the serve is called an ace.

Why Is It Called An Ace?

As ever with words that have been in use for a long time, the root of the term ‘ace’ is not entirely clear. The most likely explanation is the fact that the ace is the most valuable and powerful card in a deck of playing cards, and it hence carries an implication of excellence.

It has also been suggested that there is a link to the terminology used in World War I. Fighter Pilots were categorized as ‘aces’ if they were successful in shooting down a number of enemy planes, and there could be argued to be a link to the firing in of winning serves. The playing card analogy sounds the most plausible.

How Do Players Hit Aces?

The players who hit the most aces tend to be those who can hit the ball hard at a wide range of angles. If they can disguise the direction in which they plan to hit the ball, many of their serves will be very difficult to return.

Spin can also be a big factor in producing aces, as a serve that is hit to the side of the box can be made to move further away from the receiver using slice, rendering it very difficult to reach.

Pure deception can occasionally work too. If a receiver is expecting a powerful, high-bouncing serve, they might stand a long way back in preparation. A clever server might occasionally play a disguised underarm serve, in the form of a drop-shot, instead. If this bounces twice before the unsuspecting returner can reach it, this too will be categorized as an ace.

Can You Hit An Ace With A Second Serve?

Traditionally, players tend to be a little more cautious with their second serve, as, if they miss it, they lose the point. Nonetheless, champions of the past like Ivanisevic and Becker tended to hit their second serve in a fairly similar manner to their first, earning a lot of aces (as well as a few double faults!).

In general, today’s players tend to try to hit a solid second serve that is difficult to attack rather than going for a winner. Despite this, from time to time, many will go for more pace and different placement in the hope of hitting an ace. Although he is not renowned as a great server, Novak Djokovic put this tactic to good use in 2019, earning 58 second serve aces, more than anyone else in the top 10.

The great servers are often very tall, which means that men have an advantage over women in this area. Most serving records are held by men who are well over six feet in height. The greatest server of all time is the colossal Croatian Ivo Karlovic. At the time of writing, Ivo has served more than 13,600 aces in his career. In second place is almost equally tall American John Isner, with in excess of 12,300. The legendary Roger Federer sits in third place with over 11,300, although his total comes from more than twice as many matches as the two giants ahead of him.

Aces are most commonly served on the fastest courts, which are normally grass. Isner has recorded the highest number of aces in a tournament with 214 at Wimbledon 2018. He has also achieved the greatest number of aces in a single match with 113 in his incredible contest with Nicolas Mahut at Wimbledon 2010, which ended 70-68 in the fifth set. This latter achievement will probably never be equalled, as Wimbledon’s rules have since been changed to prevent matches of this length.

Goran Ivanisevic served 1,477 aces in 1996, which remains the highest total for a season. Goran was at the very top of the game then, so he was helped by playing a large number of matches, but it is still an impressive score. Sam Querrey, another very tall man, holds the record for the most consecutive aces with 10 at Indianapolis in 2007.

The serve in tennis is an underrated part of the game. It can be smooth and elegant, or fierce and brutal. The great servers deserve as much credit as those with stylish forehands or beautiful backhands. The aces they serve are a statistical reminder of the skill they bring to the sport.