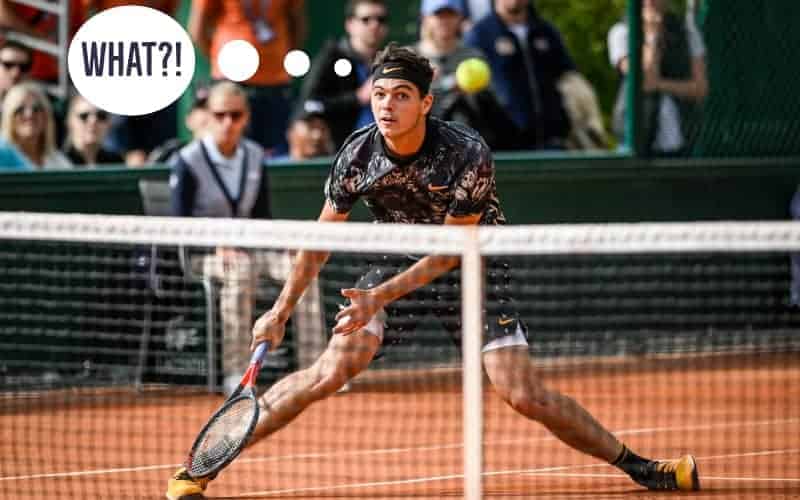 The let rule can be one of the most frustrating in the game of tennis, both for broadcasters and players, despite the fact that it is really only there to ensure fairness and safety. The rule basically states that if one of a list of things happens, the current point needs to be stopped and replayed.

The most common reason for a let to be awarded is where the ball hits the top of the net when a player serves it, but it still lands in the correct service box. In extreme cases, this can happen three or four times in succession, and it can seem as though the point will never start.

The other type of let is where the point is stopped by the umpire, or the players if the match is not umpired, because something has happened which might hinder the players or put their safety at risk. For example, if a ball rolls over from an adjacent court, the point will be stopped to ensure that neither player steps on it.

Essentially, a let is a situation where a point is restarted from the beginning. If a serve brushes the net but still lands in the target area, a let is called and the point is replayed. If a point is disturbed by external intervention, such as the arrival of a ball from a nearby court, it will also be stopped and a let played.

What Does Let Mean In Tennis?

Virtually everyone who plays tennis knows the basic rule here. If you serve a ball and it hits the net before landing in the correct area, that serve does not count and should be repeated. Nonetheless, there are two other parts to the rule which are less well known.

In general, if a serve hits the receiver or any part of their clothing before it lands, the point is awarded to the server. However, if the ball hits the net prior to striking the receiver (before it bounces), a let is awarded and the serve is replayed.

In addition, if the receiver is deemed not to have been ready when the serve was struck, a let is awarded. The latter issue will be a judgment call for the umpire, as the receiver is required to play at the pace of the server, and should normally be ready.

Once a point has begun, it can still be stopped and a let awarded if there is a safety issue or some outside agency has affected play. In this case, the point is always replayed in full, beginning with a first serve, even if the first serve had been missed and the rally had started with a second serve.

As mentioned earlier, the most common scenario is where a ball rolls or bounces across from another court. Here, either player or the umpire is likely to call a let, as a player could incur a serious injury if they stepped on the ball.

However, in non-umpired matches, there are some players who will try to claim a let during a point which they are about to lose, on the pretext that a ball (which may not have been very close) had distracted them. This can result in controversy.

The rules of tennis provide a couple of interesting supplementary examples where a let might be awarded. Firstly, if a spare ball is sitting on the court, which is not uncommon in matches without ball-kids, and the ball in play hits it, play should carry on if the player has good enough reactions to keep the rally going.

It may be, however, that the player hits one ball back, but it is not clear that it was the correct one, and in this event a let should be played.

The final example is where a bird is flying past, minding its own business, and the ball hits it. In this situation, a let is played (and possibly treatment offered to the bird!).

How Many Times Can A Let Be Called In Tennis?

There is absolutely no limit to the number of lets which can be awarded during a tennis match. It is perfectly possible to imagine a scenario where three service lets are followed by a point which is stopped due to an errant ball from the next court, only to be followed up by another series of service lets.

In this scenario, it could take several minutes for a point to start. For this reason, the tennis governing bodies have been experimenting with the idea of abandoning the service let rule and requiring players to return any serve which lands in the correct box, irrespective of whether it struck the net first.

This would be more popular with broadcasters, but players tend to dislike it, as an important point could be settled by a lucky serve which just drops over the net, giving the receiver no chance.

What Is The Origin Of The Word Let In Tennis?

This is not known for certain. Some believe it derives from the Saxon word ‘lettian’, which means ‘hinder’, while others think it may come from an abbreviation of the French word ‘filet’, meaning ‘net’.

The let rule is aimed squarely at ensuring fairness and safety, yet in practice it is unpopular with spectators and can result in disputes between players. At present the top players are resisting calls to modify it, but one day it is likely to be revised.