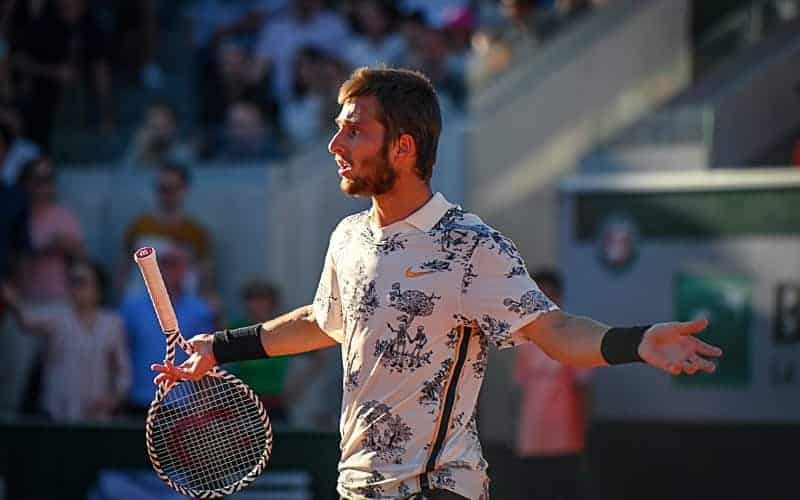 At all levels of the sport, players have to abide by a set of rules during play. These rules will set out the scoring system, the way points are won and lost, along with the requirements for courts and equipment. On top of these, there will be a ‘code of conduct’ setting out guidelines for behaviour. Some players habitually breach this code, revelling in their reputation for rebellion, whereas others occasionally lose their composure, perhaps beginning to throw things and haranguing anyone who will listen.

Given that such bad behavior is generally pretty mild by society’s standards, TV companies and casual spectators tend to relish such outbursts, on the basis that they add to the entertainment value. Some players have gained notoriety that transcends the sport thanks to their ill-tempered rants.

A code violation in tennis happens when the code of conduct is breached. Many different offenses are classed under this heading, and fines will be applied on a sliding scale depending upon the governing body and status of the player. During a match, a player will first be warned and then subjected to increasingly severe sanctions.

What Do Code Violations Mean?

Essentially, a code violation is a breach of the code of conduct. At the professional level, the codes of conduct are set out by the ATP and WTA. These contain numerous requirements for everything from being on time, fulfilling media requirements, receiving coaching during a match, and not swearing or throwing things.

If a player fails to keep to one of these rules, the tournament officials will issue them with a code violation, which may bring with it further punishment. If a player receives a series of code violations during a match they will be sanctioned on a sliding scale, culminating in disqualification.

Players are expected to behave at all times as good role models. This sets rather a high bar for some wealthy young competitors with fragile temperaments, and code violations are not uncommon. Off the court, players can incur code violations for failing to meet their commitments to a tournament, and can incur substantial fines for not following the rules.

A common example occurs when a player who is obligated to attend a post-match press conference has just suffered a disappointing loss and decides to go straight home without answering any questions. They know they are going to be fined, but consider it to be the lesser of two evils.

On the court, players are expected to be polite to officials and the crowd, and not to throw or break anything in a fit of pique. Some of them find these rules hard to stick to, and incur code violations for swearing, throwing or breaking their racket, or hitting balls away in anger. ‘Unsportsmanlike conduct’ is a heading under which players are sometimes punished, basically meaning that the officials did not like the way they behaved.

How Much Do Code Violations Cost?

There is a tacit acceptance that players will incur occasional code violations. Players are fined, but for the top players the amounts are comfortably affordable. The rules do deter a series of code violations, however, by applying a sliding scale of punishments in matches. A warning for the first offense is followed by a point penalty, then a game penalty, and finally a default. If a player is defaulted from a major event, this can effectively cost them millions of dollars, so a cluster of code violations can be extremely expensive.

On the WTA Tour, common offenses like racket or ball abuse will incur fines of up to $2,500, increasing to $3,000 for the heinous offense of leaving the court without permission, with a slightly more significant limit of $10,000 for verbal or physical abuse, or not giving their best effort.

A similar pattern of offenses is punished on the ATP tour, but interestingly they almost encourage ball abuse and racket abuse by setting the maximum fines at a trivial $350 and $500 respectively, whereas the more serious offenses like verbal or physical abuse or not trying can be punished with fines of up to $20,000.

What Are Warnings In Tennis?

A warning is the first stage of the punishment scale for code violations. A player is told that they have incurred a code violation, and they know that the next offense will be punished by the deduction of what might be an important point. The code violation is still recorded and they are likely to be fined by their Tour.

Players Who Get The Most Code Violations

Sadly, there is no league table to refer to here, but some players are legendary for their infractions. John McEnroe remains a cultural icon for his on-court outbursts many years after the end of his career, and some of today’s players may be heading the same way.

Nick Kyrgios always seems to be on the verge of getting fined for something, whether it be not trying or the more prosaic offenses of swearing and breaking things. Luckily, he also has a talent and charisma that draws large crowds, so there will always be a place for him in the sport.

Fabio Fognini is similar in many ways, being highly strung and seemingly constantly at war with himself and the officials, yet also possessing a rare talent for shotmaking. Fabio’s highlights have included challenging an umpire to continue their discussion in the car park!

Benoit Paire is another player whose fragile temperament holds him back despite his considerable talent, and he is one who might be expected to feature strongly in any list of petulant racket-breakers.

Tennis needs colourful characters to attract TV coverage and casual spectators, and many of the players who incur the most fines are the ones who will attract interest and bring in money. It is perhaps not surprising, therefore, that players are rarely heavily punished for code violations.