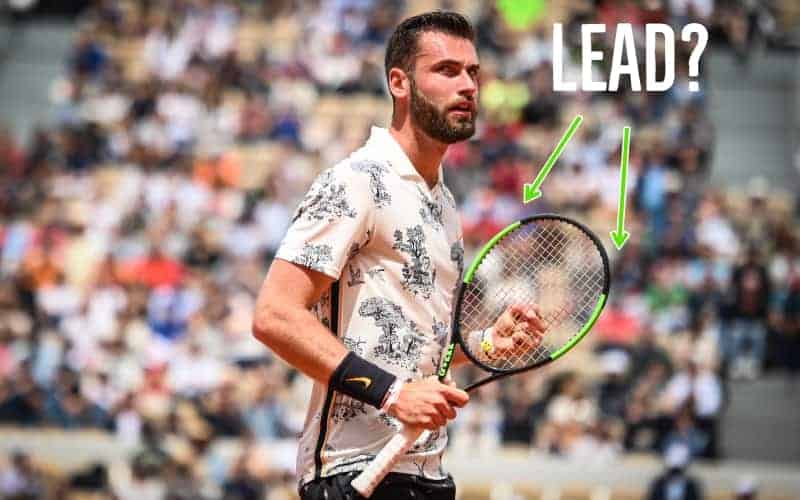 It is always difficult to find a tennis racket which feels exactly the way you want it to. Your chosen racket might be a little lighter in the head than you would ideally like, or it may simply not feel as solid and stable as you would wish. Fortunately, there is a simple method of adjusting the weight and balance of your racket, which basically entails sticking heavy tape around the frame.

Lead tape is most commonly used to adjust the weight and balance of tennis rackets, and it is normally stuck on various parts of the racket head, depending upon the desired effect. Lead is poisonous to humans and Tungsten tape is a less toxic alternative, but big brands like Babolat still make excellent lead tapes.

Why Tennis Players Use Lead Tape

There are several reasons why a player might wish to apply lead tape to their racket. Firstly, they might not like the balance. If a racket feels too light in the head, applying lead tape will make the head heavier, which can produce more power.

It can be beneficial to make the racket heavier in the head whilst only moderately altering the balance, as this can give a more solid feel and move the sweet-spot slightly.

This requires lead tape to be added to other parts of the racket to counterbalance that which has been added to the head. It is also possible to add lead tape in such a way as to purely increase the weight of the racket without changing the balance in any way, although this obviously requires care.

Interestingly, not all rackets of the same model are precisely identical, and different batches can have different playing characteristics. It may sometimes be helpful to measure the balance of each of your rackets and apply a small amount of lead tape where necessary to ensure that they all feel like the one you prefer.

Where To Put Lead Tape On A Racket

If you want to achieve a specific effect through the application of lead tape, you must apply it with precision. The following suggestions are just guidelines, described using a simple clock-face analogy where appropriate. The tape is normally stuck to the inside of the frame in the positions described.

Twelve O’Clock: putting tape here will unequivocally make your racket more head-heavy. It is possible to significantly change the balance in such a way as to produce more power by doing this.

Three O’Clock and Nine O’Clock: applying tape to either side of the racket head will still make it more head-heavy, but less dramatically so than putting it at the top. This should also make the racket head more stable if the ball is struck off-centre, and will offer some additional power.

Two O’Clock and Ten O’Clock: this intermediate position will make the racket more head-heavy, but not as much as putting the tape at the top. It will tend to move the sweet-spot towards the top of the racket slightly.

Throat: putting tape here will increase the weight of the racket without significantly changing the balance.

Grip: tape can be placed under the grip to make a racket feel less head-heavy, or simply to counterbalance tape placed on the head if the objective is an increase in weight rather than a change in balance.

Lead is poisonous if ingested, so it is sensible to wear gloves whilst applying the tape. However, unless you are going to swallow it or absorb it through your skin, it should pose no risk.

If you have concerns about using lead tape, you may prefer to use a tungsten version. Tungsten has the advantage of being even more dense than lead, so smaller quantities are needed to produce the desired effect.

Unfortunately, Tungsten tape is also a little less soft than lead, which makes it less user-friendly, and it can be more difficult to securely stick to the racket frame. Nonetheless, some players will prefer to avoid lead tape, and will therefore use tungsten.

If the tungsten tape is secured using head tape this can render any problems with adhesion less problematic.

The Best Lead Tapes For Tennis

Babolat and Gamma both make popular tapes. Many prefer Babolat because it is thicker, meaning less tape is required, but conversely Gamma can be easier to work with.

A brief glance at Amazon will show you that there are many other brands available, most of which are reasonably well-reviewed by customers. As long as a tape has good adhesive properties it is difficult to go too far wrong.

Lead tape is extremely useful for making subtle changes to the playing characteristics of your rackets. It can easily be applied and removed to allow you to experiment with different weight and balance changes. Keep in mind, however, that if you feel dramatic alterations are required it may be simpler to purchase a new racket!

When choosing a racket, it is important to understand the specs that are associated with it. This will give you a better idea of how the racket will feel before you even play with it. One of these...

Continue Reading
link to Adding Weight To Your Tennis Racket: A Beginner's Guide

Disclaimer: this article was written by one of our tennis friends, Mousheg Hovhannisyan. He has an extensive knowledge in this subject and we want to bring the best possible information for you. You...