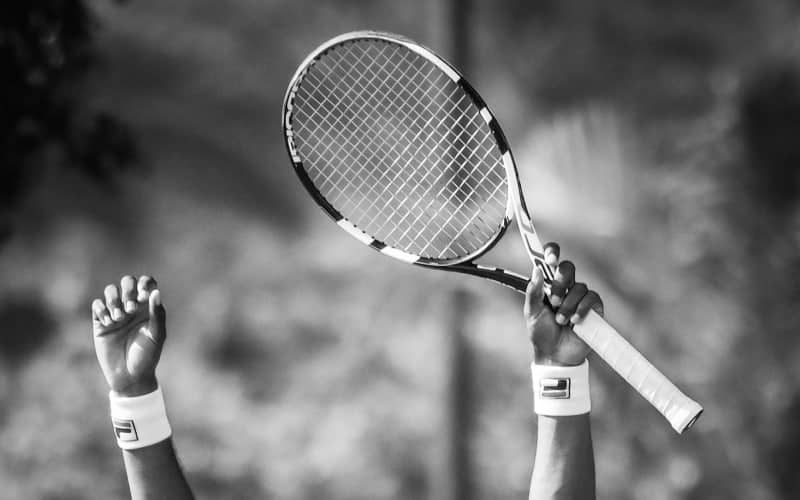 In France in the 1870s, Pierre Babolat had established a business making strings for musical instruments. In 1875, he turned his attention to the newly established game of lawn tennis and began making racket strings from sheep intestines. These were the first ‘natural gut’ tennis strings, and some leading players still use a modern equivalent of these.

Natural gut dominated until the 1950s, when synthetic strings became a more budget-friendly option. Around this time, natural gut strings were given more durability by a switch to the use of cow intestines. The spectacular successes of Gustavo Kuerten in the late 1990s changed the landscape substantially, popularising the use of polyester strings. In this article, we will look in more detail at the most popular categories of string available today.

While the basic option is to use the same strings for the whole racket, many players use hybrids, putting different strings in as mains and crosses.

From the time M. Babolat first put them into a racket, these were the string of choice for virtually every keen player. Even when synthetic strings initially became available, the latter were considered an inferior, cheap, alternative until polyester strings became fashionable.

Natural gut offers great feel, comfort and power, and for this reason is still used by leading players such as Federer and Djokovic as part of their string set. Away from the main professional tours, it is now very rare to encounter anyone who plays with natural gut strings due to its many disadvantages.

Firstly, it does not perform well in cold or damp conditions. It is prone to fraying as it wears, and in any event it is not particularly durable. Not only this, but natural gut is extremely expensive, with a set costing $40 or more even before you pay your stringer.

As the pros play almost exclusively in good conditions, and get their rackets restrung every time they play, with cost being no object, they can reap the benefits of natural gut. For the rest of us, other options are likely to be better.

Although they sound similar, synthetic gut is very much at the opposite end of the scale to natural gut. It is a nylon string, normally featuring some kind of outer coating to improve its playing characteristics. Synthetic gut can be very cheap, with some manufacturers offering reels at a price equating to less than $2 per set.

It is generally regarded as an ideal string for beginners, as it offers reasonable all-round playing characteristics at a low price. More experienced players, who hit the ball harder, or wish to generate more spin, are likely to find synthetic gut less satisfactory. In particular, its lack of durability is likely to be a problem for bigger hitters.

This multifilament tennis strings category covers a wide range of strings which are constructed by weaving together numerous fibres in an attempt to produce something superior to synthetic gut. A well-designed multifilament string offers a good level of power, control and feel.

Using a multifilament can be particularly beneficial for players who have suffered from tennis elbow, as it tends to be softer than most other types of synthetic string. These strings do have two significant disadvantages. Firstly, they are relatively expensive, and secondly they are not usually sufficiently durable for use by powerful players who hit a lot of spin. For stronger players, their main use might be as part of a hybrid string set.

Most top players tend to use a combination of two different string types in their racket, in the hope that this will enable them to benefit from the best qualities of each. Polyester strings, which are durable, and enable players with the right technique to produce a large amount of spin, are likely to feature in these sets.

Although Nadal, for example, uses a polyester string in both mains and crosses, others will prefer to partly string their racket with something offering greater feel. Federer and Djokovic both use natural gut in their main strings and a polyester cross string. They do this because the main string has the greatest influence on feel, and they want the feel of natural gut.

This kind of arrangement would not be suitable for most amateurs, however, as the main strings are the most prone to breakage, and using natural gut there would require frequent and expensive restrings. The best compromise is normally to use a tough polyester main string with a softer cross string, such as a multifilament, to add feel.

How To Choose The Right Strings For Your Game

The way your tennis strings are made, and the materials used, will have a big influence on the way your racket feels when you hit the ball, how quickly the ball leaves the racket, and how much spin you apply. There are many options to consider, but, if you are a big hitter without an unlimited budget, you will have little option but to incorporate at least some polyester in your string set.

To find the best string for you, you will want to experiment with various types of hybrid set, probably using polyester mains. In essence, you will need to counterbalance how good a string set feels against how long it lasts. If you are a light hitter, a multifilament may be a good choice, while a beginner will find synthetic gut more than adequate.

There are many good strings available, with new ones coming on to the market all the time, so do not be afraid to try out new options. A better string choice could give you the edge you have been looking for.