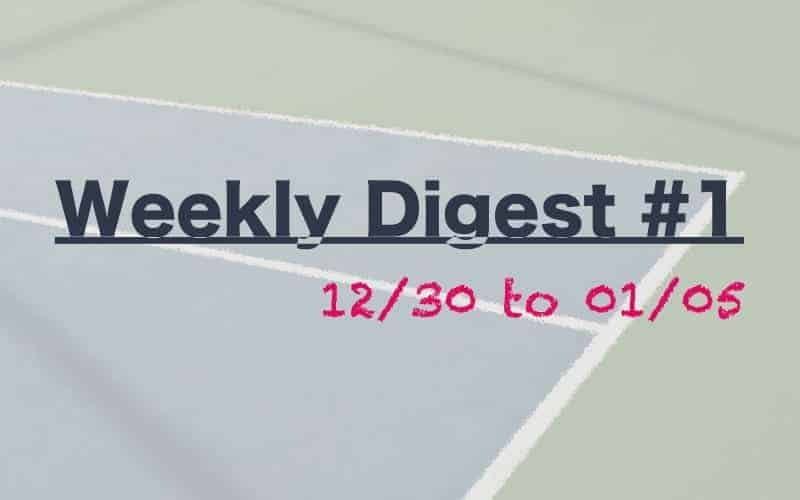 It’s a new decade and tennis has come back in style! The new tournament ATP Cup has kicked off this week, and we’ve seen some very interesting matches so far. Some NextGen stars have been stealing the spotlight, including Casper Ruud, Alex De Minaur, Daniil Medvedev, Denis Shapovalov, and Stefanos Tsitsipas. However, they’ve been playing mostly against each other and haven’t faced any of the Big 4. So while things are looking very exciting, it’s a little too early to tell if we will have a new contender for the Australian Open title.

In terms of Big 4, only 2 of them have been in action this week. Both Nadal and Djokovic didn’t play their best against Basilashvilli and Anderson, respectively, but they still managed to come out on top. As usual. And Andy Murray has announced that he will be out for the Aussie Open due to a groin injury, which means that we will need to wait a little longer to see him back in action.

Australia, Russia, and Bulgaria have been the best teams of the week, with 2 wins each. However, out of the 3, I only see Russia as having a real chance of taking the title away from Spain.

Some cool off-court news is that Nick Kyrgios and other Australian Players have initiated a campaign where they will donate money to people affected by the fires in Australia – for every ace they hit during the Australian summer. The ATP has joined the campaign, and athletes from other sports have done so as well. Maybe Kyrgios was just trying to clean up his image, but what is important is that this campaign should help a lot of people. Good start to 2020!

Winners Of The Week

Match of The Week

What We’re Looking Forward To

We’re excited to see how the first-ever ATP Cup will end. Some of the Next Gen players seem to have put in the work during pre-season, and it will be interesting to see how these weeks before the Australian Open will go. Tuesday should be a great day for tennis, with matches that will most likely include Zverev vs Shapovalov, De Minaur vs Tsitsipas, Medvedev vs Ruud, and Goffin vs Dimitrov.

After a tough first match, we will see if Novak Djokovic will be sharp enough to lead Serbia past Paire and Monfils’ France. It should be a decent test for him. Nadal, on the other hand, should not see any difficult matches until the Knockout stage.

Group E should be interesting to watch as well, as Austria, Croatia, Poland, and Argentina all have a shot at coming out on top. While there are a lot of players playing well, I believe the only team that might take the title away from Nadal’s Spain is Russia – with Khachanov and Medvedev.

On top of that, we’ll have the ATP 250 in Doha happening this week. With most of the main players currently competing in the ATP Cup, Doha ended up with Wawrinka, Rublev, Tsonga, and Raonic as the first 4 favorites. Rublev and Wawrinka should cruise through the semis, while Tsonga and Raonic might struggle. We’ll keep our eyes on Wawrinka as Rublev, as they are the best contenders to do some damage in the Australian Open.

On the women’s side, we’ll have Shenzhen, Brisbane, and Auckland this week. We’re mostly looking forward to Brisbane, as 6 of the top 10 are in that draw. It should give us a good idea of who’s gonna have a shot at taking the Australian Open title home.

What We’re Up To

This week, Karue is in Brisbane with Naomi Osaka’s team. He will be focused on helping her win the title and get ready for the Australian Open. Karue has been working on getting a lot of good content from the ATP Cup as well and uploading it to our Youtube and Instagram channels.

Gui has been working consistently on getting some more tutorials on our website, especially some very thorough guides for beginners.

Stay tuned for a lot of cool content coming out this week!