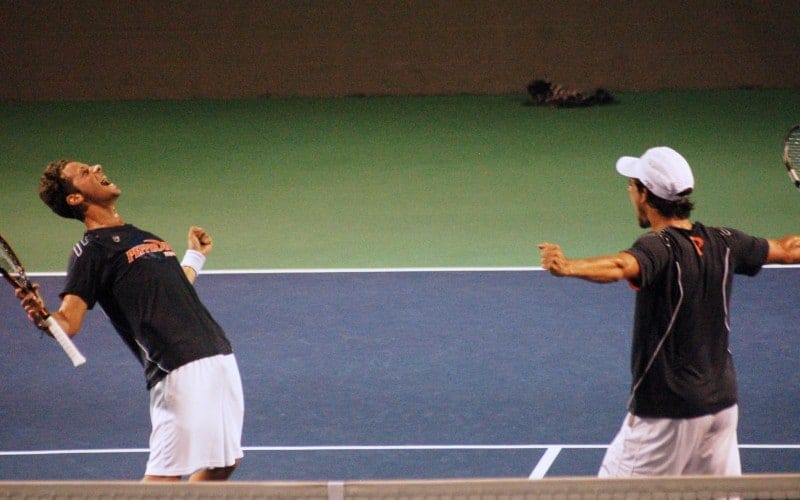 If you are a junior tennis player with ambitions of playing professionally, it is possible that, if you have a high world junior ranking and support from sponsors, you might be able to start out on tour at the age of 18. In practice, few teenage players, particularly men, are physically, mentally, and financially ready for this. The most logical step for everyone else is to find a place where they can train and play at a high level for the next few years while continuing their education.

In the USA, many leading colleges have excellent tennis programs. The standard in the upper echelons of NCAA competition is good enough that players can retain some hope of ultimately playing on the Pro Tour, and scholarships are available for the best prospects.

Stanford’s educational reputation is well known, but it has also operated one of the leading tennis programs for many years. In the years prior to 2000, they won 17 NCAA championships, and, while they have not enjoyed quite the same level of success in recent years, they are still competitive with the best, and seem to have recruited well for 2021. Famous alumni include John and Patrick McEnroe, and the Bryan Brothers.

Another respected institution with a strong tennis history, UCLA has won 16 men’s NCAA championships and 4 women’s titles. In 2019, the Bruins won both men’s and women’s doubles events at the NCAA championships. They can point to a long list of successful former students, including Arthur Ashe, Jimmy Connors, Peter Fleming, and, more recently, Jean-Julien Rojer, Mackenzie McDonald and Jennifer Brady. The women’s team is currently coached by Stella Sampras, sister of Pete.

USC has in the past suffered from probably unfair preconceptions that it was a place for the children of the wealthy. Its academic reputation has been gradually growing. In tennis, the USC Trojans have earned 21 NCAA men’s championships over the years, along with 7 women’s titles. The strength of their programme is shown by the regularity with which they produce players who succeed at NCAA or professional level.

The Wake Forest campus is located in Winston-Salem, North Carolina. It is a relatively small university with a solid academic reputation. The sports teams are known as the Demon Deacons. In tennis, they have demonstrated an ability to challenge the very best in recent years, winning the NCAA national men’s championships in 2018. Current professional Noah Rubin is a Wake Forest alumnus, having won numerous accolades during his NCAA career, and earning the runner-up spot in the 2015 NCAA singles championship.

Based in Athens, Georgia, the University of Georgia is a public university which occupies a respectable position in various academic league tables. In tennis, the Bulldogs have won 6 men’s NCAA team championships (plus two indoor wins) and two women’s titles. They have established a reputation for running one of the strongest tennis programmes over a number of years, and their home venue often hosts the NCAA team championships. Former top 10 player and legendary server John Isner is a notable alumnus.

Ohio State is another solidly performing public university. Based in Columbus, Ohio, they have a strong record in tennis, and enjoy an excellent facility with 12 outdoor and 6 indoor courts. Whilst the Buckeyes lack the overall national success enjoyed by some of the other colleges in this list, they have a strong record in their conference. Alumni such as Blaz Rola and Francesca Di Lorenzo have gone on to enjoy professional careers.

The University of Virginia is a large, well-respected public university. In tennis, the Cavaliers have risen to prominence relatively recently, winning four men’s NCAA titles between 2013 and 2017, as well as four individual NCAA singles titles. They have produced several players who have gone on to have solid professional careers, including doubles specialist Dominic Inglot and 2019 Australian Open semi-finalist (and double NCAA singles champion) Danielle Collins.

University Of Texas At Austin

The University of Texas at Austin was recently ranked 31 in the world in the Times Higher Education Reputation Ranking. In tennis, the Longhorns won two women’s NCAA championships in the 1990s. In 2019 they finally earned their first ever NCAA men’s championship. Their most famous alumnus is probably former Wimbledon finalist Kevin Curren.

Academically, Berkeley is generally regarded as one of the top 10 universities in the world. Their tennis programme is solid, without too many big stars, although Grand Slam doubles champion Rajeev Ram is acting as an assistant coach when he is available. Former world number 1 Helen Jacobs, and former pro and now coach Mike Russell are alumni.

The University of Florida is an attractively located college ranked as one of the top 10 public schools in the USA. In tennis terms, the Gators are particularly renowned for their women’s programme, which has earned 7 NCAA team championships, as well as producing three individual champions (including one double winner). The men’s team have been successful at Conference level, and have produced two individual NCAA champions. Alumni include Lisa Raymond, Jill Craybas and Ryan Sweeting.

There are some fantastic colleges to choose from if you can meet the academic and sporting requirements. Just remember that any scholarship has to be earned on an annual basis, so staying fit and motivated is vital.