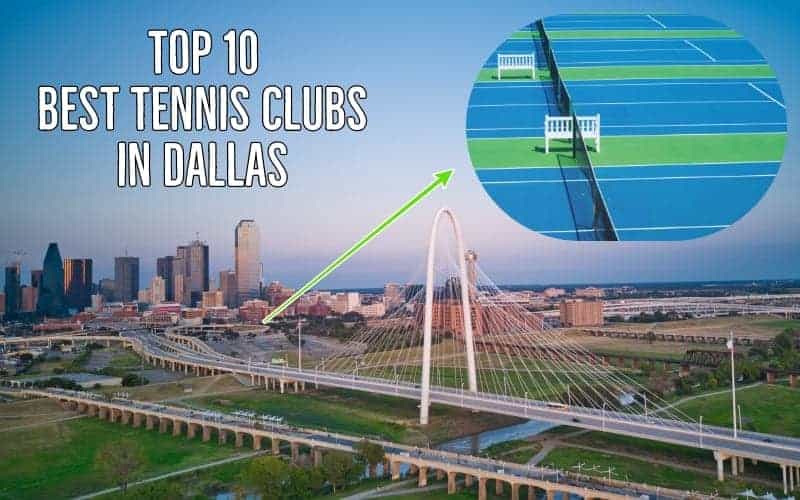 Dallas is cosmopolitan city which is home to more than 1.34 million people, making it the 9th most populous city in the US. As you would expect, there are plenty of options for tennis enthusiasts in the local area. So, which are the best tennis clubs in Dallas?

The answer is not clear and obvious, as there are a number of excellent public facilities, some private tennis clubs and even several very exclusive country clubs. In this article we will describe ten of the very best tennis facilities in and around Dallas, giving you the opportunity to make your own mind up about which would be best for you.

At the Fretz Tennis Center there are 15 outdoor hard courts, with indoor courts planned for the near future, plus 4 PickleBall courts. The Center is renowned for its excellent group coaching sessions and welcoming atmosphere. It is run by Texas Impact Activities, and is one of the more affordable options, with an initial payment of $66 plus $16 per month allowing unlimited court time at any local Texas Impact facility. Alternatively, you can book a court for 1.5 hours at a cost of $4, and a ball machine can be hired for $17 per hour to facilitate individual practice. On the downside there have been reports of a few cracks on one or two of the courts, but they are generally in nice condition.

T Bar M styles itself the premier tennis facility in Dallas. It offers a total of 28 tennis courts, including 14 outdoor hard courts, 8 indoor hard courts, and 6 Har-Tru clay courts. In addition, there are facilities for Padel and PickleBall. The facility is of a high standard, but is not cheap, with individual membership available for an initial fee of $500 followed by $225 per month. Swimming and fitness facilities are also available, giving a genuine country club feel. Most reviewers like the atmosphere, and the coaches are popular.

The Samuell Grand Tennis Center has 18 outdoor hard courts plus 10 Pickle Ball courts. It is another facility run by Texas Impact Activities, so the same membership plan described under Fretz Tennis Center will cover you for unlimited court time at Samuell Grand. Individual bookings cost $3 for 1.5 hours, with ball machine hire available for $17 per hour. Reviews suggest that the facilities are good and there are often courts available. Group sessions are well-liked.

The tennis center at the Southern Methodist University, known as the Styslinger / Altec Tennis Complex, features 6 outdoor and 6 indoor hard courts. Student athletes train there all year round, and the center is due to host the ATP Dallas Open from 2022. It also features fitness facilities. The public are able to use the courts when not required by the University, and the coaching and courts are highly rated.

The LB Houston Center is run by Texas Impact Activities, so its membership costs are the same as for Fretz and Samuell Grand. It features 16 outdoor hard courts and 12 PickleBall courts. Court fees are $3 for 1.5 hours, and a ball machine can be hired for $17 per hour. Reviewers tend to like the quality of courts and coaching, although some observe that the courts can get busy at peak times and it can be difficult to get through to the Center by telephone.

Royal Oaks is another authentic country club, with golf being their highest profile activity, but with tennis certainly not neglected. The tennis facilities were completely renovated in 2013, and feature 13 floodlit outdoor courts along with two indoors. The club also offers a large fitness center. Membership is by invitation only, and the cost is not readily available online, which suggests that you need to be fairly wealthy to join. Reviewers are complimentary about the facilities.

Lakewood is an up-market golf & country club featuring eight hard tennis courts. It claims between 700 and 800 members who are eligible to use the tennis facilities. Membership is by invitation, with a substantial waiting list. Reviewers are impressed with the facilities, but you will need to be wealthy as well as patient to join: there is a $25,000 initiation fee if you wish to join as a tennis member, which is tripled if you aim to play golf.

Dallas Athletic Club offers golf and tennis facilities featuring 10 floodlit hard courts. Again, the focus is on golf, but the tennis facilities and teaching are well reviewed. Membership costs are not readily published, which means that you will need access to substantial funds if you plan to join.

High Point is more of a traditional (and affordable) tennis center, with 21 floodlit outdoor hard courts and eight PickleBall courts. A large renovation project has recently been undertaken, so the bulk of the facilities should be in excellent condition. Court fees are $3 per hour per player for residents, or $4 for others.

The Clubs Of Prestonwood – The Creek

The Creek is primarily a golf club, but it is also a country club offering six outdoor hard tennis courts. It offers a full range of tennis activities, including coaching and a ball machine. Reviewers are positive about the tennis operation, but the cost of joining is likely to be substantial.

There are some great tennis clubs in Dallas. If you have a substantial budget, one of the country clubs may entice you, but otherwise you still have a good choice of specialist tennis facilities.