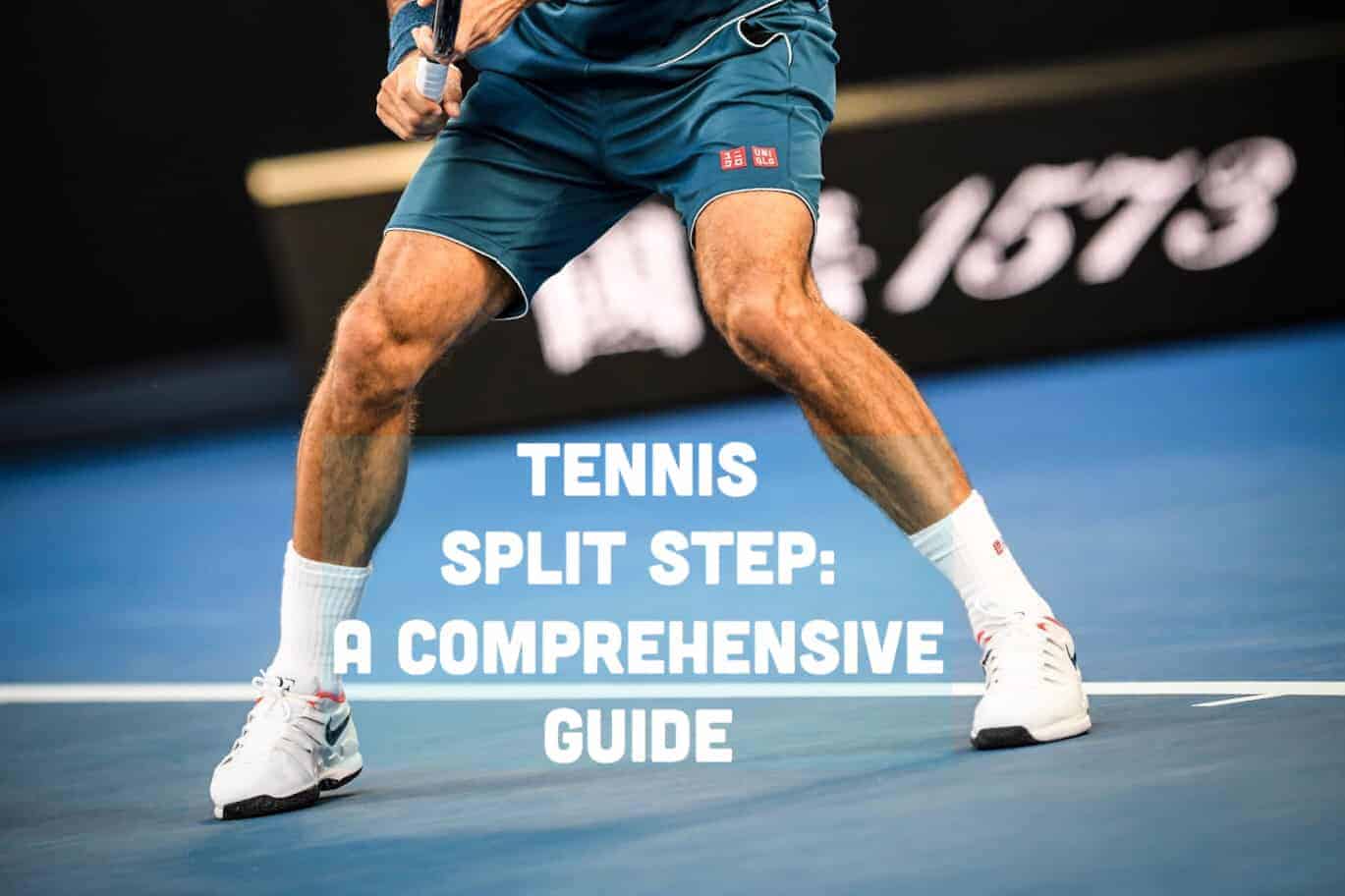 As a tennis coach, I see a lot of players spending a ton of time working on their strokes but I don’t see nearly as much effort on the footwork aspect of tennis. Having good footwork is indispensable if you want to be a solid tennis player. Good footwork starts with a proper and well timed split step. I cannot stress enough how important the split step is for players to successfully move on a tennis court. And giving my experience as a player and as a coach, I can confidently say that a lot of players do not execute the split step properly and do not put in the work to improve it. So today we will dive deep into this subject.

The tennis split step is the hop players take before moving to the shot that was hit to them. The split step allows players to be more prepared to move in any direction and react faster to shots coming their way. A properly executed split step is the foundation of footwork in tennis because it allows players to move much quicker and efficiently towards the ball. The reason it helps players move better is because at the moment of landing, their legs are bent and loaded and will act as springs to impulse them in the direction of the ball. A good split step demands proper timing in relation to when the opposing player makes contact with the ball; mistimed split steps will make a player look slow and sluggish on the court.

The tennis split step is a very important footwork movement and we want to help you improve it. Below, we will cover it in depth. We will talk about technique, timing and execution of a proper split step. We will also explain its purpose and why it is so important to work on it. And lastly, we will show you how to train it and the areas you should be looking to improve. So let’s get to it.

Let’s first watch what the split step is. Here is a 30 second clip of me hitting with Naomi Osaka on Rod Laver Arena. Pay attention to my feet so you can see the split step.

So that is the split step. As you can see, I take a little hop right before the other player makes contact with the ball. The hop starts with me being in a very neutral position going up, following by landing in an athletic position with my legs bent. From there, I am able to push of quickly to either side. I repeat this action every time the opposite player is close to making contact with the ball.

Timing of the Split Step

The most important aspect of a properly executed split step is the timing of it. A common problem I see with my students is that they often mistime the split step, resulting in slow reactions. This happens because it is common in tennis instruction for coaches to say “you need to split step as your opponent hits the ball”. While that is not incorrect, a less advanced player might misinterpret it. What will happen is that players will initiate their split step, meaning jump, as the opponent makes contact with the ball. The result is that players often find themselves in the air as the ball is already traveling to their side of the court. Consequently, players will be late to the shot.

By the time your opponent touches the ball, your feet should be touching the ground from your hop. As the ball leaves the other player’s strings, you should be in the loaded position and ready to move in any directions. The split step jump needs to start a split second before the other player makes contact with the ball. So your focus needs to be on properly timing the landing of the split step with the moment your opponent hits the ball. By timing your land correctly, your legs will be bent and ready to push off like springs in any direction.

At the end of the day, timing is everything. You can have a great split step technique but if you mistime it, it will be ineffective. So next time you are on the court work on timing the land of the split step with your opponent’s contact with the ball.

There are a couple ways for you to split step more effectively. The first is by using one foot to push off the ground and land on both legs. This is the most common way. Let’s take a look:

See how Federer hits the ball, stays on his toes and then pushes off with one feet and lands on both legs. It is very rhythmic and repetitive. By always split stepping at the right time he is able to move much quicker in any direction he is required.

Another method we commonly see, especially at the highest level, is that players don’t really jump up. Instead, they drop into a staggered stance. We see this very often when players are in two situations. The first one is when players are in extreme defensive situations. By cutting the hop out of the split step, players are able to give one or two extra steps back to the middle of the court, allowing them to recover more appropriately. Giving the speed of today’s tennis, gaining split seconds is incredibly advantageous.

The other time we see players dropping down without hoping is on the first shot after the serve. Serves are fast and returns will come back quickly so sometimes there is no time to hop. Take a look:

Now let’s focus on the landing. The first thing you need to remember is that as you land with a wide stance and your legs bent, you cannot straighten them back. As you land you will know in which direction to move and your legs and body should shift in that direction. Let me explain.

Let’s say my opponent hits his shot to my forehand corner (I am right handed), when I land with my legs bent, my right leg opens up to my right side and, at the same time, my left leg pushes my body in that direction, which initiates the lateral movement. Here is a video to illustrate it better.

See? As I land and learn the direction the ball is going, my body shifts in the same direction. The split step allows me to perform that movement much faster which ultimately increases my agility on the court. As you improve your split step, keep in mind the word “explosive”. The reason you are split stepping is to load your legs like springs so you can be more explosive moving to the ball. If you just split step but don’t react, the movement will be pointless.

Using The Split Step as Breaks

In a previous article I wrote, I explained that the split step also acts as a form of braking system on the court (How to Improve Your Tennis Agility – Hit the Breaks). In the article I show a video of Federer playing a point where you can clearly see how well he uses the split step. Here is the video:

Pay attention to how he is able to use the split step to control his body after recovering from a difficult shot. When we are pushed wide, our natural instinct is to speedly recover to the middle. However, because tennis is so fast, we might not have time so we need to split step wherever we are at the point our opponent is making contact. That allows us to cover the court better. If Federer didn’t split step in that point, the third shot he hit (the forehand slice) would have been a winner because all his momentum would have been going in the opposite direction (watch it again). So again, the split step is a great way for you to break and have your body in a ready position.

What Happens When You Don’t Split Step

As we repeatedly said in this article, the split step is necessary for players to be fast and agile on the court. If you don’t do it you risk a few things.

First, you will be slow. If you do not have that “spring/bouncy” force helping you move to the ball, it will require a lot more effort to move to the ball. It is simple, by not split stepping you will be flat footed, with your heels on the ground and it will be much harder to move in any direction.

Second, as I explained earlier, split steps help you break and control your momentum. If you fail to split step, it is much harder to control your body and you can get caught too close or too far from the ball. If you are recovering back to the middle and you do not split step and your opponent hits the ball behind you, you’ll likely not be able to recover.

How To Train Your Split Step

I believe that in order for you to train your split step, you need proper visuals. So I went online and researched some of my favorite split step training drills. I linked all of them below.

The split step is a fundamental component of any player’s footwork. Yet, its importance is often forgotten by players and coaches. We at MyTennisHQ believe that minor improvements on your footwork can have a massively positive impact in every player’s game, regardless of their level. And good footwork starts with a well executed split step. We will cover more split step in the future so make sure you subscribe to our email list so you don’t miss it. Stay safe, everyone