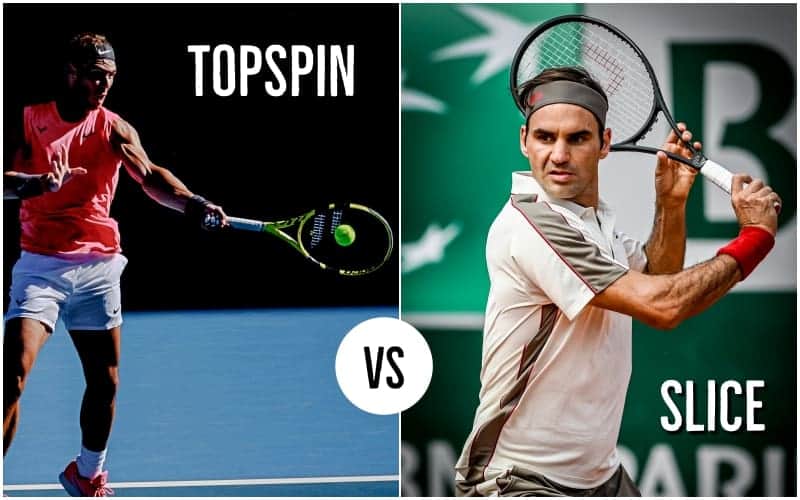 When you are playing tennis it’s all about getting the ball over the net and trying to hit a shot your opponent can’t return. At the start, you’re content with just hitting the ball flat but as your skill level progresses you need to add variation to your game. For that reason, it’s vital to add different types of shots to your repertoire. The most common variations are the slice and the topspin. But what is the difference between these two groundstrokes?

Basically, a slice causes the ball to rotate backward (toward the person who hit the ball). A topspin shot, on the other hand, rotates forward toward the opponent as it travels through the air. A player can add slice or topspin to shots by hitting the ball in different places.

What Is Topspin In Tennis?

Modern-day tennis players utilize topspin frequently, as it can appear that the ball will sail over the net and out of bounds before dropping well within the lines of play.

Topspin has changed how tennis is played due to the fact that you can generate much more power behind your shot with a proper topspin forehand. Many of tennis’ greats, such as Roger Federer and Rafael Nadal, have relied on their vicious topspin forehand to win world championships and countless titles.

There are many variations of the topspin forehand where players will choose a desired Western or Eastern grip depending on their style of play. Generally, when practicing a topspin forehand, players will implement a semi-Western grip, as you are able to apply a greater amount of spin to the tennis ball using far less effort.

A player can add topspin to a shot by hitting the ball in a “down-up” movement, which causes the ball to rotate towards the opponent.

What Does Slice Mean In Tennis?

Backspin is most commonly achieved when using a slice shot technique. During a slice shot, the racket travels in a downward motion, before slicing underneath the tennis ball.

Using this technique, you can make it very difficult for your opponent to return your shot with topspin, making the slice a great defensive shot. Since many modern tennis players rely on their topspin forehand to dictate the pace of the match, the slice is most commonly seen as a defensive shot that can be used as a last-ditch effort.

When To Hit Topspin vs Slices

Topspin shots are used by most tennis players as their general groundstroke because it forces opponents to go backward. Good topspin shots will land just in front of the line and bounce towards the opponent so he has a tough time generating power and needs to have good footwork to cope with it.

Topspin shots are also used to come towards the net as previously mentioned it pushes the opponent back, which gives you time to advance to the net.

A slice is often used when you return a serve and then come straight to the net (known as “Chip and Charge”) because it gives you time to do so. The same can be set for other net approaches. When you’re moving forward toward the net and you want to drive a low-bouncing ball into the corner of your opponent’s court. This leaves it tough for the opponent to hit it back with much pace.

Another instance when you are using a slice is if you want to surprise your opponent with a drop shot. It is also the most commonly used shot when you are in a defensive position. When you’re scrambling to retrieve a good, angled shot by your opponent you can swipe the ball back with a slice and buy yourself a little time to get back into position.

The Importance of Variation In Tennis

Implementing finesse into your shots when competing against other tennis players is a great way to throw off your opponent by forcing them to change their game plan on the fly.

Nuanced shots can effectively deceive your opponent, causing them to approach the ball incorrectly while increasing the likelihood that they will not be able to return your shot. By using the proper topspin or backspin techniques during your next competitive match, you will be able to easily keep your opponent on their toes, making it much more difficult for them to adjust to your techniques throughout the entirety of your match.

To be a complete tennis player and to be competitive you need to master every shot and you need to know when to use them. If you look at the top players in the world they know exactly how to use topspin and slice shots to their advantages.

Rafael Nadal for example knows that with his extreme spin on the forehand he can make it difficult for a player like Roger Federer with his one-handed backhand to generate power. With the topspin, he forces Federer and other opponents to either be pushed too far backward or to take a risk and hit the ball extremely early.

The same can be said about Federer’s use of the backhand slice. He knows like no other how to disrupt the opponent’s rhythm by using the slice in almost every rally or how to completely catch them off guard with a drop shot.

Topspin and slice shots are a necessity in tennis. They are something you should work on and get better at but in the end, are extremely fun to use.