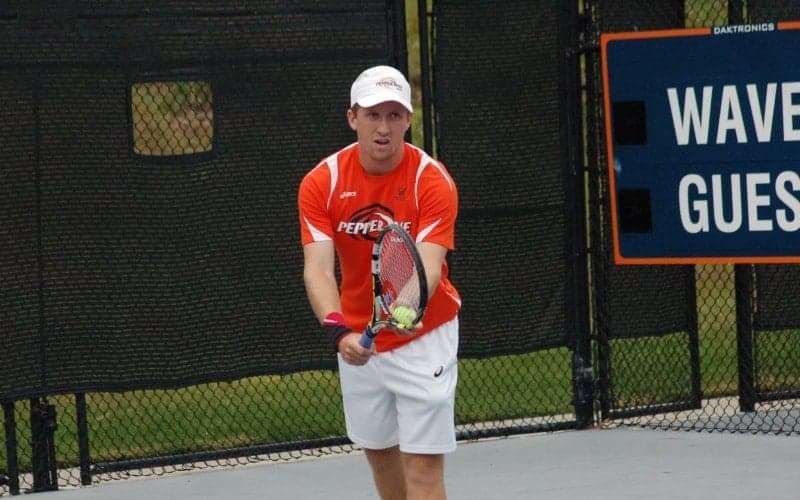 Eventually, Tom decided to join the Pepperdine Men’s Tennis team (Go Waves!) and played mostly in the 4, 5, and 6 position in singles and 2 and 3 in doubles. Tom played a pivotal role specially in the doubles line up at Pepperdine, helping the team win extremely important doubles points. He succeeded both on and off the court, graduating with honors in only 3.5 years.

After graduating in 2017, Tom started working on the WTA tour as Danielle Collins’ coach. Under his guidance, Danielle went from ranking #220 in the world to #39 in a little over 8 months. She won the WTA of Newport Beach and reached the round of 16 in Indian Wells and the semi-finals in the Miami WTA.

After Tom and Danielle ended the partnership, he starting coaching Maria Sakkari. Tom helped Maria enter the top 20 for the first time, reach the semi-finals of the Rome WTA, and win her first WTA title in Charleston.

On a personal note, Tom is an outstanding human being, and he is one of my best friends. We have known each other since we were 14 years old, we got to play doubles in a few ITF tournaments, and we went through a lot of stuff together at Pepperdine. He gave us a different perspective today on how college tennis can help you, and we hope you enjoy!

I committed very late, around November 2013 to start in January 2014. I was debating with myself whether I should try the futures or college tennis route. I was just outside the top 100 in the juniors and wanted to go straight into futures. But I ended up getting a stress fracture in my back when I was 18 and that was when I decided I would give college tennis a go.
I was fortunate that I had many schools talking to me. The main schools I considered were USC, University of Texas, Georgia, Kentucky, and Pepperdine. To be honest, I knew very little about College tennis and because I left my decision very late I wasn’t able to go on any official visits. I actually committed to Texas but at the last moment, they told me they made a few mistakes with the finances and wanted me to redshirt my freshman year (I probably should have done that). But because of this, I ended up choosing Pepperdine as they wanted me to start right away.

Although it took a long time to get used to, I enjoyed the team aspect. Most tennis players in the juniors only play for themselves yet in college you suddenly have 9-12 teammates depending on you. You’ll have moments when those guys are depending on you both on and off the court and vice versa. My sophomore year we beat the University of Florida in the first round of the NCAA. We were massive underdogs and I still don’t know how we did it but that year I remember us all playing for each other. It’s a great memory and proves how you’re more powerful as a team than as an individual.

I’m currently the coach of top 20 player Maria Sakkari. I’m not sure college tennis prepared me for this role apart from keeping my tennis sharp! However, I will say having a degree from Pepperdine gave me the chance to give this career a go, knowing that if it failed, I had something to fall back on. Although, I will say that some of the classes I took, like public speaking, helped me develop skills that I use daily in my job.

I don’t believe a player’s tennis will suffer because of the academic demands of college. It takes a few weeks to get used to but once you figure out how to properly manage your time, you’ll be fine. You’ll still practice 3-5 hours per day and do fitness, which is plenty!

The social component of college should be seen as a positive not a negative. As a player, if you are thinking about tennis 24/7 you will burn out and go crazy. I’m not saying a player should go out all the time but if they manage it well and go out when they know they have a couple days off afterward then it’s fine. In fact, it’ll help their tennis. If these players weren’t going to college, I highly doubt they would never go to a club or bar every now and again. It’s no different…

The most important thing to research before deciding on which college to go to is the coach. The social side, academics, living conditions, whatever really don’t matter and will be very similar at most top division 1 programs. However, if you really want to give yourself a chance to make it as a professional after college then the coach is the most important. So many players either don’t improve or actually get worse not because of social distractions or academic stress but rather because the training they are doing on the tennis court is completely useless.

There are a few good coaches in my opinion but many that don’t know what they’re doing. You see generic hitting and drills that don’t do anything. There is no specific training based on what you individually need to work on but more training that the group needs to work on. There is no way if you have 12 players on a team that they should all be working on the same drills. They are all unique and deserve to have a training plan specific to them. I obviously know this now from working with many of the best players and coaches in the world as both a hitting partner and coach. So yeah, picking the right coach should be your biggest concern.

It’s impossible to know where my tennis would be now if I had decided against College. My opinion is that I would have reached a higher level but still not have been good enough to make a living from the game. With that said, I developed friendships for life with teammates and met many other great people from Pepperdine. I had 3.5 incredible years and graduated with honors and am very proud of that.