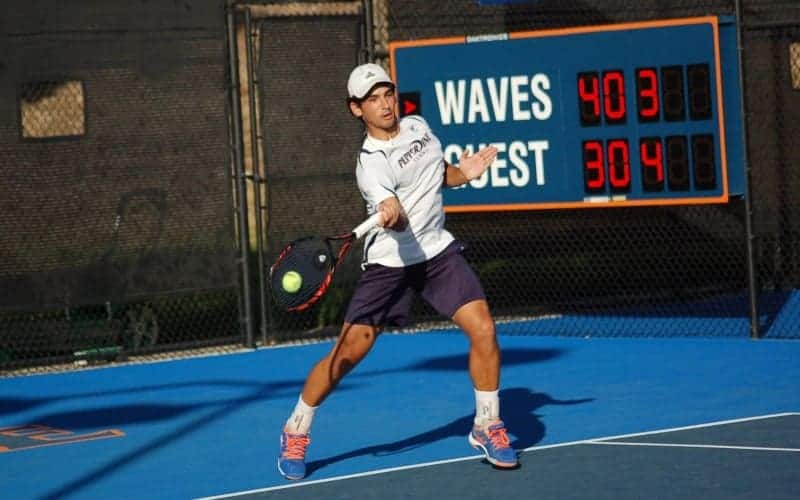 For someone who is not familiar with the game, the scoring system used in tennis must seem very strange. In almost every other sport there is a consistent number of points awarded for a particular method of scoring. In most racquet sports, one point is awarded when a rally is won. In tennis, whilst all points are in truth worth the same, they are not represented by the addition of a consistent number to the scoreboard.

There is a lot of debate as to the origin of the tennis scoring system. Some have suggested that the scores represent positions on a clock face, whilst others believe that they represent how far you were allowed to move forward into the court when serving in a precursor of the modern game. Whatever the real reason is, the quirky and archaic scoring system seems to be here to stay. So how do we read the scores in a tennis match?

In brief, within each game scores increase from 0 to 15 to 30 to 40 as points are won. If a player wins the next point when they are on 40, they score 1 game – but only if their opponent is not on 40 too. In that case, they would need to win two successive points to win the game. 6 games give them a set, but they must have a 2-game lead.

A ‘tie-break’ game is played at 6-6. Two or three sets wins the match, depending upon the format.

Reading A Tennis Score On TV

When reading a tennis score on TV, you will have the score right next to the players’ names. You will usually have one column for the set score, one for the game score, and one for the point score. You can see the scoreboard above and what each column represents. Below you will find some context behind the meaning of each of the terms above.

When a match starts, one player begins the points by serving for a whole game. Every time a rally is won, a winning serve is struck, or a double-fault (two successive serves which fail to land in the required area) is served, one of the players scores a point. As briefly explained above, this does not normally add just one to the player’s score. Instead, the first point scores 15. The second point won by a player increases their score to 30, and the next brings them to 40.

The score will be announced with the score of the player serving given first, so it might be 15-0, or 30-15. If a player has not won a point in the game, their zero score is described as ‘love’ in English. It is believed that this might derive from the French word ‘l’oeuf’, meaning ‘egg’. If the score is even at one or two points each, it is announced as ‘fifteen all’ or ’30 all’. If the score reaches 40-40, this is described as ‘deuce’.

This process continues until one player wins two successive points following a score of deuce. This means that games can continue for some time. When the game is eventually won, one is added to the winner’s game score, and the player who had not been serving does so for the next game.

The game score within a set is much simpler to interpret than the point score. Essentially, each player takes it in turns to serve for a game, as described above, and each time a game is won, the winning player adds one to their game score.

It is normally the case, especially in men’s tennis where the players are physically bigger and tend to serve harder, that it is easier to win a game when serving than when receiving the serve. For this reason, if a player wins a game during which their opponent was serving, this is described by commentators as a ‘break’ of serve, and is considered to represent a significant advantage.

A set is normally won when a player accrues six games, as long as they lead by at least two. Thus, a set can be won 6-0, 6-1, 6-2, 6-3 or 6-4, but not 6-5. Normally a set can be extended to allow a player to gain the necessary two-game lead, so a set can also be won 7-5. A limit has been set in recent times to prevent sets from taking an excessive time, so if the set reaches six games all it is decided by a special tie-break game, and the winner of this is awarded the set 7-6.

If a set reaches 6 games all, it is decided by a tie-break. In this special game, the first player to serve does so for just one point, and thereafter each player serves for two points in succession. The scoring is much simpler than in a standard game, in that each point won simply adds one point to the player’s tie-break score.

To win the tie-break, and hence the set, a player must be the first to accrue 7 points, but as usual they must be two points ahead. If the tie-break score reaches 6-6, the game continues indefinitely until one player gains a two-point lead. In some formats, particularly at club level and in some professional doubles, the final set of a three-set match is replaced by a longer tie-break, in which 10 points are required to win. These ‘Championship’ tie breaks otherwise work identically to normal ‘set’ tie-breaks.

The scoring system used in tennis is unusual, but it is one of the things which gives the game its special character. When you have played or watched enough tennis, following it will become second nature.