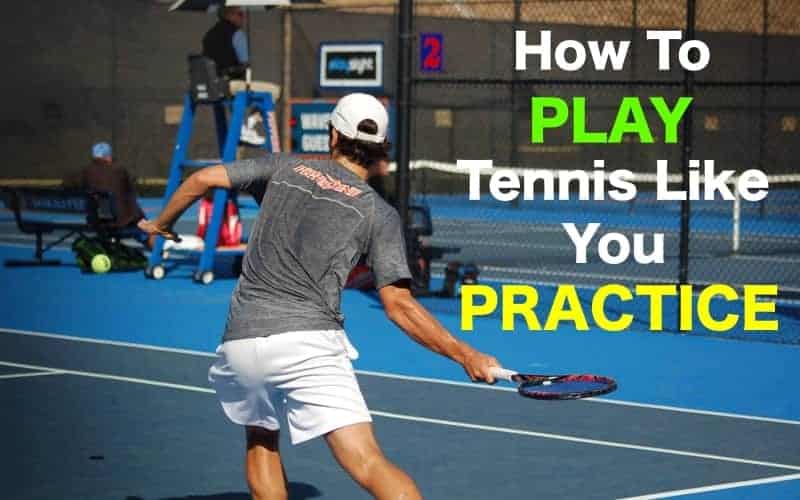 In tennis, just like in pretty much every other area of our lives, practice makes perfect. In order to dominate such an amazingly complex sport, you need to practice a lot. It is estimated that, in order to fully master the sport (at the top pro level), you need to complete at least 10,000 hours of practice. So if you’re trying to get better, nothing will be better than spending time on the tennis court.

One frequent problem we see with tennis players is that they can feel their improvement when they are practicing, but when it comes time to play matches, they feel like all their hard work went down the drain. Trust me, I can definitely relate to that – I suffered from the same issue until I was 14 years old. I had such a good work ethic for being young, and my coaches could see that I was on the right path. And yet, when it came to matches, I would always underperform.

I remember it vividly one time when I was 12 years old and I had just lost by 6×1 6×1 in the first round of a tournament and my mom told me – in an attempt to be supportive – “I think you did good son! It was not an easy match, I actually saw the other kid getting angry at one point!” So yes, I was pretty bad. But eventually, I got better and better at playing matches, and I ended up loving the thrill of playing a tough match.

Below we will cover this topic a little more in-depth, which should help you identify the reasons why you underperform during matches and help you fix whatever is going on.

Identify Why You Underperform In Matches

The first step to getting better at playing like you practice is identifying the reason why you underperform when you play. There are several different reasons why that could be happening, including nerves, bad footwork, too many mistakes, or a lack of tactics. Identifying the reason will help you come up with a good game plan to get better.

One of the main reasons why people cannot play tennis as well as they practice is because they get too nervous. Sometimes we build up too many expectations, especially if we have been practicing a lot and we want to show how much we have improved. The problem is that when that happens, your muscles inevitably get tense and your feet stop moving. And as you must know, you need to move your feet well and feel relaxed in order to play your best tennis.

I’ve struggled with nerves for a good part of my tennis career, and I know how frustrating it can be. You may even be telling your body and your brain that everything is going to be ok, but your stubborn brain still does not believe you. Even though this can be quite annoying, it can definitely be fixed pretty easily if you follow some of the tips we will go over below.

The second reason why you may not be playing as well as you would like is that you don’t have a great footwork. If you are not used to playing a lot of matches, your footwork will be based on how you practice – which is very different from a real match. During a match, you are usually under different conditions, and your footwork needs to match them. The problem is that when things aren’t working well, we tend to focus too much on our upper body and on where the ball is going – even though the majority of errors are caused because of poor footwork. So if your footwork is not working well, you may be missing more shots than you are used to.

Sometimes you may feel like you make a lot more mistakes when you play than when you practice. And chances are you are right. This issue can happen because of several reasons, including you being too nervous, your footwork not working great, or your opponent hitting shots that you are just not used to. Regardless of the initial reason why we are missing more than usual, the main problem is that we tend to get too caught up on our errors. And the more we focus on our past errors, the more negative we become and the more future errors we are bound to make.

Don’t Know Where To Hit Shots

One of the big challenges when you’re playing (especially for beginners) is knowing where to hit shots. Usually when you are practicing you know exactly what you are supposed to do and where you’re supposed to hit shots, but when you’re playing a match you have a lot more freedom. And along with the freedom comes the necessity of making quick decisions. If you’re not used to playing that much, you like don’t have tactical patterns ingrained in your brain – and that can make it hard to know where to hit shots. And at the end of the day, if you’re hitting shots in the wrong places, you’ll feel like you are not performing as well as you should be.

The reasons we mentioned above are by no means the only ones why you’re not playing like you practice – they are just the ones we see very often. So we suggest that if you haven’t yet identified the reason behind your struggle, you do some reflecting in order to find the underlying issue. Once you have identified what’s really going on, you can move on to the practical steps below and get to work.

If you want to play like you practice, you need to practice like you play. You can’t just do hand-fed drills and expect that you will be ready to play matches. You need to get used to match situations, different shot variations, and to the footwork you need to use when playing an actual match. So one important step in order to optimize your game is to incorporate game-situations into your practice. Ask your coach (or work on your own time) to add points, baseline games, and match situations to your practice. By getting used to situations like playing a 30-40 or playing with the wind will help you get much better at playing matches.

Great news – you can actually work on your game without being on a tennis court. We are big believers in the importance of the mental side of tennis, and therefore we think you can benefit greatly from practicing that. Even working on it for 10 minutes a few times a week can bring a lot of benefits. When you’re working on it, you should find a quiet place, close your eyes and try to visualize yourself playing a match. When you do that, try to identify how your body and mind feel and try to imagine how you would win points. This may seem strange if you haven’t done it before, but I’m telling you that this automatically transfers to your on-court game. I’ve done it and I recommend it.

Finally, there’s nothing – I repeat, NOTHING – that will help you play at a high level like actually playing matches. Even though you may get frustrated or discouraged at first, you need to push through and continue playing matches and tournaments. You will eventually learn a lot about your own game and start feeling more comfortable on the court – and your game will skyrocket.

I went through this process during my last year of juniors, when I was 18. I knew it would be my last opportunity to play a Grand Slam, so I decided to go all-in. I went to Europe and I decided to play tournaments for 12 weeks in a row, with no breaks. Even though I – by a miracle – was able to play the qualifying of the Junior French Open, the trip was an absolute disaster. In 12 weeks, I won a total of 5 matches. Out of those 5, only 1 was in the main draw. And even though it was an incredibly tough experience, I learned a lot from it and as soon as I came back I reached the semi-finals of a professional tournament. So if you take one thing out of this article, is that you have to play, play, and play!

There are several reasons why you may not be able to play as well as you practice, but the good news is that you can actually overcome any of those reasons. Whether you feel like you get too nervous, like you make too many mistakes, or like you just don’t know where to hit your shots, you will eventually get better at it. By following the tips we mentioned above, you will one day feel like you were born to play tennis matches!

link to The Top 10 Best Tennis Academies In Florida

Florida boasts warm weather all year round, which makes it an ideal location for tennis. As a result, it boasts a number of excellent academies. There are 11 key features that the best academies...

If you are a young tennis player with ambitions of getting to the top or the parent of a promising junior, you are probably looking for a tennis academy that can help move you or your child to the...