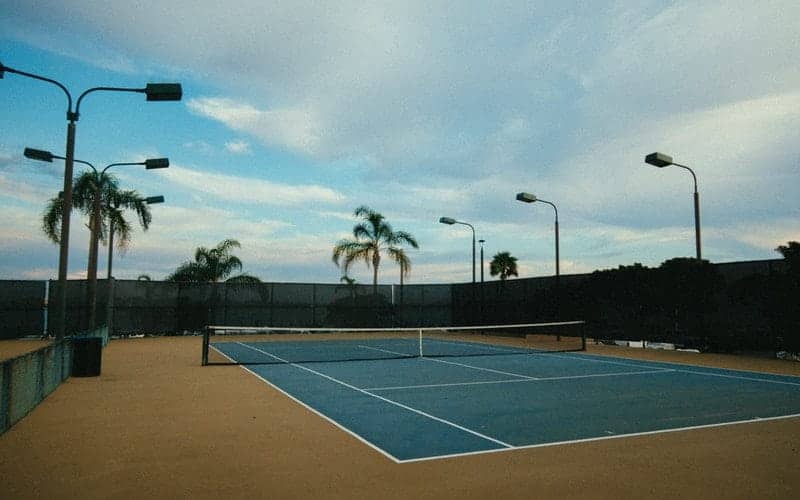 If you are based in the US, you can pay a wide range of prices to play the game. You might choose to spend thousands of dollars per year to play at an expensive country club, but you can access free or very cheap public courts in many areas. A study on Numbeo.com shows the USA to be the 46th most expensive country to rent a tennis court for an hour, out of 103 surveyed.

In the US, tennis players can find a wide availability of low-cost public courts alongside more expensive options. In the summer, the USA offers many great opportunities to play tennis at a low cost. However, in the winter, more expensive indoor courts may need to be used to continue playing in colder areas.

The average cost to rent a tennis court is $15.72 per hour. A public hard court normally costs between zero and $10 per hour, assuming that you don’t choose to pay for coaching or lessons. If the weather forces you to play indoors, a court can cost over $40 per hour in more expensive areas.

It will generally be cheaper to play in warmer areas where you can play outside all year round.

Choosing to play on a private or public tennis court comes down to whether you want to play somewhere boasting beautifully maintained courts, with other facilities such as golf or swimming possibly included, or you are focused on the game of tennis and want a smooth surface with the right markings and a net.

If it is all about hitting balls for you, and ambiance does not matter, you should try to use the excellent public facilities across the country. Some schools and colleges will also make their courts available cheaply or even for free when they do not require them. There are even private courts available for the residents’ use in some communities without the need for a fee, although obviously, these are not necessarily cheap places to live.

The question is, why might you want to pay more to use private tennis courts? The ambiance and other facilities are two reasons. Still, you might also be prepared to pay for better coaching, organized play, competitions, and access to more and higher standard opponents, as well as a social element. Nonetheless, if you want to play a lot, public courts are hard to beat on a budget.

If you live in Florida or in another state boasting a warm climate, there probably won’t even be any indoor courts. Why should there be when, even in the winter, temperatures tend to remain in the 70s or warmer? It is a very different matter in more northerly areas. Two feet of snow can make it very difficult to enjoy a nice game of outdoor tennis.

In colder states, indoor courts are a must if you want to play all year round. Indoor courts are almost always more expensive to play on than outdoor ones because they cost a lot more to construct.

While the cost will vary substantially from area to area and depend upon the building or dome’s construction, you should expect to pay $40-100 per hour for the privilege of playing tennis on an indoor court and being protected from the elements while you play.

You will certainly need to have a substantial budget if you want to play tennis through the winter in colder states, but you have a little option if you don’t plan to move to Florida.

The ideal place to play tennis is an area where there are plenty of free or cheap outdoor courts available, and the weather is generally favorable.

According to Numbeo.com, the US’s cheapest place to play tennis is Albuquerque, New Mexico, with an average hourly court cost of under $4. This reflects that virtually all of the courts there are likely to be outdoor, and it is not, in general, the most affluent area.

At the other end of the scale, Philadelphia, Pennsylvania, tops the chart with an average hourly cost of around $42 per court. This reflects the greater prevalence of indoor courts, amongst other factors. Essentially, if you want to play tennis frequently and cheaply, you need to base yourself in the South.

The majority of courts in the US are hard courts, which are relatively cheap to install and require little maintenance. This is why they can be rented out at a reasonably low cost. There are other options, and serious players might want to seek out clay courts, putting far less strain on the joints, or even traditional grass.

The International Hall of Fame Club at Newport, Rhode Island, offers both clay and grass courts, as well as a fairly large portion of that ambiance I mentioned earlier. Two people can play on the grass courts for around $130 per hour, whereas the clay is slightly more affordable at around $40 per hour.

These are not the cheapest courts of their type, but this gives an idea of the premium you may need to pay to play on less commonplace surfaces.

How To Find Free Tennis Courts

A simple internet search of courts in your area might help you to find the best options for a free game. If this does not work, the USTA offers some useful search tools on their website, which will summarise the details of the available public and private options close to your location. Check out courts in parks or schools, as these are most likely to be available for free.

Whatever your financial status, you will find many opportunities to play tennis, although you may need to be hardy or to have a bigger budget in the winter. While it can be expensive, tennis can also be surprisingly affordable.

If you decide that you want to improve your tennis, or you are a beginner who would like to learn to play, you will want to locate a coach who has experience of working with players of your...

Continue Reading
link to How Much do Tennis Lessons Cost?

Whatever the standard of your tennis, there is always room for improvement. If you are looking for advice on how to hit the ball better and more consistently (technical), or using your shots in a...