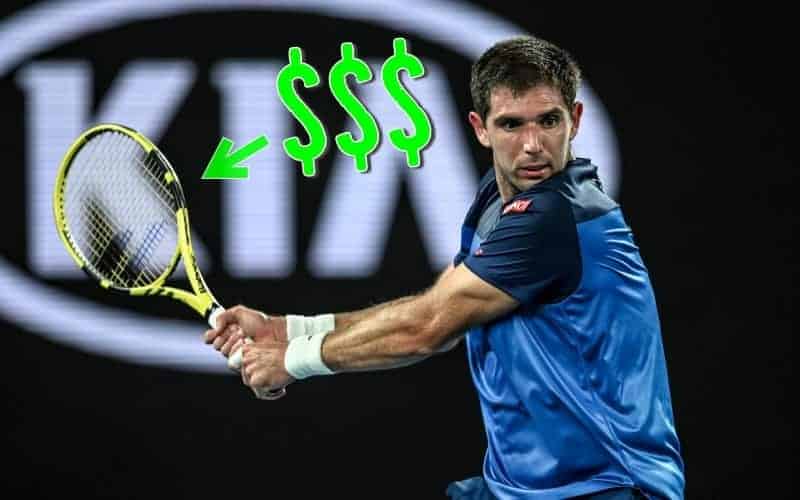 Many club players only think about getting their racket restrung when they suffer a breakage. Unless they are a big hitter who frequently breaks strings, it is very likely that they have been suffering from a deterioration in string performance for some time prior to this. Strings lose tension and elasticity over time, which means that it becomes gradually harder to develop power and spin.

The player may not notice this, as the change happens gradually, but it is very likely that they would be able to play better tennis if they got their racket restrung more frequently. One thing that might discourage players from obtaining the restrings they need is the potential cost.

The average cost to restring a tennis racket is $40, but it can range from $15 to $75. Costs are split between labor ($10-25 per racket) and strings ($2-50 per set). Players should string their racket as many times per year as they play per week. Stringers can be found at your local club, sports shops, or online.

Given the right equipment, anyone can string a tennis racket. However, it takes skill to produce consistent results and a tidy finish. Furthermore, it will take a beginner using a cheap machine up to two hours to complete a stringing job, and the resulting tension is not likely to be particularly accurate.

An experienced stringer using a good quality machine can complete the job in around 30 minutes, consistently producing something close to the desired tension.

Stringers will generally charge something between $10 and $25 per racket for the work, the difference reflecting the local cost of living, and the experience and overheads of the stringer.

For example, a top-quality stringing machine can cost thousands of dollars, and if the stringer is based in a shop there will be other expenses that they need to meet. At the professional level, players typically have contracts with stringing companies to do all of their stringing at tournaments and throughout the year, costing as much as $40-50,000.

There are many different types of tennis string, ranging from very cheap nylon to surprisingly expensive multifilaments and natural gut. The ‘big names’ in the field, such as Luxilon, tend to charge a premium for their strings.

Tennis strings can be bought in individual ‘sets’ containing enough for a single racket- around 12m – or reels typically containing 100m or 200m. You will not be surprised that it is significantly cheaper per set to buy string in reels.

This is one way that stringers can make money, as they can charge the same or slightly more than the standard price for an individual set, while paying markedly less by buying reels. As a customer, you normally have the option of buying your own string and just paying the stringer’s labour charge. This means that you can take advantage of the cheaper rate obtained by buying a reel, but you do need to be fairly sure that you are going to stick with one string type, as you may take some time to work your way through 16 restrings!

As an illustration of the kind of prices you might pay for string, Tennis Warehouse is, at the time of writing, is charging the following.

The Ashaway string is very much at the cheap end of the scale, and will not be very durable, but it should still have reasonable playability. The Luxilon 4G is a good polyester string, and natural gut is probably the most expensive type of string. Prices will vary, but it is generally cheaper to source string yourself than to buy it from a stringer.

How Often Should You Get A Racket Restrung?

The answer is not just: ‘When a string breaks’, as performance will have been declining for some time prior to that for the reasons explained earlier.

The general rule is to replace your string after about 50 sessions, which equates to the well-known rule that players should string their racket as many times per year as they play in a week.

However, some string types, like natural gut, are unlikely to last that long. Polyester is durable but is thought to lose some of its performance after about 20 hours of play, suggesting that restringing every couple of months might be better if you use polyester strings.

Where Can You Restring A Tennis Racket?

For many, the answer will be: ‘At your local club’, as there will generally be a stringer on hand. Depending upon their experience and the machine they use, this may not always be the best answer.

Other options of locations to get rackets restrung include sports shops, where a stringer may be employed, and various specialists whose services can be booked online. Once you find a stringer whose work you like and who charges a reasonable price, stick with them, as this way you can expect consistent results and no surprises.

If you need a lot of restrings, purchasing your own machine can be an option, as you will soon recoup the initial outlay.

Stringers are generally happy to carry out additional racket maintenance, such as replacing grommet strips or grips. They will charge a small fee for this, but if you are not confident to do the job yourself it makes sense to get it done by a professional.

Rackets need to be restrung regularly if they are to perform at their best. Stringers charge a wide variety of fees, but you need to find an experienced stringer with a good quality machine to guarantee consistently good results.

link to Do Tennis Strings Go Bad? Know When You Need Fresh Strings

If you just picked up your racket for the first time in a while, the strings may look a bit goofy. Maybe you just got the tennis itch again and you’re playing much more than you used to, so...

When choosing the equipment to use, it is important to be well informed about what you’re looking at in order to know what will work best for you. Whether it’s strings, rackets, shoes, grips, or...