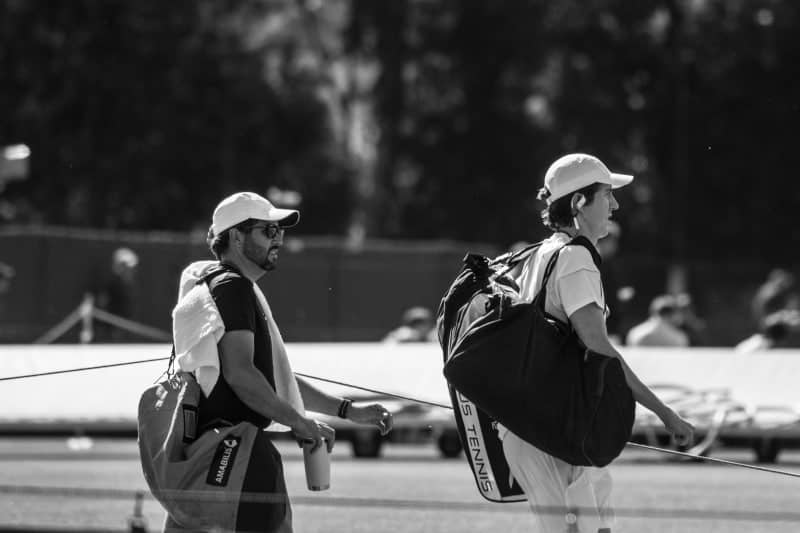 If you want to reach the best level you can in tennis, whether you are a middle-aged beginner, an up and coming junior, or a leading professional, you will probably make use of the services of a coach. The coach’s job is to help improve your technique and help you devise and implement the most effective tactics. They will also help you develop helpful mental skills and provide basic advice on physical conditioning and warm-ups.

The coach’s role is a crucial one for most players, and many coaches have spent years training and practicing to reach their current level. Whether you are interested in following this career path yourself or just want to know how much you should expect to pay for coaching, it will be useful to know how much tennis coaches typically earn.

Top tennis coaches usually receive about 10% of their player’s prize money income. An instructor, on the other hand, might receive less than $20 per hour, rising to $30 per hour or more for experienced coaches. College coaches generally get a similar hourly amount, but their earnings are steadier as they receive an annual salary.

The best-paid coaches will generally be those working with the leading players, although they may have to share the job and the income with other coaches, as top-ranked players tend to have large entourages.

At this level, coaches will be expected to travel with the player to tournaments around the world, but they can earn large amounts of money if their player is successful.

A traveling tennis coach might receive a basic salary in the range of $50-200,000 per year. This will be all they get at the lower levels, but players on the ATP and WTA tours will generally pay a percentage of their prize-money earnings to their coach, typically between 5 and 15%.

With the highest-ranked players earning over $10 million per year, this means that their coaches can also be extremely well remunerated. Their travel and accommodation will be paid for by the player, which is another very significant benefit.

The downside of traveling coaches is the lack of security. The recent pandemic has brought this into focus for many, as when their player stops earning, so do they, other than any basic salary they might get. Similarly, if the player suffers a serious injury or decides to fire the coach, the coach will lose their income.

On top of this, they need to fund any healthcare or pension benefits themselves. Perhaps this explains why many coaches look so stressed when their player is in action!

College tennis coaches will be under pressure to produce results to demonstrate their program’s value. This is particularly significant at present, with costs associated with the pandemic causing some tennis programs to be cut back or even shut down.

Having said this, college tennis coaches receive an annual salary, which is likely to be supplemented with various benefits. This means that their income is far more secure than that of a traveling coach or many club coaches.

Club coaches and instructors are likely to be primarily paid on an hourly basis. This means that they have some control over their income, as they are likely to have some freedom over how many hours they work.

Of course, this is likely to be seasonal, with summer offering the most opportunities to recruit pupils, so coaches who do not have an indoor facility or work in a warm, dry area will tend to work more hours in the summer than in the winter. Some instructors will just coach in the summer and get another job in the winter.

The average hourly rate for an instructor in the US is around $18, so if they cannot obtain a great deal of work, their coaching income will below. A club coach will earn a little more than an instructor, typically somewhere in the range of $20-30 per hour.

Again, their income is likely to be seasonal, but larger clubs or academies may choose to pay a basic salary or retainer to keep good coaches. An academy coach will probably earn something similar to a college coach, although they may have more scope for supplementing their income.

The coaches who earn the most are likely to be those who travel with the leading players. Typically they might receive 10% of their player’s prize money, although this percentage can vary. This will bring in more than $1 million per year for coaches working for the most successful players.

In all likelihood, however, the coaches with the highest income are likely to be those who operate large academies and work with top players. It has been claimed that Nick Bollettieri is still the highest-paid tennis coach due to the income from his successful academy, although no figures are available.

By the same token, Patrick Mouratoglou is likely to be a high earner. His academy is becoming increasingly high profile, being associated with some leading names in the sport, and he also works with Serena Williams.

Tennis coaching is a satisfying and enjoyable career. It does not pay well at the lower levels, and at the elite level, it is lucrative and insecure. Nonetheless, there are many less pleasant ways to earn a living.