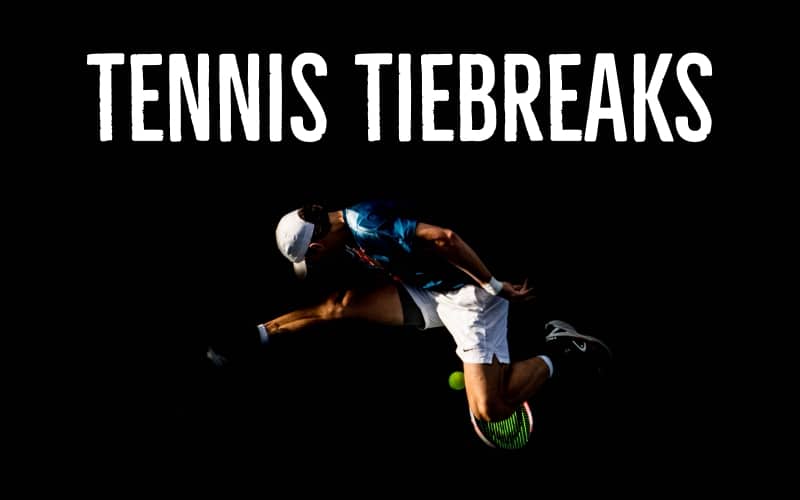 Over the past decade, there have been many great matches and moments that have caught the attention of tennis fans. One of the most remarkable ones took place at Wimbledon in 2010. One first-round matchup was the American John Isner against the Frenchmen Nicolas Mahut. On paper, it should have been an easy win for Isner who was ranked 19th in the world back then. What followed however was the longest match in tennis history. It took over eleven hours until the American finally won with a score of 70:68 in the fifth set.

In order to avoid these marathon-matches in every tournament, the American Jimmy van Allen invented the first form of the Tiebreak in 1954. It wasn’t, however, until 1971 that the Tiebreak we know it today was devised by Peter Johns and officially made it into the tennis rule book.

What Does Tiebreaker Mean In Tennis?

A tiebreaker is the crucial part of each set where every point matters much more than during the games. Essentially, it is a special game developed to break a tie in a tennis match. It’s a quicker way to decide sets and matches to avoid matches like the Isner-Mahut match in Wimbledon in 2010.

The rules are simple. The player who gets to seven points first (or if it’s still tied 6-6, leads by two points) wins the Tiebreak and the set.

The player who returned serve in the last game of the set has the right to start the tiebreak serving from the right-hand side of the court. After the first point, the serve changes and the other player has two serves with his first one coming from his left-hand side of the court. There is always a change of serve when the sum of the points is an uneven number. After one point, three points, and so forth. The reason for that is so the winner must win at least one point when the opponent is serving. It’s a so-called “mini-break”.

After every six points, players need to switch sides. During this switch however they are not allowed to sit down. They are only supposed to walk to the other side and only quickly get a sip of water if needed.

The same principle as in singles applies – the pairing which returned serve in the last game before the Tiebreak starts serving. The following two points shall be served by the player of the opposing team due to serve next. After that starting with the first team, each team’s player whose turn it is to serve next, serves alternately for two consecutive points until the end of the tie-break. In order to make doubles matches more enjoyable for the viewers, the tennis governing bodies decided a few years ago to replace the deciding set in with a ten-point Tiebreak. This rule is in place for all tournaments except at the Grand Slams.

The rules for the 10-Point Tiebreak are almost identical as for the regular one, with the main difference being that the player who reaches 10 point with a two-point margin wins. If the score is 10:10 it continues until one player has a two-point lead. There is also a change of sides after the first sixth point and subsequently after every sixth point.

Nowadays all double competitions are playing a 10-Point Tiebreak instead of a deciding set. On the singles tour it is played at the Australian Open to decide a 6:6 tie in the deciding set.

The Longest Tennis Tiebreak Ever

The longest Tiebreak ever happened in 2013 at a Challenger Tournament in Plantation Florida. Benjamin Balleret defeated Guillaume Couillard in a 70-Point Tiebreak 7:6 (36:34), 6:1. Even though the match was played without line judges or a chair umpire the match score was verified by the ITF and ATP.

The score for the longest men’s singles Tiebreaker in an ATP main draw was 20:18, which happened numerous times. One of which was between Roger Federer and Marat Safin in the Semi-finals at the 2004 Tennis Masters Cup in Houston. The Tiebreaker which Federer won with a score of 20:18 lasted 26 minutes.

Tiebreaks have been a great invention in many ways. They add more excitement as every single point counts. It can also lead to surprising results and upsets if for example one of the top players has a few bad moments and commits too many unforced errors. In addition to that it favours players with a great serve as it is crucial to get “mini-breaks” to win a Tiebreak.

They are also essential to keep the games shorter. This can be vital for players in a Grand Slam, as they have little rest between the games and nobody wants to be on the court for eleven hours. The invention of the 10-Point Tiebreak also helped save the popularity of doubles matches. It made them shorter and more entertaining to watch.