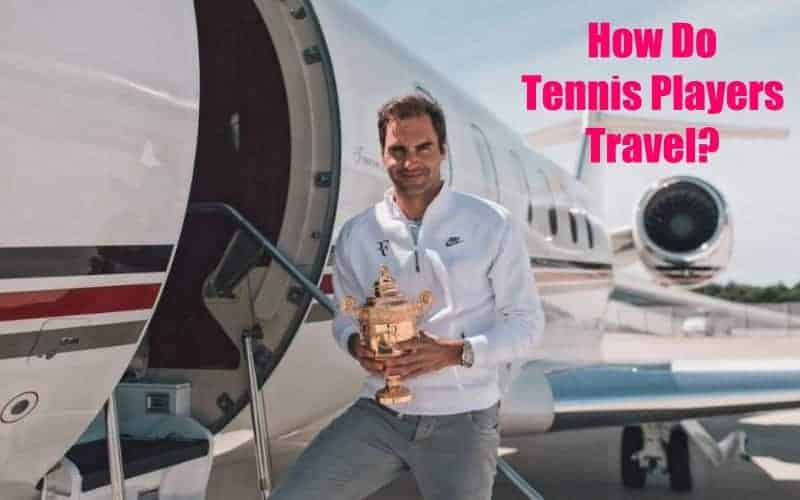 Tennis is usually thought of as a pretty “luxurious” sport, since players are known for making millions of dollars and traveling around the world. Which one of us wouldn’t like to live that lifestyle – even if just for a few weeks?

It’s not uncommon for tennis players to play in 4 different countries in 4 consecutive weeks. While we usually only think about how cool that is, we often forget to think about the logistics behind it. If you’re traveling around all the time, that means that you need to figure out how, when, and how much it will cost for you to go to those places. While most of us rely on our cars for transportation, professional tennis players cannot afford to spend hours and hours inside a car going from one place to another.

So how do tennis players normally travel? Players often choose different types of transportation depending on the level of the tournaments they compete in. Bigger tournaments usually offer local transportation, but players need to travel a little further to play those. On the other hand, smaller tournaments are often geographically closer to each other and require less traveling. In general, tennis players travel by plane (private jets, first-class, or economy), train, or car.

It goes without saying that Roger Federer will normally travel a little differently than a player who is ranked 1000 in the world and cannot even financially break even. A player will usually travel according to what he or she can afford – and we’ll go a little more in-depth on how players at different levels usually travel.

It’s natural to assume that, since tennis players make so much money, they would be flying around with their private jets all the time. However, the reality is quite different from that. Only a handful or two of players can afford flying in private jets, and they are usually players like Roger Federer, Rafael Nadal, and Serena Williams. Instead of owning their own private jets, however, they most likely have fractional ownership – which means that they share the ownership of the jet with others, and can use it whenever the plane is available.

By doing so, these professional players can travel with a private jet and still keep costs reasonably low (for their standards). Federer has been a partner of NetJets for over a decade, which makes it even easier for him.

Probably the most popular method of traveling among the top tennis players, first class flights are a great alternative to combine comfort and cost-effectiveness. By buying first class tickets, the players can move from one country to another without feeling exhausted after the flight. When they fly first class, they are also able to maintain a certain level of privacy, which is also highly desirable for some players. For those reasons, flying first class is the preferred way to travel for the majority of top-ranked ATP and WTA players.

The majority of tennis players, however, needs to travel in economy class in order to keep costs low. These are players ranked from about 100 until 1500 in the world. Since they cannot make enough money to cover the costs of flying first class (or even business), they need to stick to this more affordable way of flying.

Trains can actually be a great way for players to travel – especially around Europe – if they are trying to keep costs low. Since in Europe tournaments are closer to each other than let’s say in South or North America, players are often able to travel between tournaments by train.

An important factor when thinking about how tennis players travel is how often they do it. Some players play more frequently than others, and as we previously mentioned, playing some types of tournaments will require players to travel further than others.

In order to give you a better understanding of the differences, we will analyze the calendars of 3 players who played different levels of tournaments in 2019: Dominic Thiem, a top 10 who only plays ATPs and Grand Slams; Facundo Arguello, a top 350 who pretty much only played Challengers; and our MyTennisHQ team member Austin Rapp, who played mostly ITF Futures.

As you can see below, a top 10 player travels very frequently and to distant places. In 2019, Thiem went to Australia, South America, North America (2x), Europe (3x), and Asia. On top of that, these levels of tournaments often have a few weeks between them (which means that the players might choose to go home in between them). So these players are not only flying frequently, but very long flights (12 hours or more).

Players who play mostly Challenger tournaments are still required to travel a bit, but the flights are usually significantly shorter. As you can see below, Facundo Arguello was able to play his whole calendar mainly staying in South America and Europe.

Finally, players playing mostly ITF tournaments are usually able to travel significantly less. Austin played the whole 2019 year in only 2 countries, US and Mexico. In addition, you will notice that these tournaments are often either in the same location or at least the same state. This means that players can even choose to travel by car if they wish to do so.

How Much Players Spend

Based on the calendars above, you can see how expenses will differ depending on the level of the tournaments played by the player. Players at the ATP levels need to purchase tickets for longer flights, and they usually fly business or first. Based on that, their flights will cost on average $1,000 to $1,500. On top of that, these players usually travel with a whole team (+3 members), and they are responsible for paying for those tickets as well.

Players in the Challenger levels need to travel internationally, but they usually play several consecutive tournaments on the same continent. They usually travel in economy class, with maybe a few business class tickets. Based on that, their average cost per ticket is usually $400 – $700. These players usually travel with one coach, and they are responsible for their coach’s ticket.

Finally, players in the ITF level can find much cheaper flights, considering they are usually for domestic flights. They are on average $100 – $300 per ticket, which highlights the difference in expenses for an ATP and ITF player. These players normally travel by themselves, in order to cut back expenses.