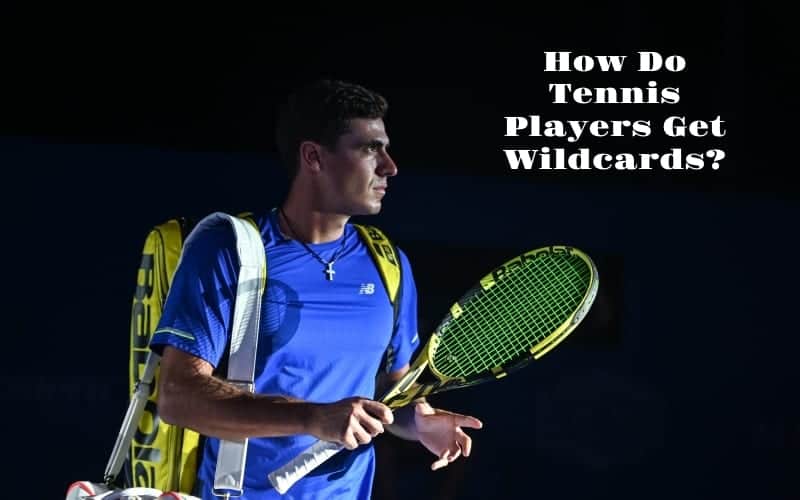 Tennis is an extremely difficult sport to break into. You are not drafted by a team if you show some signs of talent, you cannot join a practice squad, and there are no try-outs for tennis. No matter if you are one of the best junior players in the world or if you have never played a tennis tournament before, you need to start climbing the professional tennis ranking ladder from the absolute bottom.

Only when you start doing well in smaller tournaments (called ITF futures) can you move up to the next level – called ATP Challengers. After doing well in Challengers, you will finally move on to ATPs and Grand Slams, which are the tournaments you usually watch on TV. The journey to the top is long and difficult, and many players end up getting stuck in the middle. But there is one way that usually speeds up the process: wildcards. Only a few people get them at each tournament, but they can change a player’s whole career.

So how can tennis players get these wildcards? Wildcards are usually awarded by a tournament’s organization, and these organizations normally give them to five different types of players: local players, young and up-and-coming players, players returning from injuries, winners of wildcard tournaments, and recipients of wildcard swaps. These invitations are given to players who the tournament’s organization thinks fans will like, so at the end of the day, all a player can do is ask for the wildcard and hope for the best.

Below we will get more in-depth into how an organization decides who it will give the wildcard to, and we will explain the five types of players mentioned above.

What Is A Wildcard?

Each event, whether it’s a main draw or qualifying one, only has a certain number of spots reserved for wild card players. In Grand Slams and a few big ATP/WTA events, the number of wildcard spots can get up to 8. On some smaller tournaments, that number can be either 2 or 4. Needless to say, there are more people begging for those spots than wildcards to give. For that reason, the tournament’s organization needs to be pretty selective as to who they give those spots to. Below we will cover the main criteria those organizations use when deciding who will get those highly desirable wildcards.

The first players to usually get wildcards are players who live in the same city, state, or country where the tournament is played. Tournament organizations do this in an effort both to bring local fans out and to give local players an amazing opportunity. Depending on the location of the tournament, it may or may not be the only opportunity during that year that a player will have to play a big tournament, and if he or she does not qualify for it through rankings, the player will certainly need a wildcard. These organizations often have multiple candidates for the wildcards, and more often than not there is a certain degree of lobbying that happens behind the scenes when deciding who to give the wildcard to.

Next, it is very common to see wildcards given to young and up-and-coming players who have a growing fanbase. These are players that people expect to have enough ranking to join the tournament through rankings in the future, but who don’t have the ranking just yet. By gifting them with a wildcard, a tournament expects to be the first place where those players draw national attention by defeating a big-name player. Up until recently, young players like Andrey Rublev, Denis Shapovalov, Felix Auger-Aliassime, and Janik Sinner all had to receive wild cards in order to participate in the big tournaments.

Other common recipients of wildcards are well-known players who are coming back from injuries. These players usually have had to take some time off the court, and they may have lost their ranking as a result of that. By giving a wildcard to these players, the tournament’s organization is giving them an opportunity to get some valuable points back and return to the top sooner. In addition, this deal is also great for the tournament itself, as big-name players usually draw large crowds (which means more money).

Finally, another way of receiving a wildcard is through a wildcard swap. Some national tennis organizations have agreements in place where they exchange wildcards for tournaments. For instance, the United States Tennis Association and the French Tennis Federation have such an agreement in place where one wildcard for the US Open goes to French players, and one wildcard for the French Open goes to American players. It is then up to the foreign organization to decide who it will give the wildcard too. As we mentioned earlier, it is not uncommon for the organization to host a wildcard tournament in order to decide on who it will award the invite to.

Now that we have covered the main criteria used to award wildcards, we will go through a real life example and show what this really looks like. Not many tournaments have been held so far in 2020, but the Australian Open is a great example. In the Men’s Singles Main Draw, the following wildcards were awarded: